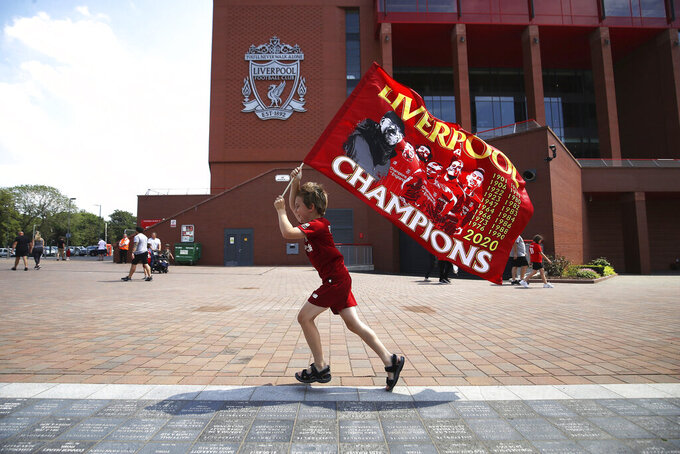 LIVERPOOL, England (AP) — From her doorstep opposite Anfield, Sue Humphreys has had a front row seat to the glory, grief and fall from grace at Liverpool Football Club.

The 69-year-old Humphreys has never known another view from a terraced house her family has called home for a century.

“I’m so lucky to be so close to it, because you can see how much it means to people,” she said. “Sometimes it’s a bit of nuisance but today’s amazing. Absolutely amazing.”

Her face bathed in the red glow from flares being set off 50 meters away, Humphreys was gazing early Friday morning at fans celebrating Liverpool being crowned champion of England for the first time in 30 years.

“We never thought it was going to be as long as it’s been,” she said. “Never.”

Celebrating titles had become a formality around here for the team and the Humphreys family. The home is forged in the club’s history. Bob Paisley even lived with Humphreys’ parents during his playing days. He went on to become the club’s most successful manager.

Six English titles were won by Paisley across the 1970s and 80s as Liverpool ruled English football. Jürgen Klopp can now bask in the adulation of delivering his first, elevating his status even more on the red half of Merseyside.

Being so revered sits uneasily with Klopp when discussing legendary predecessors Paisley, Bill Shankly and Kenny Dalglish, who won the team’s last English championship in 1990.

“We don’t have to compare me with these iconic figures,” Klopp said on Friday. “I came over from Germany, four and a half years, love the city, love the club but there is no comparison possible, and it is especially not needed.”

Klopp was wearing a hoodie emblazoned with champions across his chest. Hours earlier he had been dancing into the night with his players after Manchester City’s 2-1 loss to Chelsea guaranteed Liverpool the Premier League trophy with seven games to spare.

“I called my family 10 seconds before the final whistle,” Klopp said. “We had a FaceTime call. I told them I loved them, they told me they loved me. It’s sad I can’t be with them. I told them put the phone on the table and to leave it on. It was a really nice moment.”

Relief mixed with bliss after having overcome so much. The Reds last season collected enough points -- 97 -- to normally clinch the title, only to be denied by Manchester City by a single point.

“It’s felt like there’s been a curse over the place almost,” said Gareth Roberts of The Anfield Wrap podcast and website. “How close we’ve come to it and fail at the finish a few times.”

This time it was a procession that was only stalled -- and nearly thwarted -- by the coronavirus pandemic that led to an unprecedented shutdown of British society.

“I know so many people here in Liverpool and they tell me exactly how much it means to them,” Klopp said. “So I don’t underestimate that. It’s massive. Absolutely massive. When you have a successful football club in the city, it always gives people a lift. At this moment in time in the world, all cities need a lift.”

Klopp’s affinity with Liverpool has been profound. It’s why the former Borussia Dortmund coach is already signed up to lead the world, European and -- now English -- champions until 2024.

“A lot of Scousers are really, really good people. I come from a region where no one understands a word outside there, and Scouse is similar.”

Fans also see Klopp as chiming with the left-leaning social conscience of a port city which produced The Beatles and has often felt cut adrift politically and economically from the power and wealth of Westminster.

“We sort of demand that from managers, we do almost want them to be a political figure,” said Roberts, a lifelong fan. “Other jobs in football aren’t quite the same. We want them to say the right things. You want them to care about the city, the people of the city -- and he does. His politics fit in with Liverpool and he’s embraced it.”

It’s a city that has also had to endure not only unimaginable grief associated with Liverpool FC but a long quest for the world to know the truth about how 96 fans died in the crush at Hillsborough Stadium at the 1989 FA Cup semifinals.

“The cover-up around Hillsborough, the long campaign for justice,” Roberts said, “all of those things have fed into a character and identity of Liverpool and have created the people that we’ve got here. But ultimately, it’s a caring and friendly place. More and more the football club is reflecting that now as well.”

The connection with the club has never been more important as fans are unable to attend games due to COVID-19 restricting access to Anfield to 300 key personnel.