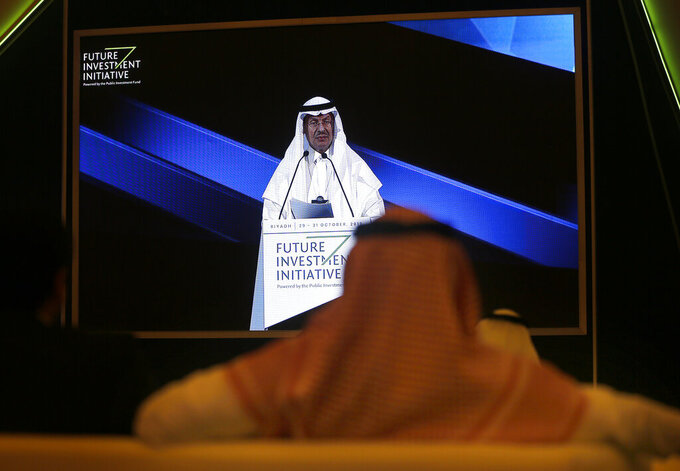 FILE - In this Oct. 30, 2019 file photo, participants watch Saudi Energy Minister Prince Abdulaziz bin Salman on a screen during his speech at the Future Investment Initiative Forum, in Riyadh, Saudi Arabia. The minister said Monday, Nov. 9, 2020, that global energy producers have the ability to tweak an agreement on production cuts that could be extended through the end of 2022, signaling the anticipation of continued weakened demand for crude as the coronavirus pandemic impacts consumption and grounds air travel for many. (AP Photo/Amr Nabil, File)

DUBAI, United Arab Emirates (AP) — Saudi Arabia's energy minister said Monday that global energy producers have the ability to tweak an agreement on production cuts that could be extended through the end of 2022, signaling the anticipation of continued weakened demand for oil as the coronavirus pandemic peaks again in Europe and the United States

“OPEC has been and continues to be taking a proactive role,” said Prince Abdulaziz bin Salman during the Abu Dhabi-sponsored ADIPEC energy conference, which is taking place virtually this year.

“We’re keeping our flexibility in our hands," Prince Abdulaziz said, without committing specifically to how far into the future cuts of 7.7 million barrels of oil a day or more could go on for.

“I don’t put policy lines ahead of reaching out to everybody,” he said.

The OPEC oil cartel, led by Saudi Arabia, and non-OPEC nations including Russia agreed in April to cut as much as 10 million barrels of crude a day, or a tenth of global supply, until July to keep oil prices from plunging amid lower demand for crude.

The so-called OPEC+ agreement aimed to ease those cuts to 7.7 million barrels per day through the end of the year, and to nearly 6 million a day for 16 months beginning in January.

The UAE’s Energy Minister Suhail al-Mazrouei also echoed confidence in the OPEC+ agreement, saying the deal has been working.

“We have also demonstrated as a group that we’ve been very disciplined,” he said.

The OPEC+ countries are convening again on Nov. 17, but there’s no guarantee they will be able to agree on deeper cuts into 2021 given that some countries are losing revenue amid existing quotas on production.

The virus has dampened the price of oil, affecting key revenue for oil producing nations. But positive news about the effectiveness of a vaccine by Pfizer on Monday saw stock markets rally and Brent crude, the international standard, shoot up well past $42 a barrel.

Still, there’s little guarantee of a rebound or quick vaccine rollout as major European cities reinstate various lockdown measures due to alarming spikes in new coronavirus cases ahead of the coming winter months and flu season.

Prince Abdulaziz said that while oil-producing nations are hopeful a vaccine can help mitigate the virus and help the world regain a sense of mobility, the current agreement can always be tweaked.

“The April agreement took into account what may happen and proactively decided to be prepared for the worst,” he said.

A new administration in Washington led by President Joe Biden could also impact demand for oil, particularly if he is able to power the economy again and control the outbreak of COVID-19 across the U.S., which has reached record highs in past weeks.

Biden could also impact oil markets if he is able to push through a stimulus package that boosts consumer spending or if he's able to cool down the trade war with China and re-engage with Iran, which could lead to the lifting of U.S. sanctions on Iranian oil exports. He could also return the U.S. to the Paris Climate agreement and reverse Trump administration rollbacks on fuel economy regulations, according to energy intelligence firm Rystad Energy.

Prince Abdulaziz said energy producing nations will handle whatever happens and that OPEC, which Iran is a party to, has managed in the past to handle reversals as they come.

OPEC Secretary General Mohammad Barkindo struck an optimistic tone for the future of oil, saying that while there's been a contraction of nearly 9.8 millions barrels of oil a day in 2020, forecasts for next year are being revised upward.

“There is no cause for alarm,” he said, adding that countries to the OPEC+ agreement have been complying with the cuts since May.

Similarly, Abu Dhabi National Oil Company CEO Sultan al-Jaber said at the height of the lockdowns in March and April the world still consumed 75 million barrels of oil per day. Oil demand, he said, only fell to below 90 million barrels a day for 12 weeks. It's currently around 92 million barrels per day.

“We know the world will still need oil and gas when all of this is done," he said. “We expect that oil demand will grow to over 105 million barrels per day by 2030."

Striking a more sober tone, however, Russian Deputy Energy Minister Pavel Sorokin said he does not expect a full recovery of air travel before two years.

Although he anticipates demand for oil will grow over the next decade, he said it will take two to three years for that demand to reach 100 million barrels a day again or close to that level.

He spoke as Russian media reported that the country's longtime Energy Minister Alexander Novak had been recommended for promotion to serve as deputy prime minister. Novak was instrumental in Russian negotiations with OPEC that led to global production cuts.