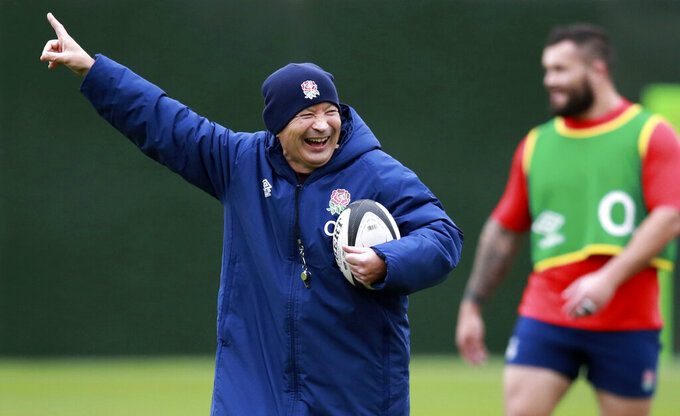 FILE - In this Friday, Oct. 16, 2020 file photo, England's head coach Eddie Jones gestures as he watches his players during an England rugby union team training session at Twickenham Stadium in London. England rugby coach Eddie Jones is isolating after being in contact with one of his assistants who has tested positive for the coronavirus, the team said Wednesday Jan. 20, 2021, in a blow to its preparations for the Six Nations tournament. (Dave Rogers/Pool via AP, File)

The world’s oldest international rugby championship is set to be modernized in the coming days, with private equity investment potentially propelling the Six Nations into uncharted territory in terms of widespread exposure and broadcasting deals worldwide.

By reportedly investing more than $400 million into the annual northern hemisphere competition, CVC Capital Partners has targeted an historic product it believes is ripe for growth globally.

That puts the Six Nations in the shop window as the 2021 edition prepares to begin on Feb. 6, barely three months after the pandemic-extended 2020 tournament concluded. Can Europe’s top teams deliver a spectacular championship to usher it into an exciting new era?

Take England, for example, the defending champion and the bookmakers’ favorite to win a fourth title in six years under coach Eddie Jones. Over the past year, the English have adopted a pragmatic — some would say dull — approach, grinding out workmanlike victories that saw them capture the Six Nations in October and the inaugural Autumn Nations Cup in December.

It’s far from thrill-a-minute stuff, but Jones doesn’t seem to care as he looks to build a winning machine to take into the next Rugby World Cup in 2023. England is on an eight-test winning streak, after all.

Playing “effective rugby” is something Jones has repeatedly mentioned. If that means kicking a way to wins or using the physicality of his forward pack, then so be it. It might be a turnoff, though.

On the contrary, there’s France, with its young, fearless, new-look team that has been a breath of fresh air since the 2019 Rugby World Cup. Even its second string ran England close in the Autumn Nations Cup final.

Led by the exciting halfback combination of Antoine Dupont and Romain Ntamack and with runners like Gael Fickou and Virimi Vakatawa in midfield and Charles Ollivon in the back row, the French have been a joy to watch -- scoring the most points (138) and tied for most tries (17) in a 2020 championship in which they finished second on points difference. The defense has hardened, too, on Shaun Edwards' watch.

The thrilling wins over Wales and in particularly over Ireland (35-27) in Round 5 really got tongues wagging about the danger France could pose at a World Cup it hosts in 2023.

“We’re convinced they can take another step,” France assistant coach Raphael Ibanez said of his young players. "The France team has to go for titles. We can’t help but be ambitious, and that’s the message we’re getting across to the players.”

England and France — with their differing outlooks — start as the two most heavily backed teams and meet in Round 4. But what of the other pretenders?

Wales has played more expansively under new coach Wayne Pivac, but results have taken a sharp downward turn in the process with just three wins in 10 matches in the New Zealander’s tenure. It remains to be seen if the approach changes over the next couple of months for the 2019 Grand Slam champion.

As for Ireland, the post-Joe Schmidt era under Andy Farrell had a middling start with third places in the Six Nations and the Autumn Nations Cup. Defeats to England (twice) and France in 2020 indicate Ireland’s new standing in the northern hemisphere pecking order and they are the two teams who visit Dublin this winter.

Travel, of course, has been a major issue ahead of the Six Nations, with Europe still in the grip of the pandemic that forces stadiums to be empty of spectators.

French quarantine rules have been threatening to derail the championship, with visitors from Britain currently having to isolate for seven days on arrival and both Wales and Scotland scheduled for trips to Paris. Organizers believe those rules will be loosened, giving the Welsh and Scots special dispensation to go over provided they operate in a bubble and are regularly tested.

Games can go ahead in Italy — which hosts France, Ireland and Wales in Rome — because travellers are allowed to enter the country for professional reasons, while sports teams have exemptions to visit England, Ireland, Scotland and Wales to play matches.

Six Nations chief executive Ben Morel said that should any games be called off because of COVID-19 restrictions, there should be space in the calendar for them to be rescheduled. That differs from the Autumn Nations Cup, which finished with a final. When opponents had to cancel, teams were awarded 28-0 default wins.

If the rate of infection worsens in the countries, though, the championship could be extended — like last year.