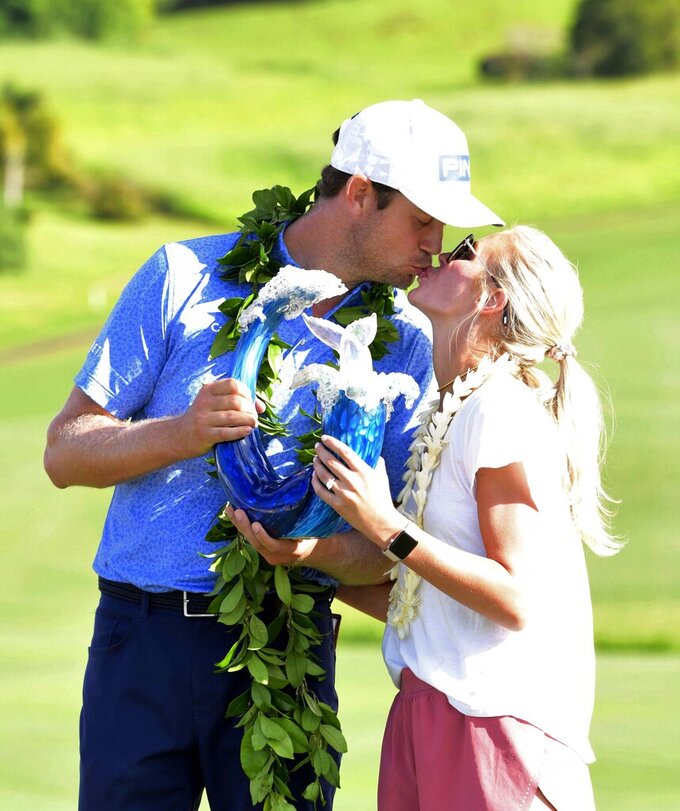 Harris English kisses his wife, Helen English, as he holds the champions trophy after the final round of the Tournament of Champions golf event, Sunday, Jan. 10, 2021, at Kapalua Plantation Course in Kapalua, Hawaii. (Matthew Thayer/The Maui News via AP) 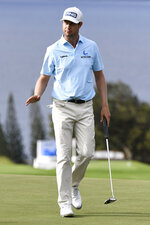 KAPALUA, Hawaii (AP) — Harris English once was considered a part of the future of American golf.

He won a Nationwide Tour event while he was still at Georgia. He had two PGA Tour titles when he was 24. His demeanor was ideal for golf, never too bothered my much and steady with his emotions.

That now seems like a long time, and it was. English had gone 192 starts on the PGA Tour over seven years since he last won, a drought that ended with a series of clutch shots that carried him to a playoff victory Sunday in the Sentry Tournament of Champions.

“It's awesome to get some validation,” English said.

In some respects, it represents a restart to a career that could take him places he hasn't been. The victory took him to a career-best No. 17 in the world, and he doesn't want to stop there.

“I'm still not satisfied with where I'm at in the game. There's still a lot more that I want to accomplish,” English said. “Hopefully, this is just the tip of the iceberg of me getting better and better, and hopefully having a chance to win a lot more tournaments.”

This was not a victory out of nowhere at Kapalua.

English began his turnaround after his lowest point in a two-year slump that cost him full status on the PGA Tour. His coach, Justin Parsons, told him he was on the right path and English proved it. Knowing he would have limited events, he did well enough in the fall of 2019 to build some momentum.

During the three months the PGA Tour was shut down because of the COVID-19 pandemic, he worked just as hard and played money games at Sea Island to keep sharp.

The confidence began to return. He kept getting into contention. And when the opportunity showed itself on Kapalua, he delivered.

English hit 8-iron into a strong wind to 2 feet for birdie on the 13th, part of a stretch in which he made four birdies in five holes to catch up to Joaquin Niemann. Trailing by one shot on the par-5 18th, he drilled a 3-iron from 268 yards off a downhill lie to 10 feet. He missed the eagle putt for the win, and then made birdie on the 18th in a playoff to win.

“It took a little while to kind of get rid of that scar tissue a little bit,” English said. “But I feel like I've been there for a while and I've been really close. Sunday is a day I look forward to, and I had a good feeling about today.”

English piled up 10 finishes in the top 10 after losing his full card, including fourth place in the U.S. Open. Now he is at No. 2 in the FedEx Cup as the year is starting.

English was playing at Bay Hill in 2014, fresh off his two-win year, when Graeme McDowell watched him from behind the 17th green. “This is a good one here,” McDowell said. “We're going to be seeing him in the Ryder Cup.”

English didn't quite finish the year strongly and ended 16th in the standing. No praise is greater than from peers, especially in a Ryder Cup year. Now, he has a chance to think about it again.

“My goal really this year is to play on the Ryder Cup team,” he said. "Obviously, winning was a goal, but I didn't want to force it. I know how hard it is to win out here on the PGA Tour and I knew that if I kept giving myself opportunities to pull it off that I could do it.

“I love being in that situation coming down the last nine holes and knowing what you have to do," English said. “And it was a lot of fun today. The shot I hit into 18 was awesome. I can really feed off that for years to come, and being able to do stuff like that when you're under the gun is so much fun to do.”

The key to his turnaround was to stop searching for perfect, and trying to be a player he wasn't. Instead of getting caught up in the skill set of Dustin Johnson or Rory McIlroy, he realized what he had was good enough.

The next stop is a short flight to Oahu for the Sony Open, where English can join Ernie Els (2003) and Justin Thomas (2017) as the only players to sweep the Hawaii Swing.