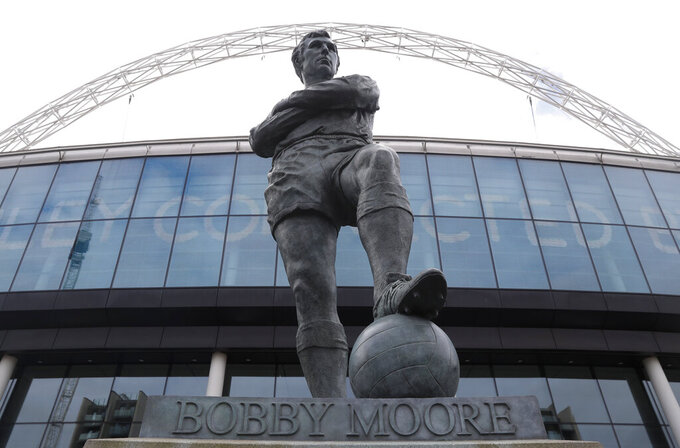 The statue of the late England player Bobby Moore outside Wembley Stadium in London, Tuesday, March 17, 2020. UEFA has formally proposed postponing the 2020 European Championship for one year because of the coronavirus outbreak. The Norwegian soccer association says the new tournament dates will be June 11 to July 11. (AP Photo/Alastair Grant)

English soccer faced warnings on Tuesday that losses caused by the coronavirus pandemic could exceed $1 billion and clubs could go out of business.

The financial alarm was sounded by the heads of the English Football Association and Premier League as well-paid players in the top flight resist calls to cut their salaries because they believe the move would only benefit wealthy owners.

In the lower leagues, third-tier promotion hopeful Sunderland and fourth-tier leader Crewe announced they would place staff, including players, on the government's job retention scheme.

Premier League chief executive Richard Masters wrote to the head of the parliamentary sports committee Julian Knight to defend the decision by some clubs in the world's richest soccer competition to have the government pay the salaries of furloughed non-playing staff.

“The furlough scheme announced by government is meant for the whole economy, including many enterprises which might be regarded as providing entertainment or otherwise dependent on elite talent,” Masters wrote. “Not only is our industry facing losses now, but to be realistic, we must also base our plans on full recovery being some distance away.

“Ultimately, the very heavy losses that we face will have to be dealt with or else clubs or other enterprises who depend on football for income will go out of business.”

The league was paused more than three weeks ago with Liverpool leading by 25 points with nine game games remaining and is indefinitely suspended.

Masters said the Premier League faces losses of at least 1 billion pounds ($1.2 billion) if the season cannot be completed. But Knight, a member of the House of Commons in the ruling Conservative Party, said Masters was “defending the indefensible" in justifying Premier League clubs "resorting to taking money from the government scheme.”

The Football Association said furloughing any of its staff is only a contingency plan, having already reduced salaries, including England manager Gareth Southgate taking a 30% cut.

“Football faces economic challenges beyond the wildest imagination of those who run it," Clarke told the FA Council. “The pandemic will be followed by its economic consequences and all business sectors will suffer. We face the danger of losing clubs and leagues as finances collapse.

"Many communities could lose the clubs at their heart with little chance of resurrection. In the face of this unprecedented adversity, all the stakeholders within the game from players, fans, clubs, owners and administrators need to step up and share the pain to keep the game alive.”

Under the scheme implemented to help businesses survive the national lockdown, staff can be put on furlough and receive 80% of their salaries from the government, up to a maximum of 2,500 pounds ($3,000) a month.

Liverpool on Monday reversed a decision to apply its furloughed non-playing staff for the scheme and apologized to fans after facing public backlash.

Manchester United manager Ole Gunnar Solskjaer defended players who have been criticized by the government for not reducing their pay as clubs deal with the lack of revenue with sport on hold.

“It’s unfair to call on any individual or footballers as a group because I already know players do a great amount of work in the community, and players are doing a lot to help in this situation,” Solskjaer said.