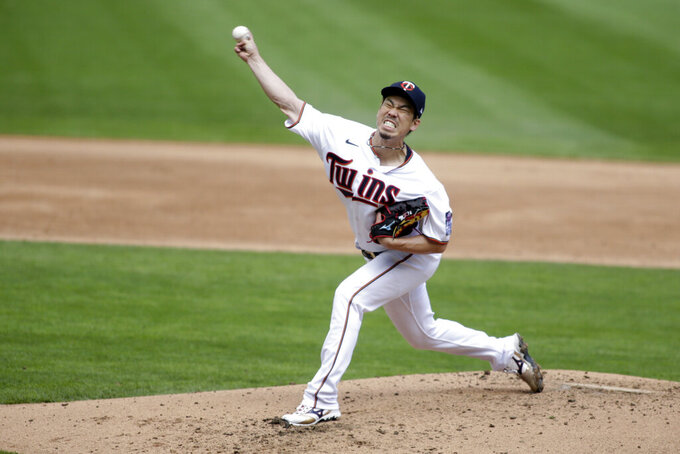 Christian Arroyo, Alex Verdugo and Xander Bogaerts each had two hits for Boston, which is on its longest win streak since 2018. The Red Sox, who finished last in the AL East in 2020, are the first team since the 1991 Seattle Mariners to lose at least three games to start the season and follow that by winning at least seven straight, according to the Elias Sports Bureau.

“For me, it’s the pitching,” Eovaldi said. “I like our team a lot. I like where we’re at. I feel like at any point in the ballgame, we’re going to be able to take the lead, put up runs and keep us there.”

Eovaldi (2-1) gave up two runs on five hits. He has allowed four runs over 17 1/3 innings in three starts this season.

Matt Barnes finished with his second save after allowing a leadoff walk to Jake Cave. Cave stole second base and Barnes stranded him when Verdugo caught Luis Arraez’s sinking liner in left field.

Kenta Maeda (1-1) was undone by Minnesota’s defense in the second inning, including his own throwing error that allowed a run to score. He pitched 4 1/3 innings and gave up three runs — two earned — on seven hits and two walks. He struck out five.

“It was mainly my delivery,” Maeda said. “I haven’t had too many opportunities to pitch in the cold weather. But that’s something I’ve got to get used to, being a Twin, being in Minnesota, things like that. And then last year, we started here in June with the summer camp, so this is the first time I’m experiencing the cold here.”

The first-pitch temperature was 38 degrees. The Twins have lost four straight.

Arroyo capped off Boston’s three-run second with an RBI single, but the Red Sox stranded a pair of runners against Maeda. Boston left 12 runners on base in the seven-inning game and was 3 for 18 with runners in scoring position.

“It wasn’t a perfect game for us,” Red Sox manager Alex Cora said. “We’re good, but we have to keep playing the game. We had a lot of runners on base we couldn’t cash in and it came down to a great play by Alex. We’ll take it, of course. But we need to keep working and keep getting better.”

The doubleheader was scheduled after Monday’s game was postponed following the fatal police shooting of a Black man in a nearby suburb.

Red Sox: RHP Bryan Mata, one of the team’s top pitching prospects, underwent Tommy John surgery on his right elbow on Tuesday. The procedure was performed by Dr. Neal ElAttrache in California.

Twins: SS Andrelton Simmons tested positive for the coronavirus and was placed on the COVID-19 injured list prior to the game. Twins president of baseball operations Derek Falvey said Simmons was experiencing “very mild” symptoms and resting at home. The team selected the contract of JT Riddle from its alternate training site. … Manager Rocco Baldelli said he expected 3B Josh Donaldson, out since the season’s first game with a right hamstring strain, to be activated and play in the second game of the doubleheader. … DH Nelson Cruz returned to the lineup after missing Tuesday’s game with a non-COVID-19-related illness.