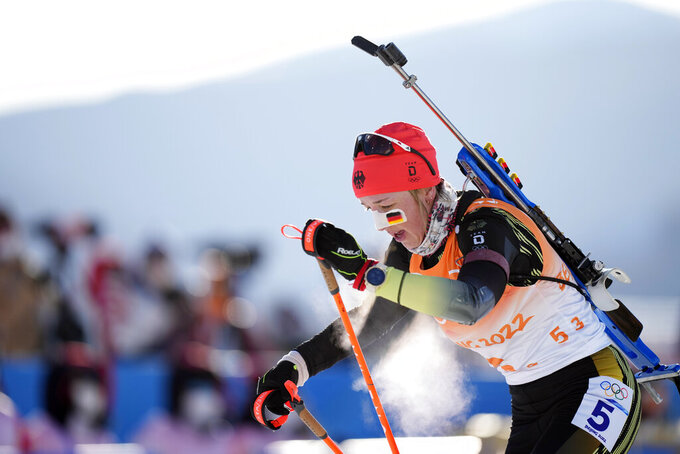 ZHANGJIAKOU, China (AP) — The Frenchman fared better in the first week. The Norwegian nailed it in the second.

The biathlon competition at this year’s Olympics, held amid whipping wind and bone-chilling temperatures in the mountains far outside Beijing, produced an epic battle between two of the sport’s best.

“Quentin dominated the first week, Johannes the second,” said Martin Fourcade, a five-time Olympic biathlon champion from France. “These are two big athletes and Quentin deserves to be among them. He has worked hard to come here as a leader and he lived up to that status.”

The conditions made it difficult for everyone in a sport that combines cross-country skiing and shooting. The wind made even the best marksmen struggle to hit targets in some races.

The Boe family will head home with two suitcases full of medals. Johannes Thingnes Boe won four gold and one bronze while Tarjei Boe won two gold, one silver and one bronze — with some of those overlapping in team events.

Roeiseland won three gold and two bronze. One of her gold medals came in the mixed team relay, which also included the Boe brothers.

“The best athletes dominated,” Fourcade said. “There were a few surprises, but we also saw big champions show their top performances.”

Fillon Maillet’s epic battles with Johannes Thingnes Boe ebbed and flowed, with each taking the lead in alternating races. Boe out-sprinted Fillon Maillet in the mixed relay, but the Frenchman took gold in the next race — the individual — while Boe settled for bronze.

Their battle continued until Friday’s final race. Boe won that, and Fillon Maillet finished just off the podium, only 13.1 seconds from that coveted sixth metal.

“It’s biathlon. What an extraordinary fortnight. Big desires for crystal now,” Fillon Maillet wrote on Instagram, referring to the end of the Olympics and his continued pursuit of the World Cup title.

Roeiseland also leads the World Cup standings, but wind played a part in some of her less-then-stellar results. The same was true for teammate Tiril Eckhoff, who won the overall title last season but missed five targets in the Olympic relay and skied two penalty loops, taking Norway out of contention.

Also missing a goal were the Americans, who have yet to win an Olympic medal in biathlon.

The country’s last hope was Deedra Irwin, who in her Olympic debut qualified for Friday’s mass start race. She missed four targets in her prone bouts, but did better in the standing, hitting all but two. She finished 23rd.

“I hope that if I don’t get that Olympic medal, that someone else I inspired will and I think that’s the same for all the people before me. We just want to inspire people.”

The Boe brothers weren’t the only gold-medal winning siblings in biathlon at the Beijing Games.

The Oeberg sisters from Sweden, Elvira and Hanna, both won gold as teammates in a relay race. Elvira added two silver medals from individual events.

“I was really proud of her, a really proud big sister, and happy for her after her individual silvers,” Hanna Oeberg said after the relay victory. “But doing this together now means a lot. It’s huge.”

Tarjei Boe is the older of the Boe brothers. He was competing in his fourth Olympics but had only won one medal previously, back at the 2010 Vancouver Games in the relay alongside biathlon great Ole Einar Bjørndalen.

He said the Beijing Games would be his last, but he’s expecting more form his little brother.

“I saw it quite early, 10 years ago or maybe earlier, that he would be in some years unbeatable,” Tarjei Boe said. “So my goal was to win as much as I could before he grew up, and I did — the start of my career was quite strong.

“Now he is by far the best athlete in the world. At this altitude on these tracks, it’s like a glove for his hand.”