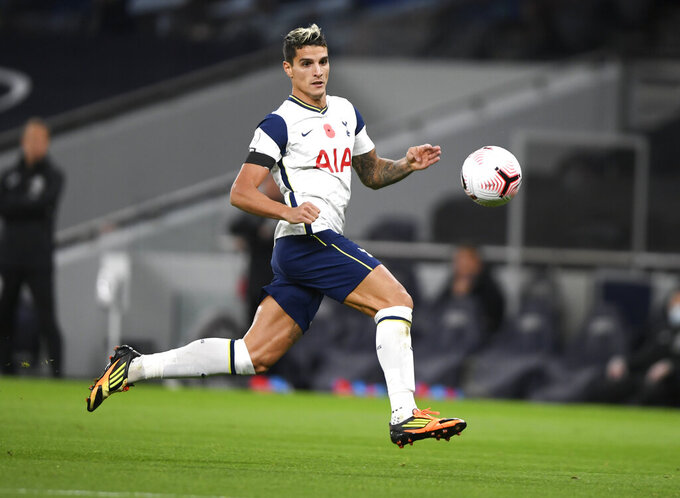 FILE - In this Sunday, Nov. 1, 2020 file photo, Tottenham's Erik Lamela watches the ball during their English Premier League soccer match against Brighton & Hove Albion at Tottenham Hotspur Stadium, London. Four Premier League players from Tottenham and West Ham have broken English lockdown laws by gathering inside a house together over Christmas just after the government had tightened coronavirus restrictions in response to a new transmissible variant. Tottenham and West Ham on Saturday, Jan. 2, 2021 condemned the inter-household mixing by their players, Tottenham trio Erik Lamela, Sergio Reguilon and Giovani Lo Celso and West Ham’s Manuel Lanzini and other people. (Mike Hewitt/Pool via AP, file)

LONDON (AP) — Just as the English Premier League grapples with a spike in coronavirus cases wiping out matches, an outlawed gathering involving four players from Tottenham and West Ham for a Christmas party has been exposed.

It wasn't just a breach of lockdown regulations, and embarrassing for their clubs and league officials who have persuaded the government to allow games to continue as coronavirus infections surge to daily records in Britain.

There was a risk of contracting COVID-19 when Tottenham trio Erik Lamela, Sergio Reguilon and Giovani Lo Celso, and West Ham’s Manuel Lanzini mingled indoors with family and friends. That potentially exposed teams and opponents to the coronavirus.

The image of the party — showing the group posing without any social distancing — was discovered on Instagram and published Saturday just as Tottenham was preparing to play Leeds.

“We are extremely disappointed and strongly condemn this image showing some of our players with family and friends together at Christmas particularly as we know the sacrifices everybody around the country made to stay safe over the festive period,” Tottenham said in a statement.

Tottenham's last game against Fulham was postponed on Wednesday due a coronavirus outbreak at its London rival. Fulham's game against Burnley on Sunday became the Premier League's third fixture this week to be called off.

Fulham striker Aleksandar Mitrovic was also seen in a social media video and appeared to be with fellow Serbian Luka Milivojevic, the Crystal Palace captain, at a prohibited indoor New Year’s Eve party that has been condemned by both clubs.

The restrictions imposed in the London area in response to a new transmissible variant of the virus prevent people from visiting another house, apart from someone in a support bubble.

Lamela, Reguilon and Lo Celso did not feature for Tottenham against Leeds, although Reguilon was an unused substitute.

“The rules are clear, there are no exceptions, and we regularly remind all our players and staff about the latest protocols and their responsibilities to adhere and set an example,” Tottenham said. “The matter will be dealt with internally.”

Lamela, one of Tottenham’s longest-serving players, said he now understands the seriousness of his indiscretion.

“I am truly thankful to everyone working hard to keep us safe and I feel ashamed knowing I’ve let people down,” Lamela said.

“I understand the great sacrifices people are making to keep themselves and loved ones safe and the frustration you have expressed towards me is justified," he said.

Reguilon was the only one of the players to issue no apology on social media on Saturday. Tottenham manager Jose Mourinho was particularly annoyed with Reguilon, having bought the Spanish defender a Portuguese suckling pig as a present.

“I gave (it to) him because I was told he was going to spend Christmas on his own,” Mourinho said. “I had this thought about him. He was not alone as you could see and we the club of course feel disappointed because we give the players all the education, all the conditions. Of course we’re not happy. It was a negative surprise for us.”

West Ham expressed disappointment with Lanzini and said he had been “strongly reminded of his responsibilities” to following the protocols.

“I want to apologise for a bad mistake I made over Christmas and I take full responsibility for my actions,” Lanzini said.

The controversy comes amid questions about whether the Premier League should suspend the competition like last season during the pandemic. Britain on Saturday reported a daily record of more than 57,700 infections and another 445 deaths taking the national toll to 74,570.

Additional coronavirus infections were detected after further testing at Fulham, which led to the club asking the Premier League not to play Burnley on Sunday. The request was granted based on medical advice and the “exceptional circumstances of the ongoing outbreak,” the league said.