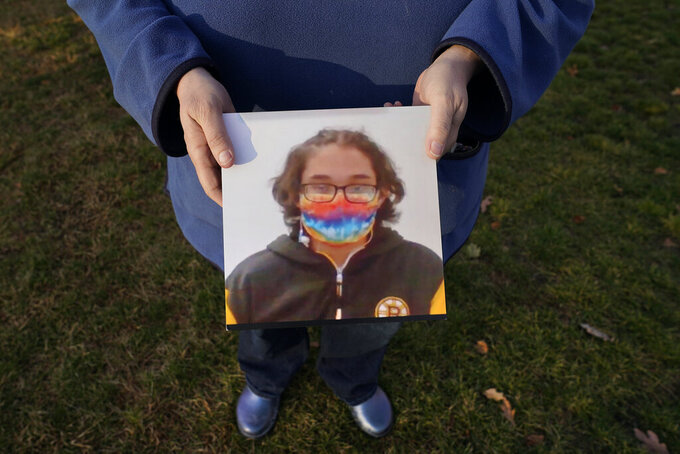 Laura Dilts, of Barre, Mass., holds a photograph of her 16-year-old son outside the Worcester Recovery Center, where he is a resident patient receiving assistance for his mental health, Monday, Nov. 23, 2020, in Worcester, Mass. The coronavirus pandemic has led to rising emergency room visits and longer waits for U.S. children and teens facing mental health issues. (AP Photo/Charles Krupa)

When children and teens are overwhelmed with anxiety, depression or thoughts of self-harm, they often wait days in emergency rooms because there aren’t enough psychiatric beds.

The problem has only grown worse during the pandemic, reports from parents and professionals suggest.

With schools closed, routines disrupted and parents anxious over lost income or uncertain futures, children are shouldering new burdens many are unequipped to bear.

And with surging numbers of hospitalized COVID-19 patients, bed space is even scarcer.

By early fall, many Massachusetts ERs were seeing about four times more children and teens in psychiatric crisis weekly than usual, said Ralph Buonopane, a mental health program director at Franciscan Hospital for Children in Boston.

”I’ve been director of this program for 21 years and worked in child psychiatric services since the 1980s and it is very much unprecedented,” Buonopane said. His hospital receives ER transfers from around the state.

While ER visits for many health reasons other than COVID-19 declined early in the pandemic as people avoided hospitals, the share that were for kids' mental health-related visits climbed steadily from mid-April through October, according to a recent federal Centers for Disease Control and Prevention report. Of the kids who showed up, more were for mental health than in the same period last year, although that might reflect that others stayed away, the authors cautioned.

Claire Brennan Tillberg's 11-year-old daughter was one of those kids who sought care. The Massachusetts girl has autism, depression and anxiety, and has been hospitalized twice in recent months after revealing that she'd had suicidal thoughts. The second time, in September, she waited a week in an ER before being transferred to a different hospital. The first time, in July, the wait was four days.

She'd been hospitalized before, but Tillberg said things worsened when the pandemic hit and her new school and therapy sessions went online. Suddenly the structure and rituals that many children with autism thrive on were gone.

“She’d never met the teacher, never met the kids,” said Tillberg, a psychotherapist. “She felt more isolated, more and more like things aren’t getting better. Without the distraction of getting up and going to school or to camp ... sitting at home with her own thoughts all day with a computer has allowed that to worsen.’’

Studies and surveys in Asia, Australia, the U.S., Canada, China and Europe have shown overall worsening mental health in children and teens since the pandemic began. In a World Health Organization survey of 130 countries published in October, more than 60% reported disruptions to mental health services for vulnerable people including children and teens.

Emergency rooms are often the first place kids facing a mental health breakdown go for help. Some are stabilized there and sent home. Some need inpatient care but many hospitals don't offer psychiatric treatment for kids and transfer these children elsewhere.

Some treatment centers won’t take kids without proof they don’t have COVID-19, ’’which is hard because you can’t always find a rapid test,” said Ellie Rounds Bloom. Her 12-year-old son has “significant mental health issues” including trauma, and has experienced several crises since the pandemic began. The Boston-area boy has been hospitalized since October, after spending 17 days in ER.

Many mental health advocates consider these waits unacceptable. For parents and their kids, they are that, and more.

“There have been moments of frustration and moments of sheer pulling your hair out,” Rounds Bloom said.

State health insurance covers her son's treatment but not all providers accept it. Deficiencies in the U.S. health care system can leave families feeling helpless, she said.

“You can’t give up, because it’s your kid," Rounds Bloom said.

There are no national studies on kids’ ER waits for mental health treatment, a practice called “boarding,” according to a recent review published in the journal Pediatrics. The review included small studies showing that between 23% and almost 60% of U.S. kids who need inpatient care have to wait in ERs to receive it. They are kept stable but often receive little or no mental health care during those waits.

One in 6 U.S. children have a diagnosed mental, behavioral or developmental disorder, according to the CDC. Data show problems like depression become more prevalent in teen years; 1 in 13 high school students have attempted suicide and at least half of kids with mental illness don’t get treatment.

Shortages of psychiatrists in some areas and hospital closures have worsened the problem and contributed to rising ER mental health visits, the Pediatrics review said.

The number of U.S. children's mental health hospitals dropped to 38 from 50 between 2008 and 2018. The number of U.S. hospitals reporting that they offer any inpatient psychiatric services to adults or children dropped by almost 200 from 2008 to 2018, when the tally was 1,487, American Hospital Association data show.

Children who need to be admitted for complex mental issues and behavior outbursts often have the longest ER waits. Kids like Laura Dilts’ 16-year-old son, who is chronically suicidal, has mild autism, anxiety, severe depression and attention deficit disorder.

Early this year, before the pandemic hit, he waited for a hospital bed twice, once for a week, the second time for over two weeks. He had been living at an intensive residential treatment center and has been back there since April.

Dilts worries about what will happen if he has another crisis.

At the 66-bed Clarity Child Guidance Center in San Antonio, demand has been surging, says CEO Jessica Knudsen. About half their patients are Hispanic and 60% receive some form of public health insurance.

Some nights, there have been five or six kids sleeping in an observation area waiting for beds, she said.

’’I feel OK once they get to us,” even if in the observation room, she said. “They’re getting eyes on them by a mental health professional.”