Erdogan under fire for packed congress despite virus surge 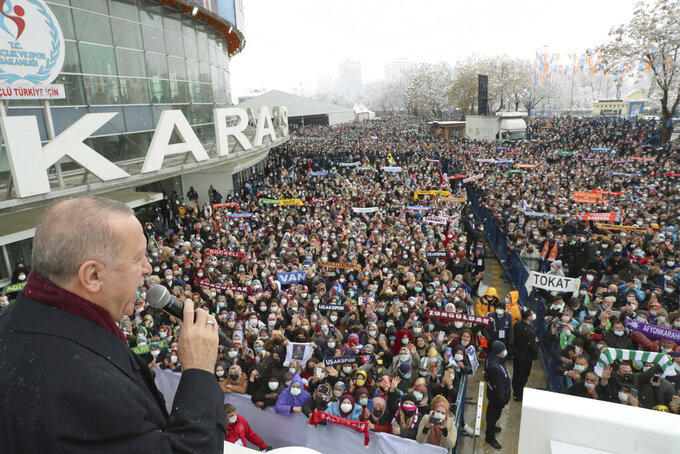 Turkey's President Recep Tayyip Erdogan delivers a speech to gathered supporters outside a packed sports hall where he also attended his ruling party's congress in Ankara, Turkey, Wednesday, March 24, 2021. Erdogan has come in the firing line for holding the rally inside the closed venue amid a new surge in COVID-19 cases. Thousands of party supporters filled the stands of the 10,400-capacity sports hall in the capital, in disregard of the government's own social distancing rules to fight the coronavirus pandemic. (Turkish Presidency via AP, Pool)

Erdogan spoke for nearly two hours at the event, presenting his vision for when the country marks the centenary of the Turkish Republic in 2023, when the country is also scheduled to hold presidential and parliamentary elections. He said he cut remarks short in order not to expose congress participants to the virus.

Murat Emir, a physician and lawmaker from Turkey’s main opposition party, described the scenes from the party congress as “shameful,” writing on Twitter that the event showed disregard for “the health workers who work day and night in the battle against the pandemic.”

Former Ankara mayor Melih Gokcek, a member of Erdogan's Justice and Development Party, maintained that delegates were tested for the coronavirus before attending the congress.

Erdogan has been criticized for holding similarly crowded local party congresses across the country in past weeks despite the pandemic. During one such event, he boasted about the size of the crowd.

Turkey reported close to 30,000 new COVID-19 infections on Wednesday, weeks after the government eased restrictions in dozens of provinces under a so-called “controlled normalization” program. The country also reported 146 deaths in the past 24 hours.

On March 1, the government divided Turkey’s provinces into four risk categories and allowed restaurants and cafes to reopen in low, medium and high-risk areas. Weekend lockdowns were also eased in those provinces, although nighttime curfews introduced in late November remain in place across Turkey.