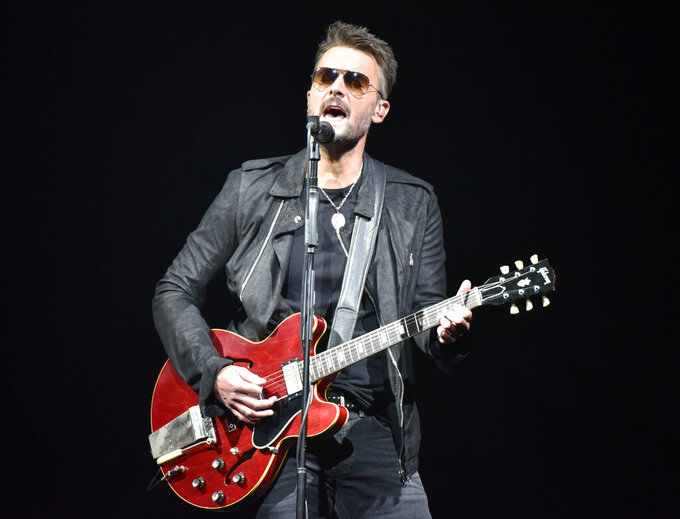 FILE - In this March 23, 2019 file photo, Eric Church performs during his Double Down tour in Rosemont, Ill. The country singer sent a message to fans in a new video that offers his belief in American resolve to overcome the pandemic. He is teasing new music, including a song called “Through My Ray Bans” from a forthcoming album.  (Photo by Rob Grabowski/Invision/AP, File)

NASHVILLE, Tenn. (AP) — Country star Eric Church doesn’t know when concerts might resume in the United States after the spread of the coronavirus, but he wants people to feel safe when they return to hear live music.

The singer known for his often-worn sunglasses sent a message to fans over the weekend in a new video and tease of a new song that offers his belief in the American resolve to overcome the pandemic.

With echoes of the 2017 mass shooting in Las Vegas in his mind, Church recorded the song “Through My Ray Bans," co-written with Luke Laird and Barry Dean, in February about seeing people standing shoulder to shoulder, “like an army of Friday night soldiers.”

“It could be sports. It could be music. It could be church. It’s that fellowship that we have that makes life worth living,” Church said in an interview with The Associated Press.

The virus reminded him of the fear that many people, even himself, felt after the Route 91 Harvest music festival, where Church had played the night before the shooting.

“The thing that shook me about Vegas was that was my safe place,” Church said. “As messed up as the world is, I never in a million years thought that could be a danger area.”

Now as tours and festivals are canceled or rescheduled or postponed indefinitely, Church wants to remind fans that concerts and gatherings will resume eventually, but urged people in his new video not to give into fear and panic.

“When people come back, they have to feel that it’s OK to be there, that they can experience it the way they want to experience it,” Church said. “They should be able to go up and throw their arms around the person next to them. They should not be scared about being three feet away and not six.”

But Church said he thinks major festivals and touring could be delayed as far out as next year.

“For me, I think it’s summer or fall of ’21. I am going on the promise of a vaccine. I’m going on the possibility of a therapeutic that could change the game,” Church said.

The virus has also upended a lot of plans for album releases this year, including his own. Prior to the virus spread, Church voluntarily secluded himself in a makeshift studio in the North Carolina mountains to record for a full month with several writers and his band. He wrote and recorded a song each day, ending up with about 28 songs. “It’s always intrigued me, a kind of old rock ‘n’ roll model,” Church said. “You write the song in the studio. You record the song the same day.”

Even though he hasn’t released any songs for download or streaming or to radio yet, he’s been living with them a lot longer than he normally does before the public or even the people at his label or management has heard them.

“I don’t know if this is an album, if it’s two albums, if it’s three,” he said. “I feel confident enough with the material that people will get to hear all of these songs at some point.”

Meanwhile, Church said he is looking to history as a guide for what’s to come after the pandemic.

“I think about the 1918 pandemic and there’s a reason the Roaring Twenties happened,” said Church. “When people roared, they roared. I believe that will happen again.”