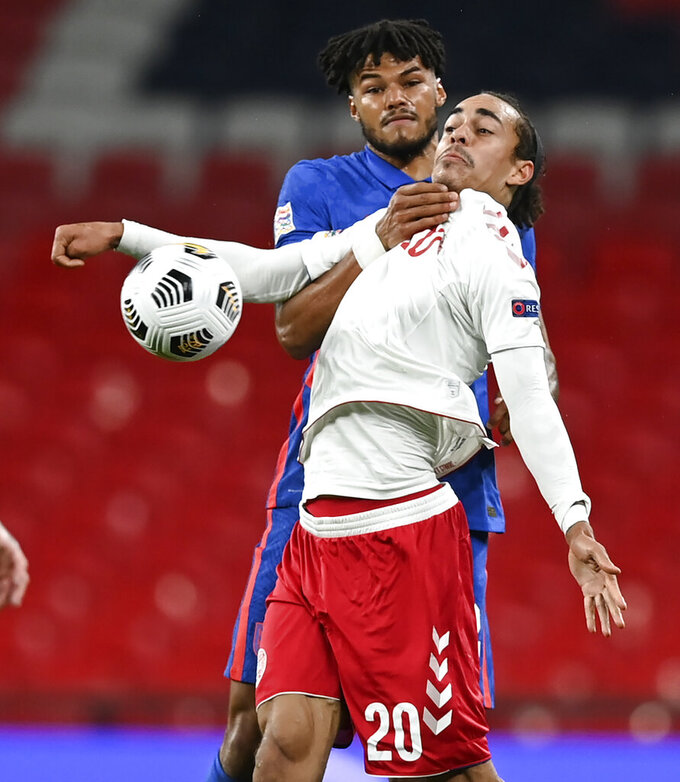 LONDON (AP) — Christian Eriksen marked his 100th Denmark appearance by scoring the penalty that clinched a 1-0 victory over England in the UEFA Nations League on Wednesday.

England had already been reduced to 10 men — after Harry Maguire was sent off — by the time a disputed penalty was awarded for Kyle Walker's challenge on Thomas Delaney in a rare top-level game not using VAR.

Eriksen converted the penalty for his 34th international goal in the 35th minute at Wembley, where the Inter Milan playmaker became accustomed to scoring in his Premier League career when it was Tottenham's temporary home.

Unlike then, the stadium was empty as fans are still prevented from attending games in England due to a resurgence in coronavirus cases.

Reece James’ first England start ended with him being sent off after the final whistle for dissent toward the referee.

The result leaves Group 2 wide open heading into the final two rounds of matches in November. England dropped from first into third place behind Denmark and Belgium, which took the lead with a 2-1 victory over Iceland.

But it took quick reflexes from goalkeeper Kasper Schmeichel to palm away Mason Mount's header and tip over a free kick from Reece James to prevent England leveling in the second half.

It had started to go wrong for England and Maguire after five minutes. The defender earned his first booking for a sliding tackle on Yussuf Poulsen, but that didn't curb his recklessness.

When his overextended left foot caught Kasper Dolberg in the 31st minute, the referee had no option but to show Maguire a second yellow card.

It's the latest setback for Maguire, who became the world's most expensive defender when he signed for Manchester United last year. He was withdrawn by Southgate for last month's three England games after he was convicted in Greece of assaulting a police officer and attempted bribery while on holiday in August. Hanging over Maguire is an appeal process against the conviction and suspended 21-month sentence.