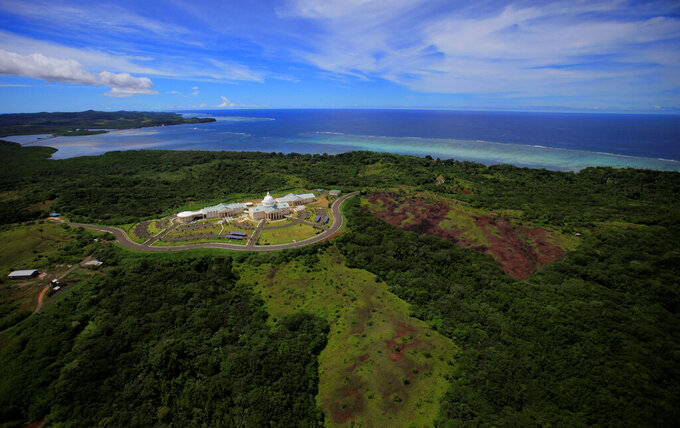 FILE - In this June 20, 2009 file photo, the Palau Capital building is seen in Melekeok, Palau. Defense Secretary Mark Esper plans to fly nearly halfway around the world this week to tiny Palau, which no Pentagon chief has ever visited. (AP Photo/Itsuo Inouye, File)

WASHINGTON (AP) — No nation is too small or too distant from Washington, it seems, to be excluded from the Trump administration’s campaign to counter China’s efforts to supplant America as the dominant Pacific power.

Evidence of this is Defense Secretary Mark Esper’s decision to fly nearly halfway around the world partly so he can spend several hours in Palau, a Pacific archipelago of barely 20,000 people southeast of the Philippines.

There is no suggestion of a direct Chinese military threat to Palau. Instead the island nation is an example of the sometimes obscure battleground on which the United States and China are pursuing a “great power” competition for global influence in an era of a more inward-looking Washington and an increasingly assertive and ambitious China. The power struggle is intensifying on multiple fronts and is seen by some as an emerging “cold war” akin to the mostly non-shooting conflict that played out between the United States and the Soviet Union until the collapse of Soviet communism in 1991.

In defiance of Beijing, tiny pro-American Palau is one of only 15 states with official diplomatic relations with Taiwan, the self-governing island that China claims as its own territory.

“We are concerned about China continuing to try to flip countries that recognize Taiwan today to establish diplomatic relations with China instead,” said Heino Klinck, the deputy assistant secretary of defense for East Asia. “We find that destabilizing, quite frankly.” The United States made that very switch itself when it recognized Beijing as the sole legal government of China in 1979, although Washington maintains unofficial relations with Taiwan and sells arms to Taiwan under the Taiwan Relations Act.

More broadly, Klinck said in an interview, Esper wants to reinforce the U.S. commitment to a long-term relationship with Palau.

“A little country, maybe, but they punch above their weight when it comes to enlistment rates in the U.S. military,” Klinck said, adding that six Palauans have been killed in a U.S. uniform in Iraq and Afghanistan. Under a 1994 Compact of Free Association, Palauans are eligible to serve in the U.S. military.

The list of the Trump administration’s complaints about China is long and extends far beyond Palau. Washington derides China's militarization of the South China Sea, regards with suspicion its expanding nuclear arsenal, and has retaliated this year for its alleged use of diplomatic facilities in the United States to coordinate theft of economic and scientific secrets. The coronavirus pandemic and commercial trade, too, are sore spots.

For its part, China sees U.S. policy as designed to limit its rise as an economic and military power.

American and Chinese warships often jockey for position in the South China Sea. In July, the Trump administration took the diplomatic tussle to a new level by declaring illegitimate nearly all of China’s maritime claims in the South China Sea, a broad declaration that favors the Philippines, Vietnam, Taiwan and Brunei.

On Thursday, shortly before Esper was due to depart Hawaii for Palau, the Pentagon issued a public statement of complaint about Chinese military exercises, including a test-firing of ballistic missiles, this week around the Paracel Islands in the South China Sea. It called the moves destabilizing and an attempt to “assert unlawful maritime claims” and to disadvantage China's neighbors.

Also, a U.S. Navy destroyer, the USS Mustin, patroled in international waters near the Paracels on Thursday in a move designed to challenge China's encroachment into contested waters there.

Esper is making his first visit to the Asia-Pacific region since the coronavirus pandemic forced him to limit international travel in March. Esper's visit illustrates an important reason for the Pentagon's interest in nurturing ties: Palau sits on a North Pacific pathway that links U.S. forces based in Hawaii and Guam to potential hotspots on the Asian continent. Esper also will be visiting Guam.

No U.S. defense secretary has ever visited Palau, according to the Pentagon historian's office.

In a study last year, the RAND Corp. said the Freely Associated States, of which Palau is a part along with Micronesia and the Marshall Islands, are “crucial to the promotion” of the administration’s Asia-Pacific strategy. It said their position in the Pacific is “tantamount to a power-projection superhighway running through the heart of the North Pacific into Asia.”

The U.S. military has a legacy, but no troops, in Palau. Marines suffered heavy casualties in attacking Japanese positions on the southern Palau island of Peleliu in September 1944. The United States administered Palau under U.N. auspices after World War II and is responsible for its defense until 2044 under the Compact of Free Association.

Palau is no stranger to U.S.-Chinese tensions. In 2009, several Chinese ethnic Uighur men who had been swept up in Afghanistan as terrorist suspects and imprisoned at Guantanamo Bay were released and sent to Palau. Their resettlement there reportedly angered Beijing, which wanted them repatriated.

Esper planned to lay a wreath at the site off Palau's coast where a U.S. Navy Avenger torpedo bomber crashed on July 27, 1944. The three Americans aboard perished; they were from the same carrier-based Navy torpedo squadron, VT-51, as Ensign George H.W. Bush, the future president.

Randall Schriver, who until eight months ago was the Pentagon’s top Asia policy official, says Palau is a logical stop for Esper, given that China is the administration’s No. 1 foreign and defense policy concern.

“It reflects the broadening competition” and Beijing’s efforts to exert more influence in the North Pacific islands, Schriver said, as well as the tug of history that binds the United States to wartime partners.

Although Palau is well off the beaten path of a Pentagon chief's normal itinerary, Esper's visit is a gesture of support for a small country feeling the strain of what Washington calls Beijing's “predatory economics.”

In 2018, Bejing effectively banned Chinese tour groups from visiting Palau, which had relied on China for a large portion of its tourism. The move was seen in Palau as a move to pressure its leaders to switch diplomatic allegiance from Taiwan to Beijing.

In a speech in February spelling out the U.S. approach to China, Esper highlighted his concern for smaller countries.

“Communist China is exerting financial and political pressure, publicly and privately, on many Indo-Pacific and European nations — large and small — while pursuing new strategic relationships worldwide,” he said. “In fact, the smaller the country, the heavier the hand of Beijing.”

In the Pacific, Esper says, China aims by 2049 — the 100th anniversary of its communist revolution — to be the dominant military power in Asia.