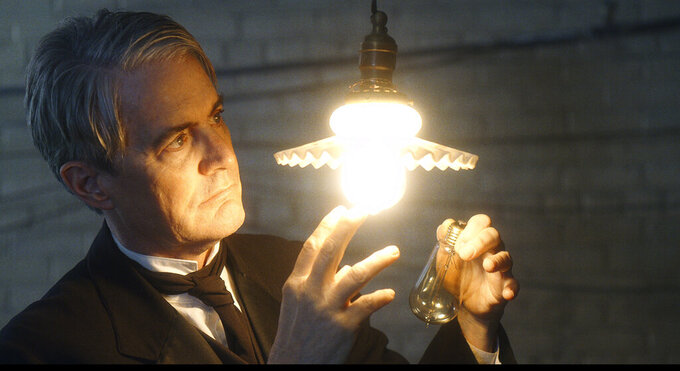 This image released by IFC Films shows Kyle MacLachlan in a scene from "Tesla." (IFC Films via AP)

NEW YORK (AP) — Ethan Hawke has portrayed several real people in recent years, including musician Chet Baker and abolitionist John Brown, but his new role as pioneering inventor and engineer Nikola Tesla presented the challenge of playing a genius. In the new independent film “Tesla” by writer-director Michael Almereyda, Hawke shines light on the Serbian immigrant’s many theories and inventions.

Hawke plays Tesla as an outsider with a brilliant mind who has visions of the future, including wireless communications systems. Kyle MacLachlan plays charismatic Thomas Edison and Almereyda imagines the two as competitors chasing investors and ideas.

This is the third time the actors have worked together and in a recent interview with The Associated Press, it was clear they have an easy rapport, full of mutual respect and teasing.

AP: How did you approach playing a genius?

MacLachlan: The challenge, I think, is finding the person, the human, the frailties, you know? As you go through these guys…the thing that I think that I respond to most — I’m thinking of (director) David Lynch now — is the absolute commitment to the artistic process, particularly in David’s case. If I’m working on a character or I’ve got a role to do, a job, you’re very committed. But during the rest of the time, I’m off just kind of messing around, I don’t know, making dinner. You know what? Edison’s not making dinner somewhere! You know what I mean? He’s constantly thinking. Almost, I wonder if he’s at the mercy of this mind and would he like to get off the treadmill? I don’t know.

Hawke: It’s a little bit of torture. A person like Tesla and a person like Edison had a lot of it... When you think about creating something that had never existed. Creating the Internet. Creating electricity. Conceiving of a way that people could communicate without seeing one another. And knowing that’s possible.... You’re seeing a lightning storm and wondering “How does that work?” My brain doesn’t do that. I just accept it. So I kind of, I was just in awe of these two men.

AP: The film is a period piece and has a physically dark, moody feel but also uses some modern touches, like breaking the fourth wall. How did you contribute to that?

MacLachlan: That’s the responsibility of the director. He takes care of that. We take care of what’s happening between us in the scene and we build our arsenal of whatever it is that we need as the character. And then we just play. I mean, it’s one of the beauties of working with Ethan that it’s like wherever we go, wherever Ethan goes, wherever I go, we’re so connected and so much great stuff I think comes out of that just by allowing it to happen.

Hawke: Kyle and I have a scene in which Michael wanted to do this thing where he played with “What’s reality?” So he wanted to imagine that we shove ice cream in each other’s face. Right? Because you kind of know that probably didn’t happen. And so... it kind of pops, because your brain goes, “Wait, that never happened.” So then you realize none of this really happened because they’re obviously acting, we’re interpreting their actions. And it does something kind of beautiful to your brain. And I remember Kyle and I saying after that scene, whatever that is, is what’s special about what Michael sees about the world.

AP: What’s been the silver lining of the pandemic for you?

Hawke: I don’t think I’ve ever had five months of dinners at home. I’m a very restless person and I like to move and there’s been aspects of this that have been powerfully good for my soul. To not get my self-esteem from my work, but get it from my behavior with my family. You know, that’s something that’s never been asked of me. I lost work, but I’m getting time with my wife and my kids and I’m getting time with myself.

MacLachlan: The amount of time that I’m spending at home with my family right now. My son is 12. It’s a great age. And we’re together all day, every day. And we haven’t gotten sick of each other, which is a good sign!