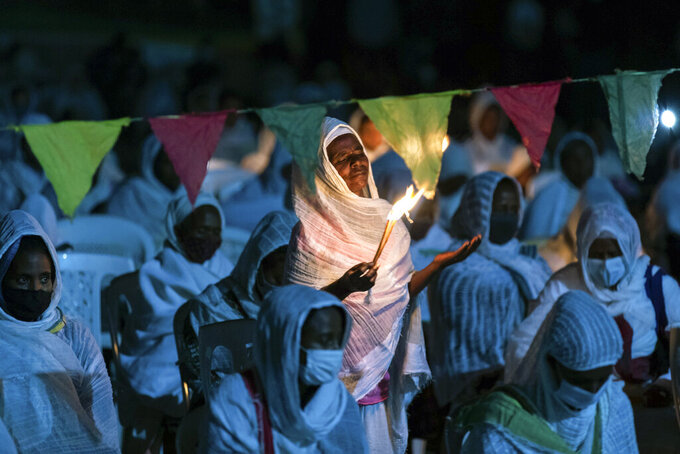 Ethiopian Orthodox Christians light candles and pray for peace during a church service at the Medhane Alem Cathedral in the Bole Medhanealem area of the capital Addis Ababa, Ethiopia Thursday, Nov. 5, 2020. Ethiopia's powerful Tigray region asserts that fighter jets have bombed locations around its capital, Mekele, aiming to force the region "into submission," while Ethiopia's army says it has been forced into an "unexpected and aimless war." (AP Photo/Mulugeta Ayene)

ADDIS ABABA, Ethiopia (AP) — Ethiopia’s army said Thursday the country has been forced into an “unexpected and aimless war” with its well-armed Tigray region, while Tigray asserted that fighter jets had bombed areas around its capital — a marked escalation with little sign of the two sides willing to talk to calm the crisis.

Ethiopia’s army deputy chief said military forces are being sent to the fighting in Tigray from other parts of the country. “The army will not go anywhere,” Birhanu Jula told reporters, amid fears that the conflict would spill into other regions of Africa’s second-most populous nation. “The war will end there.”

For his part, the Tigray region’s president, Debretsion Gebremichael, told reporters that “we are in position to defend ourselves from enemies that waged war on the Tigray region. ... We are ready to be martyrs."

Ethiopia’s government has not commented on the bombing allegation, read out Thursday evening on the Tigray regional broadcaster.

The strong words came a day after Prime Minister Abiy Ahmed told the nation the military will carry out further operations this week in response to an alleged deadly attack on a military base by the regional government.

Observers warn that a civil war in Ethiopia involving Tigray could destabilize the already turbulent Horn of Africa. The prime minister, awarded the Nobel Peace Prize last year for his sweeping political reforms, now faces his greatest challenge in holding together a country of some 110 million people with multiple ethnic and other grievances.

Communications remained cut off in the northern Tigray region after services disappeared at just around the time Abiy’s office first announced the attack and military action early Wednesday. The lack of contact has challenged efforts to verify the Ethiopian federal government’s account of events.

The Tigray capital, Mekele, appeared calm on Thursday morning but skirmishes took place elsewhere, a source told The Associated Press, speaking on condition of anonymity because they were not authorized to speak to the media about it.

Ethiopia’s army deputy chief asserted that members of the Tigray People’s Liberation Front are “fleeing and joining the army; those injured are receiving medical treatment.” The army was trying to avoid civilian casualties, he said.

The Tigray leader asserted that the Ethiopian army’s northern command is siding with the Tigray people, and he confirmed that fighting is also taking place in an area bordering the Amhara region, far from where the original clash was reported. “They are surrounding us with their forces,” he said.

“Certainly there is fighting, but I don’t think anyone can credibly assert who attacked who first,” former U.S. diplomat Payton Knopf, a senior advisor with the United States Institute of Peace, told the AP on Wednesday night. He wondered why the well-armed Tigray region’s forces would start by raiding a command post: “They’re not lacking for weaponry.”

Aid organizations and human rights groups are pleading for communications links to be restored and warning of a humanitarian disaster if hundreds of thousands of people flee fighting in the midst of the COVID-19 pandemic.

Ethiopia has imposed a six-month state of emergency on the Tigray region, which played a dominant role in the country’s government and military before Abiy took office in 2018. Since then the region, feeling marginalized, has split from the ruling coalition and defied Abiy by holding a regional election in September that the federal government called illegal.

Tigray borders Eritrea, which fought a bloody border war with Ethiopia before the countries made peace in 2018, shortly after Abiy took power. The Tigray regional government has accused Eritrea of teaming up with Ethiopia’s federal government in this week’s offensive. Eritrea’s information minister did not respond to a request for comment.

TPLF officials have said airspace over the region is closed, and accused the federal government of deploying troops to “cow the people of Tigray into submission by force.”

The TPLF also invited other members of the security forces across Ethiopia to join it in “opposing the colonel Abiy’s regime.”

The head of Ethiopia’s new state of emergency committee, Redwan Hussein, has said the federal government’s conflict is with a “small clique of TPLF circles that are keen to destabilize Ethiopia,” and the government must do everything possible to “liberate the Tigrayan people.”

“Given the strength of Tigray’s security forces, the conflict could well be protracted,” the International Crisis Group said in a statement Thursday. “Tigray has a large paramilitary force and a well-drilled local militia, thought to number perhaps 250,000 troops combined.”

It appears unlikely that Ethiopian forces would quickly oust the TPLF leadership, the group said, and even then loyalists could mount “sustained resistance.” The statement called for “immediate, concerted mediation – local, regional and international.”

The TPLF over the weekend told the AP it’s not interested in negotiating with the federal government. It was not clear if that stance had changed in light of the new events.

It also was not clear who might step in to mediate.

U.S. Secretary of State Mike Pompeo in a statement overnight seemed to support the federal government’s account of events, saying the U.S. was “deeply concerned by reports that the Tigray People’s Liberation Front carried out attacks on Ethiopian National Defense Force bases in Ethiopia’s Tigray region on November 3. We are saddened by the tragic loss of life and urge immediate action to restore the peace and de-escalate tensions.”