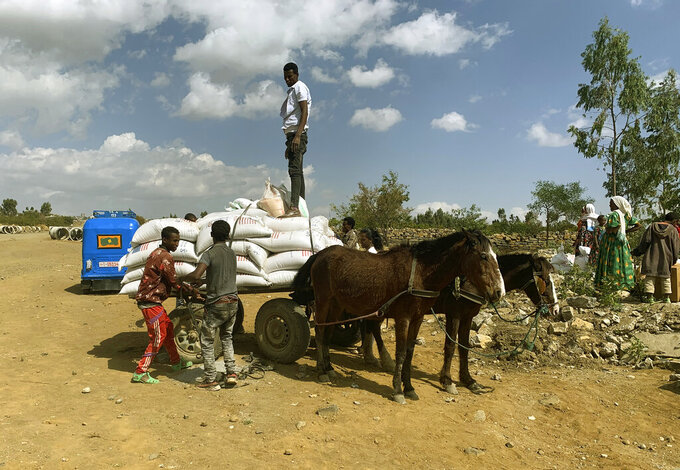 In this Tuesday Jan. 12, 2021 photo provided by the Catholic Relief Services, people affected by the conflict in Tigray load food aid provided by USAID and Catholic Relief Services onto a donkey cart to be tansported to their home, outside Mekele, Ethiopia. From “emaciated” refugees to crops burned on the brink of harvest, starvation threatens the survivors of more than two months of fighting in Ethiopia’s Tigray region. Authorities say more than 4.5 million people, or nearly the entire population, need emergency food. The first humanitarian workers to arrive after weeks of pleading with Ethiopia for access describe weakened children dying from diarrhea after drinking from rivers, and shops that were looted or depleted weeks ago. (Catholic Relief Services via AP)

The conflict that began in November between Ethiopian forces and those of the Tigray region who dominated the government for nearly three decades continues largely in shadow. Some communications links are severed, residents are scared to give details by phone and almost all journalists are blocked. Thousands of people have died.

Ethiopia’s deputy prime minister, Demeke Mekonnen, and colleagues briefed a private gathering hosted by the Atlantic Council think tank on Friday. They said nearly 1.5 million people in Tigray have been reached with humanitarian aid, and they expressed unease at “false and politically motivated allegations” of mistreatment of refugees from neighboring Eritrea, the state-affiliated Fana Broadcasting Corporate reported. It said Biden administration staffers attended the meeting.

The refugees have been targeted by soldiers from Eritrea, who are fighting alongside Ethiopian troops against the Tigray forces. The Biden administration has pressed Eritrea to “immediately” withdraw them, citing credible accounts of looting, sexual assault and other abuses.

Despite Ethiopia’s latest assertions, its recently appointed administrators in Tigray have estimated that more than 4.5 million people, or close to the region’s entire population, need emergency food aid and some people have begun dying of starvation. That's according to leaked documents from a crisis meeting of government and aid workers in early January.

And a new account by a Doctors Without Borders emergency coordinator in Tigray, Albert Vinas, says “we are very concerned about what may be happening in rural areas,” with many places inaccessible because of fighting or difficulties in obtaining permission.

“But we know, because community elders and traditional authorities have told us, that the situation in these places is very bad,” he said in the account posted online Friday.

He described Tigray residents handing his colleagues pieces of paper with phone numbers and asking for help in reaching their families, whom they hadn't heard from for weeks.

“We saw a population locked in their homes and living in great fear,” he wrote after visiting the city of Adigrat and the towns of Axum and Adwa starting in late December.

In Adigrat, one of Tigray's largest cities, “the situation was very tense and its hospital was in a terrible condition,” Vinas added, with “no food, no water and no money. Some patients who had been admitted with traumatic injuries were malnourished.” One woman had been in labor for a week.

Beyond hospitals, up to 90% of health centers between the Tigray capital, Mekele, and Axum to the north toward Eritrea were not functioning, he said. “There is a large population suffering, surely with fatal consequences. ... There have been no vaccinations in almost three months, so we fear there will be epidemics soon.”

In a separate account posted by the World Peace Foundation on Friday, former senior Ethiopian official Mulugeta Gebrehiwot Berhe in a phone interview from rural Tigray told director Alex de Waal that “hunger among peasantry is crippling” in areas bordering Eritrea after Eritrean forces burned or looted crops just before the harvest.

“Soon, we might see a massive humanitarian crisis,” Mulugeta said.

Eritrean officials have not responded to questions nor confirmed their soldiers’ involvement, and Ethiopia has denied their presence despite witness accounts.

The food situation in Tigray was already “extremely bad” before the fighting began because of a locust outbreak and the COVID-19 pandemic, the Oxfam country director in Ethiopia, Gezahegn Kebede Gebrehana, has told The Associated Press.

“When the fighting took place, a lot of people fled into the bush. But when they came back, most found their houses destroyed or all belongings looted,” he said after an assessment in southern Tigray, by some accounts the most accessible part of the region. “Food is a very, very prominent necessity, from what we saw.”

International pressure continues on Ethiopia to allow unrestricted humanitarian access to Tigray, now a complicated patchwork of local authorities, but Gezahegn warned against suspending aid to the government as the European Union recently did.