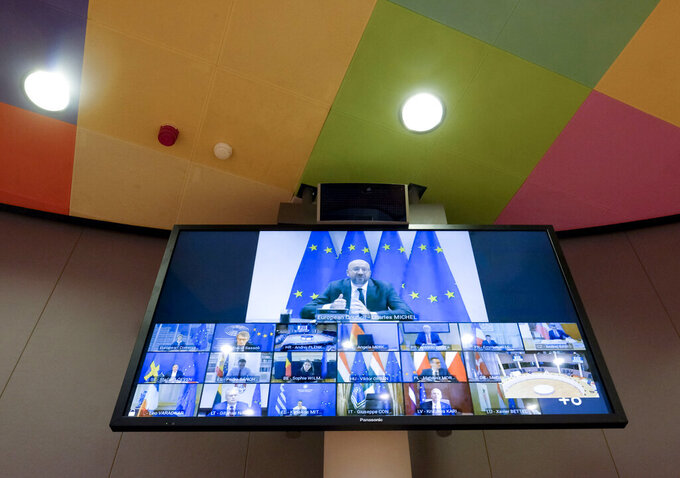 European Council President Charles Michel, top of screen, speaks to EU leaders during an EU summit, in video conference format, at the European Council in Brussels, Friday, June 19, 2020. As they brace for the worst economic downturn since the Great Depression, leaders of the European Union's member states will discuss on Friday the bloc's future long-term budget and a multi-billion post-coronavirus recovery plan. (Olivier Hoslet, Pool Photo via AP)

BRUSSELS (AP) — European Union lawmakers called Friday for an investigation into the alleged misuse of EU funds in the Czech Republic and warned of a possible conflict of interest involving Czech Prime Minister Andrej Babis on a day when he and the bloc's other leaders debated their next multi-billion-euro budget.

A leaked EU audit last year concluded that the populist billionaire might have had a conflict of interest over subsidies involving his former business empire. More than 100 million euros ($112 million) could be involved. Babis denies any wrongdoing and has accused the EU of trying to destabilize his country.

In a resolution, adopted by 510 votes to 53, the lawmakers deplored that Babis “was and continues to be actively involved in the implementation of the EU budget in the Czech Republic in his position as Prime Minister … while still controlling the Agrofert Group as a founder and the sole beneficiary of two trust funds.”

The resolution called on the European Council, the forum for the leaders of the EU's 27 member nations, “to take all necessary and appropriate measures to prevent conflicts of interest in the context of the negotiations for the future EU budget.”

The leaders held inconclusive video talks Friday on a massive coronavirus rescue package that could total around 750 billion euros ($841 billion) and which would be tied to the EU’s next long-term budget, expected to stand at more than 1 trillion euros ($1.1 trillion).

The parliament resolution also called on the European Commission, which proposes EU laws and ensures they’re enforced, to rapidly conclude its own audit and make the findings public.

The conservative European People’s Party, the biggest bloc in the parliament, said that “the distribution of EU funds in the Czech Republic is neither fair nor transparent but designed to favor the private interests of Prime Minister Andrej Babis.”

The resolution follows a fact-finding mission to Prague in February by the parliament’s budgetary control committee, which has no legal power to investigate national budgets or even oversight of the budget of the European Council.

Committee Chairwoman Monika Hohlmeier said the information gathered “points to the intentional establishment of rules in the Czech Republic which hide real beneficiaries of subsidies, favor big conglomerates and prevent controlling authorities from carrying out checks on this system.”

Hohlmeier and other members of the fact-finding mission said they were routinely threatened while in the Czech Republic, and since, including by individuals in high government office.

Czech EU lawmaker Thomas Zdechovsky said he and his family received thousands of threats through social media, email and messaging apps during the coronavirus lockdown. He, his wife and four children were placed under police protection. Police detained a number of people and charged some of them, he said.

“They even said if we go outside they would find us in the street. They described how we would be murdered and what they would do to me and my family,” Zdechovsky told reporters Thursday. “This is the result of Mr. Babis calling me and (Czech Greens lawmaker Mikulas Peksa), traitors to the nation.”

Babis apologized soon after suggesting that the men were traitors.

Holhmeier said the group was “confronted with a situation of aggressivity we never have faced before” over the mission. She said that while members of the ground are used to some hostility as politicians, the attacks from the top level of government were of “a new dimension.”

“We’re only doing something normal, just checking whether the taxpayer’s money has been correctly disbursed,” Holhmeier said.