EU, US agree to suspend tariffs over Airbus-Boeing dispute 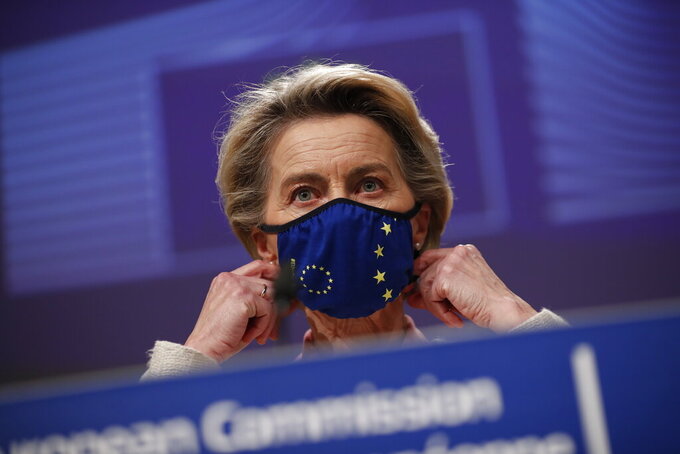 BRUSSELS (AP) — A first phone call Friday clinched the first trade breakthrough to start rebuilding trans-Atlantic relations between the United States and the European Union in the wake of the Trump presidency.

Von der Leyen said that “as a symbol of this fresh start, President Biden and I agreed to suspend all our tariffs imposed in the context of the Airbus-Boeing disputes, both on aircraft and non-aircraft products, for an initial period of 4 months."

It hardly covered all outstanding issues which were left to fester ever more under the four-year presidency of former president Donald Trump, but the EU gladly took whatever it could get from the first personal exchange between the two.

Von der Leyen called it “a very positive signal for our economic cooperation in the years to come.”

"This is excellent news for businesses and industries on both sides of the Atlantic,” she said.

With the initiative to ease the aircraft fight that long weighed on trade relations, the 27-nation bloc is seeking to rekindle the spirit of cooperation between Washington and Europe that has long defined global diplomacy.

Von der Leyen hopes it is the first indication that both the United States and Europe will stand shoulder to shoulder like they so often over the past century to face global challenges.

Von der Leyen said she invited Biden to a global health summit in Rome on May 21 to streamline the fight against COVID-19, the common enemy that has killed over a million people in the EU and U.S. combined. She hope it would extend to foreign policy issues as well, where both could cooperate better to face the rising power of China.

On Friday though, it was trade that mattered and the suspension will give a four-month window to address the more fundamental issues. In the aircraft dispute, the U.S. was allowed to impose tariffs on $7.5 billion of EU exports to the U.S and as a result of the deal, EU tariffs will be suspended on $4 billion of U.S. exports.

The tariff suspension will affect everyone from French winemakers to German cookie bakers in Europe and U.S. spirits producers among many others.

“Lifting this tariff burden will support the recovery of restaurants, bars and small craft distilleries across that country that were forced to shut down their businesses during the pandemic," the U.S. Distilled Spirits Council said.

Not that both sides can now drink to the cessation of trade hostilities.

Still outstanding, for example are the tariffs that Trump slapped on EU steel and aluminum, which enraged Europeans and other allies by calling their metals a threat to U.S. national security. The so-called Article 232 proceeding both hurts European producers and raises the cost of steel for American companies. Europe retaliated by raising tariffs on U.S.-made motorcycles, bourbon, peanut butter and jeans.

And Friday's mellow phone call has not dented Europe’s push for digital taxes on American tech behemoths like Google and Amazon.

The breakthrough in the aircraft dispute, heading into its 17th year, should not be underestimated though.

Only last November, the EU imposed tariffs on up to $4 billion worth of U.S. goods and services over illegal aid for plane maker Boeing, even though the 27 EU nations already held out hope relations would improve under Biden.

The move came only a few weeks after international arbitrators gave the EU the green light for such punitive action. The World Trade Organization had deemed illegal some U.S. support for Boeing — which is a bitter rival to Europe’s Airbus — and said the EU could make up for that with a limited amount of penalties on U.S. trade.

The WTO had ruled that Boeing was given an unfair edge over Airbus by tax breaks from Washington state, where Boeing once had headquarters. But after the WTO decision, the state repealed the tax breaks, making the EU’s complaint obsolete in the view of U.S. officials.