Euro 2020 not at risk from UEFA block on Azerbaijan hosting 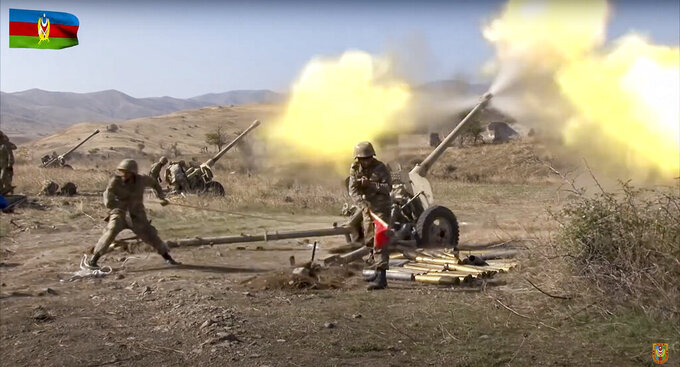 GENEVA (AP) — UEFA will keep planning for European Championship games in Azerbaijan next year despite deciding Tuesday the country cannot host its competitions “until further notice” during conflict with neighboring Armenia.

Baku is due to host three Euro 2020 group-stage games -- featuring Switzerland, Turkey and Wales -- in June, then a quarterfinal on July 3 at the 68,000-capacity Olympic Stadium.

Azerbaijan is among 12 host nations for the 24-team tournament that was postponed by one year because of the coronavirus pandemic.

One intended Euro 2020 host, Belgium, dropped out three years ago when a stadium project in Brussels failed. The four games in Brussels were moved to Wembley Stadium in London, which had previously been picked for the semifinals and final.

Two weeks ago, UEFA moved Nations League home games for Azerbaijan and Armenia to neutral countries amid their conflict over the territory of Nagorno-Karabakh. The historic dispute flared again last month.

“UEFA is of the opinion that, at the present time, the conditions to stage UEFA matches in these countries are not met,” the European soccer body said in a statement.

“The situation in the region will be monitored,” UEFA said, though adding Tuesday’s decision by its executive committee “does not affect the ongoing planning for the staging of UEFA Euro 2020 matches in Baku in June next year.”

The next game affected will be Qarabag’s Europa League game against Villarreal on Oct. 29. It was to be played in Baku, at a different stadium.

Both countries have home games in the Nations League in November that will need to find neutral venues.

This month, Azerbaijan played its home game in Albania and Armenia switched to Poland.

Nagorno-Karabakh lies within Azerbaijan but has been controlled by ethnic Armenian forces since 1994. A separatist war started after the breakup of the Soviet Union three years earlier.

For security reasons since 2007, UEFA has separated national and club teams from Armenia and Azerbaijan in its tournament draws.