Euro economy burdened by pandemic, seen lagging US and China 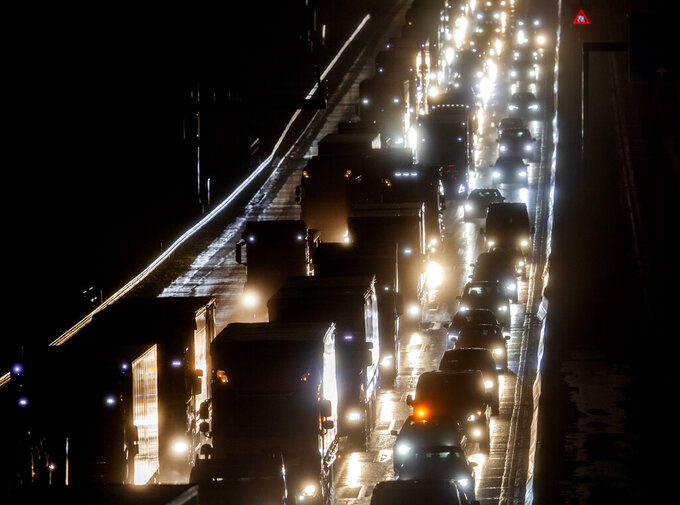 Cars and trucks drive on a highway in Frankfurt, Germany, on a rainy Friday, Jan. 29, 2021. (AP Photo/Michael Probst)

FRANKFURT, Germany (AP) — The European economy shrank 0.7% in the last three months of 2020 as businesses were hit by a new round of lockdowns aimed at containing a resurgence of the coronavirus pandemic.

The drop from the previous quarter was not as sharp as experts had feared. But the official figures released Tuesday couldn't erase a gloomier outlook for this year: the 19 countries that use the euro are forecast to lag China and the U.S. in bouncing back from the worst of the pandemic.

Tuesday's figures from statistics agency Eurostat underscored a rollercoaster year of freakish economic data, with a plunge of 11.7% in the second quarter, the biggest since statistics started in 1995, followed by a rebound of 12.4% in the third quarter in late summer.

The winter wave of coronavirus infections has meant new restrictions on travel and business activity, although companies in some sectors such as manufacturing have been better able to adjust than services businesses such as hotels and restaurants.

The German economy, Europe's biggest, grew by a scant 0.1% in the fourth quarter while France saw a smaller than expected drop of 1.3%. Overall, economists had expected a drop in the eurozone of as much as 2.5%. For the year, the eurozone shrank 6.8%.

The figures arrive amid disenchantment and finger-pointing over the slow pace of vaccine rollouts in the European Union, while the U.K., which has left the EU, started earlier and has vaccinated people at a faster pace.

“While the eurozone GDP data were better than what we were expecting only a week ago, the short-term prospects for the European economy remain clouded by a challenging health situation in several countries and an underwhelming start of the vaccination roll-out,” said Nicola Nobile, lead eurozone economist at Oxford Economics.

The restrictions on everything from hair salons to pubs has not improved the mood either, despite the resulting dip in infections. Leaders like German Chancellor Angela Merkel warn it's too early to ease up given the newer, more contagious variants.

Meanwhile, pressure is growing on people like Renee Gorgoglione, a restaurant owner who was among about 1,000 people protesting against lockdown restrictions in Spanish vacation destination Palma de Mallorca over the weekend.

The eurozone is expected to reach 2019 levels of economic output only in 2022, say officials from the European Central Bank. That contrasts with China, which has already regained the pre-pandemic level of output, and with the U.S., where Congressional budget experts foresee a rebound to 2019 levels by the middle of this year. The International Monetary Fund last month cut its forecast for eurozone growth this year to 4.2% from 5.2%

IMF chief economist Gita Gopinath said there were multiple factors explaining why Europe lags. European governments restricted activity more sharply to save lives; several European countries such as Greece, Spain and Italy are heavily dependent on tourism, which has been ravaged by the pandemic, and Europe has a large share of small and medium size businesses that have had tougher going than larger firms.

Pointing to the fiscal stimulus package in the U.S., Erik Nielsen, the chief economist for the UniCredit Group bank, called for “an acceleration of fiscal effort” in Europe. He said that could include more government borrowing and spending, taking advantage of very low interest rates. The current data leave no doubt that “the eurozone will be the last major economy to return to pre-pandemic levels,” he said.

“Beyond the potential health consequences, slow vaccination progress can force countries to maintain tight lockdowns for longer, thus delaying the start of the economic rebound,” said Holger Schmieding, chief economist at Berenberg bank. “In addition, we have to watch the potential political consequences. ”

Schmieding said a perception that the EU is not handling the crisis well could undermine national governments and “nourish EU-sceptic sentiment in parts of the EU electorate."