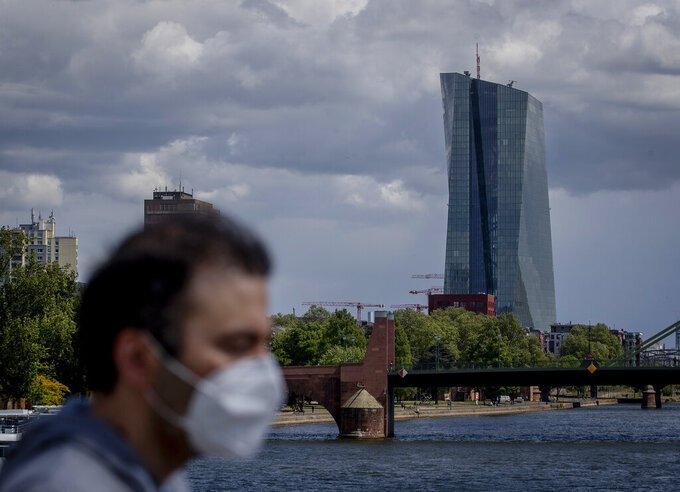 FILE - In this Wednesday, April 29, 2020 file photo, a man walks in front of the European Central Bank in Frankfurt, Germany. Official figures Tuesday Sept. 1, 2020, shows the unemployment rate across the 19 countries that use the euro currency rose modestly to 7.9% in July as the jobless spike was held down by temporary government job-support programs and the relaxation of some coronavirus containment measures. (AP Photo/Michael Probst, File)

FRANKFURT, Germany (AP) — At first glance, unemployment across the 19 countries that use the euro currency appears remarkably low in the face of a savage recession brought on by the coronavirus. It's unlikely to remain so over the coming months as government support measures start to expire.

Official figures show that the eurozone's unemployment rate rose modestly to 7.9% in July as job losses were held down by temporary government job-support programs. But weaker inflation amid sweeping announcement of layoffs suggest that the eurozone economy faces a long struggle to recover.

The eurozone's overall jobless rate inched up from 7.7% in June as the number of people labeled as unemployed increased by 344,000, according to Eurostat. In the same month a year earlier the jobless rate was 7.5% By comparison, the U.S. unemployment rate has leapt to 10.2% from 3.6% at the start of the year despite a paycheck protection program that gave some businesses forgivable loans if they kept people on.

Government programs that temporarily pay most of workers' wages if companies put them on shorter hours or no hours have helped keep millions on the job — but the respite may not last as the programs come to an end and the coronavirus continues to restrict travel and activity.

“When the clock strikes midnight, however, and short-time work schemes come to an end, the fairy tale is unlikely to continue,” said analysts at ING bank. “We expect a second wave of job losses towards the end of the year and going into 2021 although the peak in unemployment should still remain below the highs seen in the aftermath of the financial crisis.”

Major employers have announced thousands of layoffs to counter what is expected to be reduced business in the months ahead. Some are household names such as automaker Renault, airline Lufthansa, travel company TUI, and industrial conglomerate ThyssenKrupp.

Virus cases have risen in Spain, France and Germany in recent days, raising fears of a further wave of restrictions on gatherings and activity.

A further sign of weakness in the eurozone economy was evident in August inflation figures showing consumer prices falling by 0.2% from the year before. The negative reading was down from a 0.4% increase in July. Analysts attributed some of the drop to the late timing of summer sales in France and Italy and to a cut in sales taxes paid on consumer purchases in Germany.

The European Central Bank is pumping 1.35 trillion euros ($1.6 trillion) in newly printed money into the economy through bond purchases, a step aimed at pushing up inflation to more normal levels and supporting the recovery. ECB officials have said the bank intends to use the full amount due to the bank’s baseline expectation for a very subdued inflation outlook.

Core inflation, which excludes volatile food and fuel prices, sagged to 0.4% from 1.2%. That is a sign of ongoing weakness in demand, said Jack Allen-Reynolds, senior Europe economist at Capital Economics. He said the jobs and inflation figures released Tuesday “put the ECB’s challenge in stark relief" compared with the situation facing the U.S. Federal Reserve.

“While the Fed has recently announced that it will tolerate above-2% inflation, the ECB is struggling even to hit its more modest aim of ‘below, but close to, 2%’ inflation," Allen-Reynolds said. “Monetary policy in the eurozone will need to remain extremely loose for many more years to come.”