Even flow: Shelton brings positivity and grit to Pirates 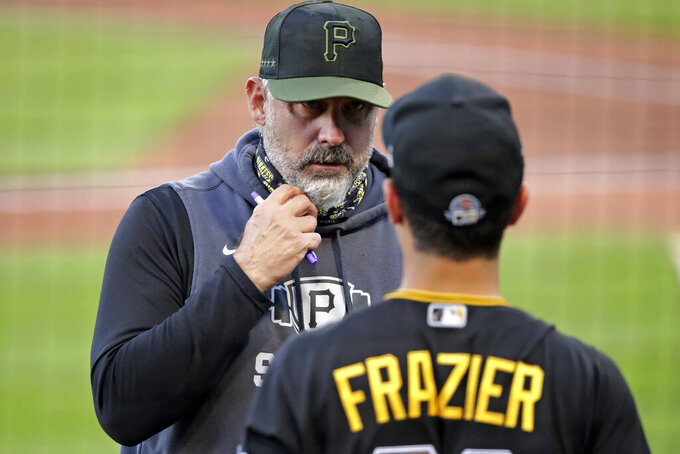 FILE - In this July 15, 2020, file photo, Pittsburgh Pirates manager Derek Shelton, right, talks with Adam Frazier between innings of an intrasquad baseball game at PNC Park in Pittsburgh. The Pirates first-year manager is a mix of old-school grit and new-school analytics nerd. The club also believes he's a breath of fresh air for a franchise in need of a jolt. (AP Photo/Gene J. Puskar, File )

PITTSBURGH (AP) — The initial dream died quickly and quietly late in 1993 when surgeons opened up Derek Shelton's mangled right elbow and tried to piece it back together. It didn't take. At least not well enough for Shelton to continue his baseball career as a catcher who relied more on tenacity than talent to get by.

Still, there was something about the 23-year-old that stuck with Glenn Sherlock. Maybe it was the way the good-natured kid from southern Illinois so willingly gave up his body for pitches in the dirt. Maybe it was the care he took while going over a game plan with each starter. Maybe it was all the mundane tasks Shelton did in the withering Florida heat that his teammates never noticed but his coaches like Sherlock couldn't miss.

All the pieces for a future big league manager were there. The sharp mind. The quick wit. The ability to adjust on the fly. Sherlock, who coached Shelton in the New York Yankees' system more than a quarter-century ago, saw it right away.

“I think he busted his tail and did everything,” Sherlock said. “But he was one of those guys that was doing all the drills. He was an overachiever, a hustler, a grinder.”

And also, a realist.

“I wasn't a very good player,” said Shelton, though that's maybe not the right adjective for someone who hit .341 in the low minors.

Not long after Shelton came to after surgery, he knew whatever small shot he had at reaching the major leagues was over, and it was on to plan B, which will reach its ultimate destination Friday night in St. Louis when Shelton stands on the top step of the dugout in his first game as Pittsburgh Pirates manager.

The franchise was in search of a culture change when it hired the now 49-year-old Shelton to replace Clint Hurdle last fall. Hurdle's booming voice and commanding presence served as the paternal fulcrum that helped steer the Pirates out of two decades of losing. The message soured along with the results in recent years.

Shelton, with his collection of eclectic T-shirts, slicked-back hair and beard that's turning a little more salt and a little less pepper by the day looks more like a roadie for his beloved Pearl Jam.

Where the Pirates relied on Hurdle's confidence and optimism to move forward, Shelton's constant self-deprecation is disarming. It also takes some of the pressure off a young club trying to find a way forward following a chaotic second-half fall in 2019 that led to major changes in upper management.

Don't let the constant string of jokes fool you. Underneath the easy smile and the eye-catching pair of Jordan cleats lies a manager with grit to go along with smarts.

The combination jumped out to Los Angeles Angels manager Joe Maddon when he hired Shelton to serve as hitting coach for the Tampa Bay Rays in 2010.

“He really mulls over things quickly,” Maddon said. “He’s got a great sense of humor, which equals he’s a great conversationalist. And he’s gregarious. So he’s got all these different attributes outside of just knowing baseball that I think would contribute to him being a great manager just based on all the different job descriptions or titles that this entails today. I think he umbrellas all that.”

An umbrella that was forced to expand to unprecedented levels during MLB's three-plus month shutdown in response to the coronavirus pandemic. Yet rather than try to micromanage every single aspect of overseeing the team, he delegated. He video bombed Zoom calls among different position groups while making sure he didn't step on the toes of his coaching staff, a byproduct of spending 14 years as a major league assistant in some capacity, the last two in Minnesota.

He refused to use the shutdown as an obstacle to the kind of team-building required if the Pirates want to be competitive. Shelton's relentless amiability helped keep the team engaged even while scattered across the country, his boss included.

“His energy, his positivity and his focus on the task at hand, which is to put our players and staff in the best position to succeed, has never wavered,” general manager Ben Cherington said. “His positivity through that, his sense of humor through that it’s been helpful probably for me even at times.”

Shelton rarely misses an opportunity to praise his staff and he has a way of delivering messages with a dose of humanity. He appreciates the work it took for them to get here.

Asked if he wants his club to mold to his identity, Shelton shifts the focus elsewhere.

“I realize my role as the manager, they’re going to take and feed off a little bit of how I am and especially in terms of the culture we’re trying to create,” Shelton said. “But the big thing for our group is I want those guys to have their own personalities.”

Still, he will take a moment for himself Friday night to drink everything in from the top step of the dugout. It's a moment he always believed would arrive. And when he looks around, he'll see Sherlock, who will be part of the ride this season as an assistant.

Shelton's title might be different than it was as a player. His mindset has not. And Sherlock believes the Pirates will be better for it.

“I think he’s demanding and I think he expects things to be done a certain way but at the same time I think he respects the players and respects what they have gone through to get to this level and he’s going to give them some rope," Sherlock said. "I think the players are going to love him.”