Even with Leonard and George, Clippers stall in playoffs 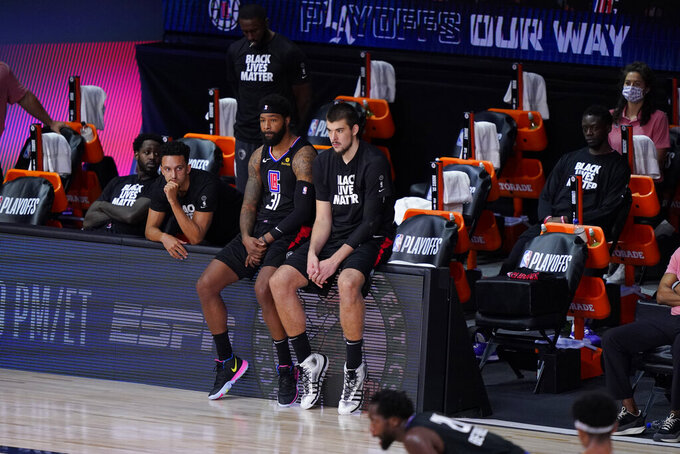 The Los Angeles Clippers players sit on the bench during the second half as they fall to the Denver Nuggets in an NBA conference semifinal playoff basketball game Tuesday, Sept. 15, 2020, in Lake Buena Vista, Fla. (AP Photo/Mark J. Terrill)

LOS ANGELES (AP) — The more things changed for the Los Angeles Clippers, the more they stayed the same.

They shocked the league by adding superstars Kawhi Leonard and Paul George to a proven cast, immediately creating major expectations for the franchise to win its first NBA championship.

In the end, the Clippers reverted to their old selves.

They blew a 3-2 series lead and double-digit leads in multiple games against the Denver Nuggets, and got sent packing from the NBA playoff bubble. The franchise once mocked as the laughingstock of the NBA couldn't erase a big part of its ignominious history: 0-8 all time in games in which it could clinch a spot in the conference finals.

“We did have championship expectations. We had the talent to do it,” Lou Williams said. "I don’t think we had the chemistry to do it and it showed."

George missed time to start the season while recovering from two offseason shoulder surgeries. Playing for his third team in three years, Leonard followed a load management program before the pandemic, rarely playing back-to-back games because of his left knee. The Clippers ran though numerous lineup changes and then the coronavirus pandemic hit, halting the season in March. Once the NBA resumed play in the bubble in Florida, the team lost players.

Montrezl Harrell, the Sixth Man of the Year, missed 30 days; Patrick Beverley was out 16 days; Williams missed 14 days, including 10 in quarantine after visiting a strip club during an excused absence from the bubble.

It didn't happen, especially in Game 7. Leonard scored 14 points on 6 of 22 shooting; George scored 10 points on 4 of 16 shooting. The Clippers had just 33 points in the second half, and they didn't make a field goal in the fourth quarter until 4:58 was left in the game.

George sees no need to tear up the roster.

Leonard owns two championship rings (San Antonio and Toronto) and Rivers has one (Boston). George joined Leonard in coming home to Los Angeles for a shot at his first in his 10th season in the league after years of futility in Indiana and Oklahoma City.

“We can only get better the longer we stay together and the more we’re around each other,” George said. “More chemistry for the group, the better. That's really the tale of the tape of this season. We just didn’t have enough time together.”

Leonard and George are under contract for one more year; then each has an option for the 2021-22 season.

After the game, fans took to the airwaves and social media to mourn or vent, with many calling for Rivers' job despite their personal affection for the veteran coach. He's guided teams to 3-1 leads in three series, and each time they've failed to advance. It happened to the Clippers against Houston in 2015, too.

Rivers has taken the Clippers to the playoffs in six of his seven years with the team.

“I've got a good group of guys, I really do,” Rivers said. “But we didn’t meet our expectations, clearly, because if we had, in my opinion, we’d still be playing.”