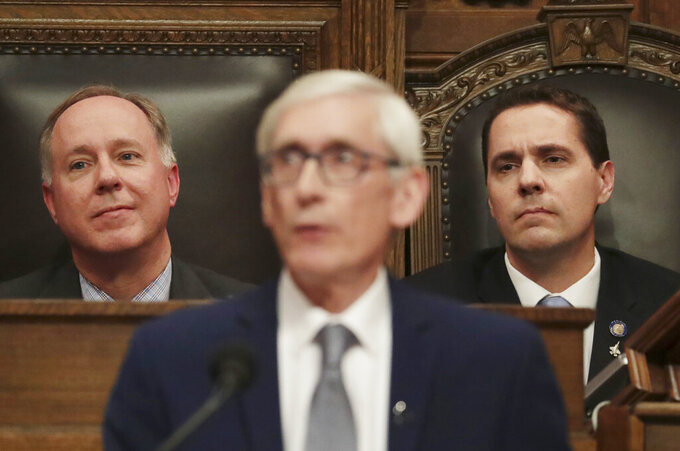 MADISON, Wis. (AP) — Gov. Tony Evers signed a bipartisan tax cut bill into law Thursday and signaled support for another bipartisan measure to help update the state's unemployment insurance system, rare compromises that come as Republicans have roundly denounced much of his state budget proposal as a liberal wish list.

But both Evers and Republican leaders have also detailed areas of agreement in the $91 billion spending plan, offering a road forward as the Legislature begins the process of debating the proposal.

Any agreement is notable given the terse relationship between Evers and Republicans over the past two years. The bill benefitting Wisconsin businesses that took federal Payroll Protection loans was the first Evers had signed in 10 months. Democrats have faulted Republicans for not meeting after April last year to address the pandemic, and Evers vetoed the first bill they passed this year to address COVID-19.

But on Thursday, Evers signaled support for a bill passed by the Senate that starts the long process of updating antiquated unemployment insurance systems to speed the processing of claims that were delayed during a flood of applications last year when the pandemic hit.

The bill also would waive the one-week waiting period to receive unemployment benefits until March 14 and extend limited liability from coronavirus-related lawsuits to businesses, governments and schools. Evers supported those provisions in the COVID-19 bill he vetoed that also included elements he opposed, such as forbidding employers from requiring workers to be vaccinated.

Evers had asked for $74 million in the budget to go toward unemployment system upgrades, money that Republicans have signaled they probably won't provide. The bill passed doesn’t include any funding and instead calls on the Evers administration to use federal money at first and then come back to ask for state funding as needed.

“While I wish the Legislature would have provided the funding we asked for that we need to fix this system once and for all, I’m glad the Legislature is finally taking this issue seriously after years of inaction,” Evers said in a statement. “It’s not enough, but it’s at least a step in the right direction.”

The Senate passed the bill on a bipartisan 27-3 vote, with three Democrats voting against. The Assembly could pass it as soon as Tuesday, sending the bill to Evers.

Amid the signs of compromise, Republicans on Thursday promised to kill major parts of Evers budget that he released on Tuesday.

“I would characterize his budget as a liberal’s dream,” said Republican Sen. Howard Marklein, co-chair of the Legislature’s budget committee, during a WisPolitics.com virtual event. He and other Republicans have indicated they will simply ignore Evers’ proposal and start building the budget based on what is law currently, the same approach they took two years ago.

Legalizing recreational marijuana, substantially repealing the Act 10 collective bargaining law, capping enrollment in choice schools and raising taxes on manufacturers are all Democratic priorities, but they were dead with the GOP-controlled Legislature before the ink dried on Evers' budget.

Both Marklein and budget committee co-chair Rep. Mark Born refused to commit to supporting other parts of the budget, including continuing the University of Wisconsin tuition freeze, allowing UW to borrow money, permitting counties and larger cities to increase the sales tax and expanding Medicaid, something Republicans have long opposed.

However, there has been bipartisan support for legalizing medical marijuana, as Evers has proposed. Both Republicans and Democrats support other Evers's priorities to expand broadband access, bolster funding for venture capital and businesses struggling to recover from the pandemic and increase education funding, although not as much as Evers wants

Evers expressed hope that once Republican saber rattling quiets down, both sides will find areas of agreement just as they did two years ago when Evers signed the budget that Republicans passed without a single Democratic vote.

“Obviously they want to play hardball right off the bat," Evers said of Republicans Wednesday on WTMJ radio. “I know we can find common ground. There’s no question about it.”