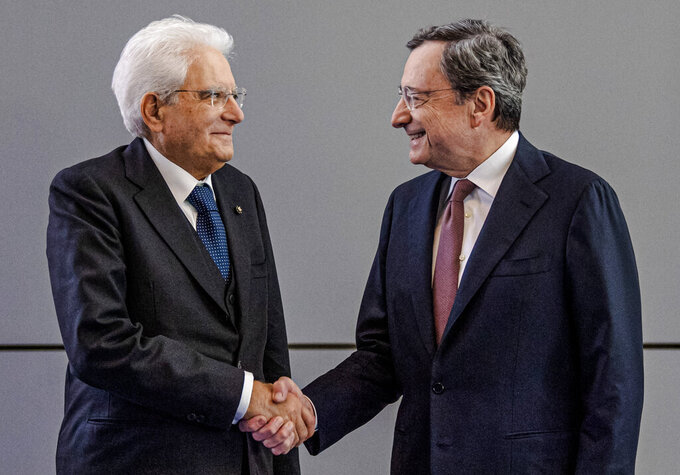 ROME (AP) — Former European bank chief Mario Draghi was positioned to lead what could quickly become Italy's next government after the Italian president concluded Tuesday that squabbling political parties failed in a last-ditch effort to form a new coalition and that the nation could ill afford fresh elections while engulfed in the COVID-19 pandemic.

President Sergio Mattarella told the nation that only two options remained after the “negative outcome" from days of frantic political negotiations to re-compose the center-left coalition that had formed the recently collapsed government of Giuseppe Conte.

The first was “a new government, able to deal with the grave present emergencies: health, social, economic financial,” said Mattarella, who is head of state. The second, he said, was immediate, early elections, a possibility that deserved careful consideration “because elections represent an exercise in democracy.”

Mattarella decided Italy quickly needed a ‘’government of high profile, that must not identify with any political formula" and that would be backed by political forces in the current in Parliament. He stopped short of saying who he had in mind for the premiership.

But right after his speech, a presidential palace official announced that the 73-year-old Draghi, who has been credited with saving Europe's single currency during his tenure as European Central Bank president in 2011-2019, had been summoned to meet with Mattarella at noon Wednesday. That would give Draghi the opportunity to formally accept such a mandate.

The fragile prospects for reviving Conte's government through a revamped political coalition disintegrated after former Premier Matteo Renzi gave a thumbs-down following days of frantic negotiations. Conte resigned last week after Renzi yanked his ministers from his tiny centrist Italy Alive party to protest what he said was the premier’s bumbling of the coronavirus pandemic.

Conte is now acting in a caretaker capacity.

Mattarella noted that after elections in 2013, it took four months to get a government in place, and after 2018 elections, five months. Repeating that would leave Italy suffering without a government in the "fullness of its functions for months, crucial, decisive, for the fight against the pandemic to utilize European funding and to face the grave social problems,'' he said.

"All these concerns are well in the mind of our fellow citizens, who are asking for concrete and rapid answers to their daily problems,'' the president said.

Nicknamed “Super Mario" for his work as the European Central Bank's president during the single currency crisis, Draghi was cited throughout these last weeks of Italy's political crisis as a possible solution if politicians couldn't overcome personality and policy clashes for the sake of the nation.

The pandemic has devastated Italy’s long-stagnant economy and left the country with Europe’s second-highest COVID-19 death toll. The government statistical agency ISTAT reported Monday that nearly 450,000 jobs were lost in the last year.

During the last-ditch discussions that failed Tuesday, the parties in what is now Conte’s caretaker government squabbled over European Union pandemic aid and other key policy issues that were blocking formation of a more solid coalition.

Mattarella had given the collapsed coalition parties a few days to see if they could re-combine in a new government with a dependable majority in Parliament.

His call for wide support for the next government, was swiftly taken up by a lawmaker from the Forza Italia opposition party of Silvio Berlusconi, the media mogul and former center-right premier. Mara Carfagna said Mattarella's appeal “for responsibility should spark authentic, profound reflection in whoever loves Italy and Italians and who still keeps the true sense of the world patriotism."

Earlier, Renzi put all the blame on the failed effort on the other parties, saying, “We take note of the ‘nyet’ of the colleagues of the ex-coalition," using the Russian word for “no.”

In turn, the populist 5-Star Movement, which was the main partner in back-to-back Conte governments since he came to power in 2018, contended that all Renzi wanted was more power.

“It's obvious that the aim was to obtain more (Cabinet) posts. This was his most pressing” goal in provoking the crisis, said Vito Crimi, a 5-Star leader.

Except for Renzi, all the other leaders of the former coalition parties had thrown their public weight behind Conte for a new mandate.

In yanking his support, Renzi contended that Conte was bumbling the challenge of managing how more than 200 billion euros (about $250 billion) in EU funds and loans would be spent to help Italy recover from the pandemic's damage, especially to the Italian economy.

The 5-Star Movement, which is close to Conte, resisted accepting billions of euros in EU loans aimed at bolstering the health system, aid the populists fear could make Italy beholden to EU dictates such as austerity measures.

Renzi had insisted that Italy should take the health system aid from Brussels.

Largely caught in the cross-fire has been the center-left Democratic Party, which Renzi led during his 2014-2016 tenure as premier and he broke away from to start Italy Alive shortly after Conte formed his second coalition government in September 2019.

Conte's first government, which took office in June 2018, partnered the 5-Stars with the right-wing League of Matteo Salvini. That coalition collapsed when Salvini withdrew his support in a failed maneuver to gain the premiership for himself. The Democrats, which then included Renzi, replaced Salvini's forces in Conte's second government.

Salvini had lobbied Mattarella in vain for early elections.