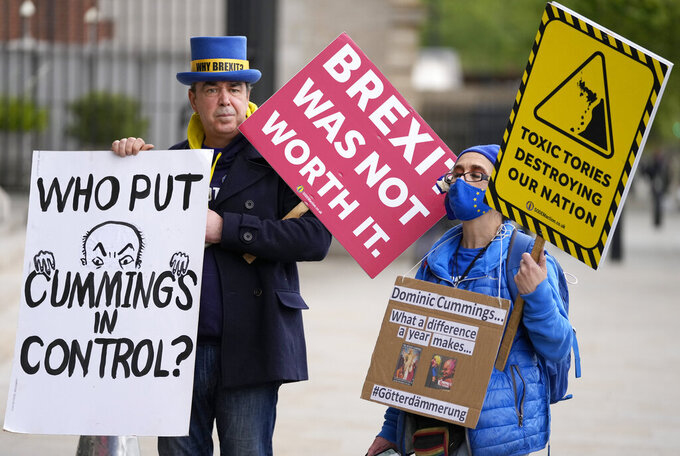 Protestors wait for Dominic Cummings, British Prime Minister Boris Johnson's most powerful and trusted aide up until last year, to arrive to attend a select committee hearing at Portcullis House in London, Wednesday, May 26, 2021. In recent days, Cummings has directed a torrent of criticism at Johnson's Conservative government in an ever-lengthening string of Twitter posts. On Wednesday, he plans to make the claims in person, testifying on live television to lawmakers investigating Britain's handling of COVID-19. (AP Photo/Frank Augstein) 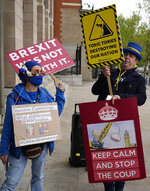 In a ferocious attack, Dominic Cummings claimed the government was slow and chaotic in its initial response to COVID-19, and he accused Johnson of failing to learn from early mistakes by resisting a second lockdown in the fall as virus cases soared.

Johnson, he told lawmakers in televised testimony, was “unfit for the job.”

“The truth is that senior ministers, senior officials, senior advisers like me, fell disastrously short of the standards that the public has a right to expect of its government in a crisis like this," Cummings said.

“People did not get the treatment they deserved. Many people were left to die in horrific circumstances."

The U.K. has recorded almost 128,000 coronavirus deaths, the highest toll in Europe, and experienced one of the world’s deepest recessions in 2020 as three successive lockdowns hobbled the economy.

A mass vaccination campaign that started in December has brought infections and fatalities down sharply, but the government acknowledges it will have to answer serious questions at a future public inquiry.

Cummings’ seven hours of testimony to Parliament’s science and health committees, who are investigating Britain’s pandemic response, gave a dramatic taste of what might come out.

He alleged a disastrous series of bad decisions and false assumptions within government in early 2020, saying Johnson initially regarded the virus as “just a scare story"

"He described it as the new swine flu” and mused about getting injected with the virus on live TV to allay people’s fears, Cummings claimed.

He said officials, including Johnson, went on vacation in February 2020 and were “literally skiing” as the outbreak grew.

By March, he said the government was consumed by chaos that Cummings said "seemed like an out-of-control movie.”

It was “like a scene from ‘Independence Day’ with Jeff Goldblum saying ‘The aliens are here and your whole plan is broken,’” Cummings said.

Johnson eventually imposed a nationwide lockdown on March 23, and was himself hospitalized in intensive care with the virus in April 2020.

Johnson defended the government's response on Wednesday, saying “to deal with a pandemic on this scale has been appallingly difficult."

"We have at every stage tried to minimize loss of life, to save lives, to protect the (health service) and we have followed the best scientific advice that we can,” Johnson said in the House of Commons.

One of the architects of the successful campaign to take Britain out of the European Union, Cummings was appointed a top adviser when Johnson became prime minister in 2019. A self-styled political disruptor who wanted to shake up government, he often expressed contempt for the civil service, politicians and the media.

Cummings made headlines in May 2020 when newspapers revealed he had driven 250 miles (400 kilometers) across the country after contracting COVID-19, despite a nationwide stay-at-home order. His defense — that he was seeking childcare help from relatives in case he got sick — rang hollow to many Britons who had made sacrifices to follow the rules.

Cummings acknowledged Wednesday that he hadn't told the whole truth. He said his real motivation in leaving London was his family's safety, because there had been threats to his London home.

Cummings left his job in November amid a power struggle inside government. Now a fierce critic of his previous employer, he accuses the government of sticking with a policy of “herd immunity” — allowing the virus to spread through the population while protecting the most vulnerable — until it was too late to prevent draconian lockdowns and many deaths.

He said the government believed -- wrongly, it turned out -- that the British public would never accept strict lockdown measures, and that locking down would simply lead to a later, steeper peak in deaths.

The government denies that herd immunity through infection was ever its policy.

Cummings also slammed the government’s failure to shut Britain's borders to keep out the virus, called the country’s initial lack of testing capacity a “disaster” and said patients with COVID-19 were rashly discharged from hospitals into nursing homes, where thousands died.

Without citing evidence, he excoriated Health Secretary Matt Hancock, accusing him of lying to the public and saying he “should have been fired." Hancock is due to give his own evidence to lawmakers next month. A spokesman for Hancock's office said, “We absolutely reject Mr. Cummings’ claims about the health secretary.”

Cummings alleged that Johnson refused to heed scientific advice to impose a second stay-at-home order in September and expressed regret about ordering the first lockdown.

He said Johnson told him, “I should have been the mayor in ‘Jaws’ and kept the beaches open.”

A second national lockdown was announced Oct. 31, and a third in January.

The government accused Cummings of downplaying the fact that he was at the heart of the government when key decisions were made.

“He was there at the time — what his motives would be I will leave to others," Transport Secretary Grant Shapps said.

Cummings apologized for not doing more to change the government’s strategy and said Johnson, whom he worked alongside for years, was “unfit for the job” of prime minister.