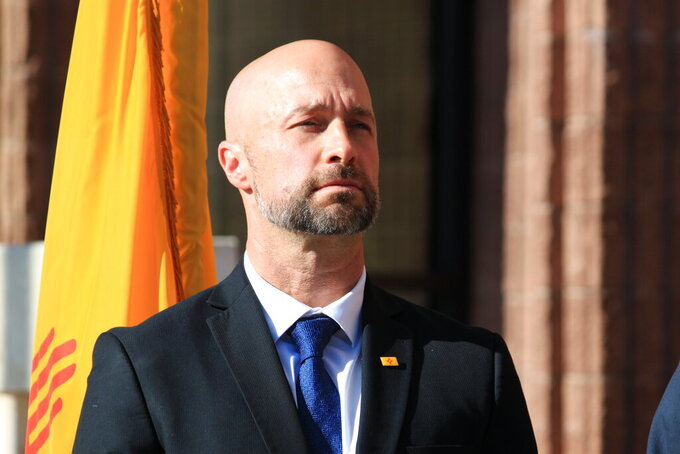 FILE - In this Sept. 12, 2019, file photo, then-New Mexico Workforce Solutions Secretary Bill McCamley listens to questions about wage theft complaints during a news conference in Albuquerque, N.M. New Mexico probably overpaid unemployment insurance benefits by an estimated $250 million during the coronavirus pandemic amid a backlog of investigations into potentially fraudulent claims, the budget and accountability office of the Legislature announced Wednesday, May 19, 2021, in a research report. The revelations arrive amid turbulence at the Workforce Solutions Department, where McCamley departed as agency secretary a month ago and a review is underway of inflated tax rates on employers for unemployment insurance. (AP Photo/Susan Montoya Bryan, File)

SANTA FE, N.M. (AP) — The former leader of the state Workforce Solutions Department that oversees unemployment benefits said his resignation in April was linked to threatening messages and incidents at the agency and elsewhere, in a string of Twitter posts Thursday.

Former Cabinet Secretary Bill McCamley announced the reasoning behind his decision to resign from the agency in a stream of 15 tweets. He did not respond to calls and texts to his cellphone.

“I left the position for no other reason than the safety of myself and my family,” said McCamley, a former state legislator and county commissioner, in a tweet. “I have received threats before as a public official, but this time seems different.”

McCamley indicated that he intends to relocate his home outside of New Mexico as a safety precaution.

The statements were made the day after state analysts reported that New Mexico may have overpaid unemployment insurance benefits by as much as $250 million during the coronavirus pandemic amid a backlog in claim investigations.

McCamley said his concerns about personal safety grew after a state-owned car was destroyed by an incendiary device and a possibly deranged man called the state labor agency to blame McCamley for unemployment problems and to ask for McCamley’s address.

It was unclear whether McCamley sought out police protection as a Cabinet secretary for Democratic Gov. Michelle Lujan Grisham and whether the threats and unsettling events he described had been investigated or prosecuted.

Lujan Grisham spokesman Nora Meyers Sackett said that “protocol prevents us from talking about security measures the state has taken or may take for employees facing threats.”

McCamley said security threats against public officials in Arizona and Michigan weighed in his decisions, along with the Jan. 6 siege on the U.S. Capitol.