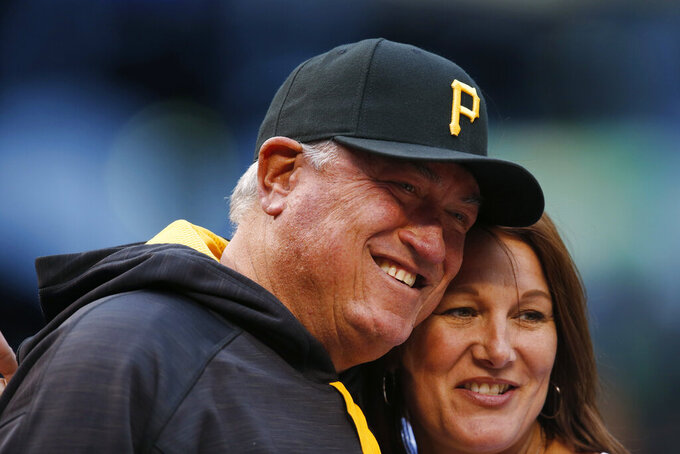 FILE - In this April 25, 2016, file photo, Pittsburgh Pirates manager Clint Hurdle, left, greets a well-wisher before the Pirates faced the Colorado Rockies in a baseball game in Denver. Hurdle began sending his daily notes of inspiration more than 10 years ago, during his days managing the Colorado Rockies. What used to be group text messages have turned into much more -- every morning, his Daily Encouragement emails go out to some 5,000 eager recipients. (AP Photo/David Zalubowski, File)

Clint Hurdle began sending his daily notes of inspiration more than 10 years ago, during his days managing the Colorado Rockies. They were a simple, small way of checking in with his staff to discuss leadership ideas, to offer support.

The dozen colleagues would share something good from the week. Something tough, too.

Hurdle never planned to be an important voice to friends and acquaintances near and far amid a global pandemic. Yet what used to be informal group text messages have turned into much more -- every morning, his Daily Encouragement emails go out to some 5,000 eager recipients.

The messages vary, but they're always upbeat.

He might borrow a line from the website The Daily Coach: “The time is now to live more strategically and courageously while engaging in work that is filled with impact and meaning.” He might offer a list of his week's resolutions, including, "Offer loving-kindness to my inner critic."

Or, he might tell his readers that no email will be coming Sunday. "Call someone you love.”

His audience ranges from sports stars to blue-collar workers.

“I’ve developed a few relationships that I didn’t have before. I’ve gotten to know people in all different walks of life,” Hurdle said during a call last week.

The concept began to grow early in the 2009 season. Two years after guiding the Rockies into the World Series, he was fired in late May.

Soon after, Hurdle was on a rare spring vacation when a Rockies staffer reached out. She told Hurdle his words of wisdom were sorely missed.

Hurdle’s wife, Karla, asked him about filling the void. He took a walk and decided he would resume the notes.

A major league player for 10 years and a manager for 17 more before he was fired by the Pittsburgh Pirates last September, Hurdle was known throughout baseball for his positive approach — with his big personality and frame to match.

Now riding out the coronavirus with his family at Anna Maria Island on Florida’s west coast, the 62-year-old Hurdle reads and scours blogs and podcasts for things to share.

At times, he accumulates so much material it gets backed up for several weeks. There's a place on his Web site, www.clinthurdle.com, to join the email distribution list.

“When the numbers started growing more and more, I go, ‘This is crazy,’” he said. But, “Nobody’s emailed us back and said, ‘This is ludicrous.’"

The emails have become so popular Hurdle found a web manager to help. He personally responds to each message, though sometimes has to tell his subscribers that this isn’t a platform to chat with a baseball manager.

One woman recently wrote to say his message was spot on for her. Hurdle calls those “God-winks.”

Hurdle is a recovering alcoholic -- “21 years,” he notes -- and was divorced before finding love again. He has lost high-profile jobs.

By his own admission, “I’m such a flawed guy.”

“I’ve traveled the dirt road. There have been times I’ve been fortunate there’s been somebody there,” he said. “There’s been an encourager, a hope broker, an arm lifter, whatever you want to call them. That’s all that I’ve tried to make happen with this daily email.”

And each time, Hurdle provides a reminder as he closes: