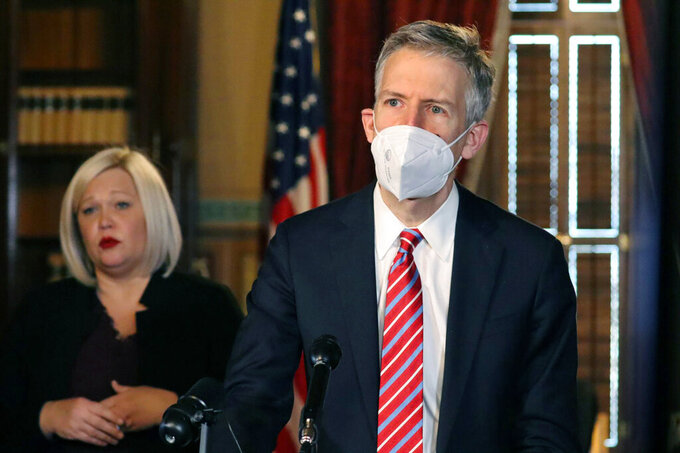 FILE- In a Dec. 18, 2020, file photo, provided by the Michigan Office of the Governor, then Michigan health director Robert Gordon addresses the state in Lansing, Mich. Former Michigan health director Gordon will testify next week before a legislative committee about his abrupt departure from Gov. Gretchen Whitmer's administration, following the panel's vote to subpoena him, Thursday, April, 22, 2021. (Michigan Office of the Governor via AP, File)

Gordon ordered coronavirus restrictions for more than three months after the Democratic governor lost powers in a court ruling. He resigned in January as director of the state Department of Health and Human Services and received $155,000 in a separation agreement signed by the chief lawyer in Whitmer's office.

The reason for his apparent forced exit is unclear. Whitmer has largely been mum. Gordon has said officials disagreed on policy and that the governor “deserves a health director with whom she is comfortable.”

He quit the same day he signed an order allowing restaurants to reopen for indoor dining after a monthslong shutdown following a resurgence of COVID-19. Amid criticism, the state and Gordon amended the severance deal last month to remove a confidentiality clause.

“I am committed to ensuring a more transparent and honest government,” House Oversight Committee Chairman Steve Johnson, a Wayland Republican, said in a statement. He said an agreement ”signed in the dark for exorbitant sums of money is neither transparent nor honest.”

The GOP-controlled panel voted 6-3 along party lines to issue the subpoena.

“Robert is proud of his work during this unprecedented time and grateful to have served the governor and the state of Michigan. While Robert strongly believes that public officials should be able to receive confidential advice from their senior leaders, he will of course honor the subpoena and testify," spokesman Kenneth Baer said.

Republicans have criticized virus restrictions, which Whitmer and top public health officials have said are needed to save lives and prevent hospitals from being overrun.

Johnson cautioned committee members that the hearing “is not a moment for grandstanding” or “political gotcha questions. This is a moment to try to find answers."