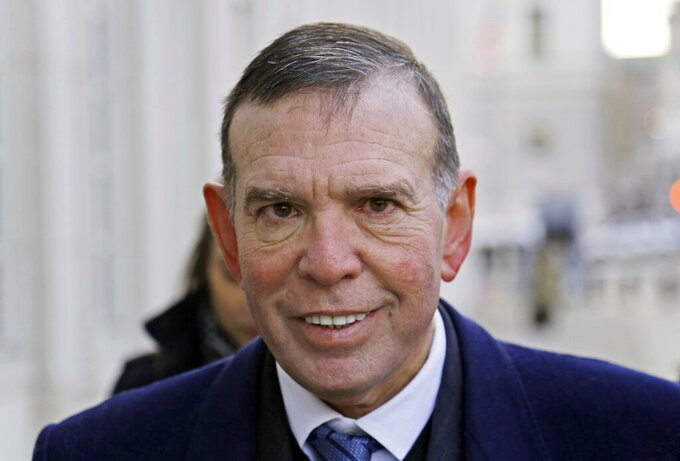 FILE - In this Dec. 13, 2017 file photo, Juan Angel Napout, of Paraguay, arrives to federal court in the Brooklyn borough of New York. A federal judge denied a request by the former head of South American soccer to be given compassionate release from prison because of the new coronavirus pandemic but reserved judgment Friday, April 10, 2020, on his request for release on bail pending his appeal. U.S. District Judge Pamela K. Chen in Brooklyn said Juan Ángel Napout had not exhausted his administrative remedies with the Federal Bureau of Prisons in seeking compassionate release.(AP Photo/Seth Wenig, File)

NEW YORK (AP) — A federal judge denied a request by the former head of South American soccer to be given compassionate release from prison because of the new coronavirus pandemic but reserved judgment Friday on his request for to be let out on bail pending his appeal.

Napout was convicted in December 2017 of accepting bribes, and his lawyers moved to reduce Napout’s sentence to time served or to let him to serve the next six months at his condominium in South Florida or for release until the appeal is decided.

“I am not going to be a fugitive, your honor,” he said near the end of an 85-minute telephone hearing. “I’m just asking you, your honor, for your mercy.”

His request for bail was opposed by federal prosecutors.

“The motivation and incentive to flee is at its peak now that Mr. Napout has been in for a time and sees what it’s like and would face the prospect of going back in should he lose his appeal,” Assistant U.S. Attorney Samuel P. Nitze said. He called Napout “a defendant of enormous means, zero ties to the United States, significant ties to his home country and to very powerful people in that home country, a demonstrated willingness to obstruct justice.”

Napout was convicted on Dec. 22, 2017, of one count of racketeering conspiracy and two counts of wire fraud conspiracy, and he was taken into custody that day.

He was sentenced by Chen to nine years in prison the following Aug. 29 and is at the low security Federal Correctional Institution, Miami. His attempt to overturn the verdict was argued on Nov. 7 at the 2nd Circuit U.S. Court of Appeals and is pending before Judges Robert D. Sack, Peter W. Hall and Joseph F. Bianco.

Napout filed a request for compassionate release with the Bureau of Prisons on March 30, and the bureau has 30 days to make a decision. His lawyers cited correlation between greater risk for more severe COVID-19 symptoms in older people. The government said no prisoner at the Miami facility had gotten ill, and Chen cited his being in the lower end of the 60-69 group.

“I don’t find his risk factors so significant in terms of the consequences of the disease if he gets it to warrant that,” she said.

Napout was banned for life from soccer by FIFA last September and fined 1 million Swiss francs (then $1.01 million). He has appealed to the Court of Arbitration for Sport, and a hearing is scheduled for May 13.

Chen agreed March 30 to release former Brazilian federation head José Maria Marin, who turns 88 on May 6, and cut short his four-year sentence by about eight months. He returned to Brazil within 72 hours of his release, prosecutors said.