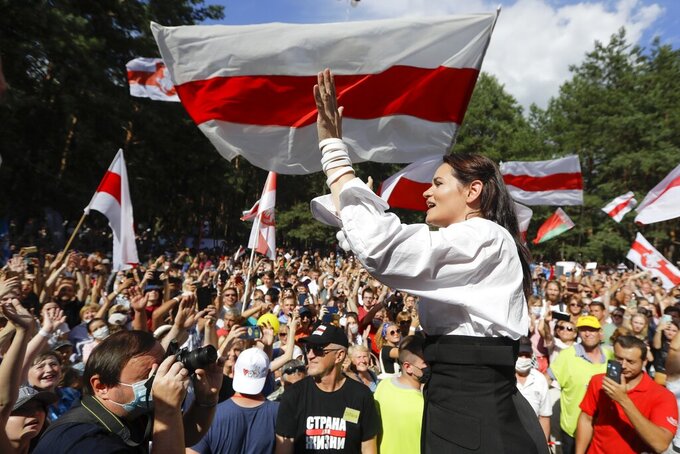 BREST, Belarus (AP) — A 37-year-old former English teacher without political experience seems an unlikely challenger to the authoritarian president of Belarus who has been the ex-Soviet nation's only leader for more than a quarter-century.

And yet, Sviatlana Tsikhanouskaya has united various opposition factions behind her candidacy and drawn tens of thousands of supporters to her campaign rallies ahead of the presidential election on Sunday.

Tsikhanouskaya says the crowds - the biggest demonstrations Belarus has seen since becoming independent in 1991 - reflect a desperate longing for transformation after President Alexander Lukashenko's 26-year rule.

In an interview with The Associated Press, she described herself as a “symbol of change.”

“People see me not as a consummate politician striving for power, but just an average person like themselves - and they like it,” Tsikhanouskaya said. “They understand that I don't want anything for myself."

Her rally a few days ago in Brest on the border with Poland drew over 20,000 people, a massive showing for a city that has never seen big political protests. A few days before that, Tsikhanouskaya's rally in the capital, Minsk, attracted more than 60,000. It was the largest opposition gathering in Belarus since the rallies in the months before the 1991 Soviet collapse.

Lukashenko, 65, was a Soviet state farm director before he became the first Belarusian president in 1994. Since then he has cracked down on dissent and independent media in the nation of 9.5 million, earning the nickname of “Europe's last dictator.”

But this time, Lukashenko appears to have lost his bravado and looks increasingly nervous in the face of the opposition rallies. More than 1,000 people have been detained for taking part in the protests since the campaign began.

Painful economic fallout from the coronavirus pandemic and the government's botched response to the outbreak has eroded Lukashenko's standing.

He had refused to introduce lockdown measures and dismissed the coronavirus as “psychosis” until he acknowledged last month that he had been infected but recovered quickly.

Tsikhanouskaya said Lukashenko's advice that Belarusians protect themselves against the virus with a daily shot of vodka was like “a spit in the face.”

She told the AP that the arrest this year of her husband, a popular opposition blogger who aspired to run for president himself, left her no choice but to enter politics.

“It was brewing inside for more than 20 years. We were afraid all that time and no one dared to say a word,” she said. “But if I could overcome my fear, everyone can.”

Her husband, Syarhei Tsikhanousky, has remained in jail since his arrest in May on charges of assailing a police officer. He has dismissed the charges as a provocation.

Last week, Belarusian authorities opened a new probe against Tsikhanouskaya's husband on charges of planning to stage “mass riots” with 33 Russian private security contractors arrested on Wednesday. Russia has rejected the charges, saying the men were en route to another country.

Tsikhanouskaya dismissed the accusations against her husband as a sham. “He has no relation to that, and people realize it,” she said.

If she wins, Tsikhanouskaya said, she will free all political prisoners, order a constitutional referendum that would limit the number of presidential terms and introduce other democratic changes. She vowed to step down after six months to hold a new, free presidential vote.

She also said she will move to do away with a union treaty envisaging close economic, political and military ties with Russia. Many in the Belarusian opposition see the union as a threat to the country's independence.

Lukashenko has relied on Russian subsidies and loans to keep Belarus' Soviet-era economy afloat. He denounced a hike in Russian energy prices this year as part of the Kremlin's pressure on Belarus to abandon its independence and pointed at the arrest of the 33 Russian security contractors as a sign of Moscow's subversive plans.

Western observers have described previous presidential elections in Belarus as rigged to keep Lukashenko in office.

Tsikhanouskaya has emerged as the rallying figure for the opposition after election officials refused to register for the ballot two other potential candidates who were seen as Lukashenko's strongest potential challengers.

One, Viktor Babariko, the head of a major Russia-controlled bank, was jailed in May on money-laundering and tax-evasion charges that he rejected as politically driven. Another, Valery Tsepkalo, fled to Russia with his children last month after receiving a tip that his arrest was imminent and the authorities were prepared to strip him of parental rights.

Tsikhanouskaya has teamed up with Tsepkalo's wife, who stayed in Belarus, and Babariko's campaign manager to run an energetic campaign. Three other contenders on the ballot are widely seen as token candidates.

Tsikhanouskaya said she had to send her 10-year-old son and 5-year-old daughter to a European country she wouldn’t name after receiving threats.

“I got a phone call: 'We will put you behind bars and place your children in an orphanage,"" she said. “I was hesitating and on the verge of stepping down.”

She said it was a tormenting decision. “But I made that choice” to keep running, she said. “There must be a symbol of freedom.”