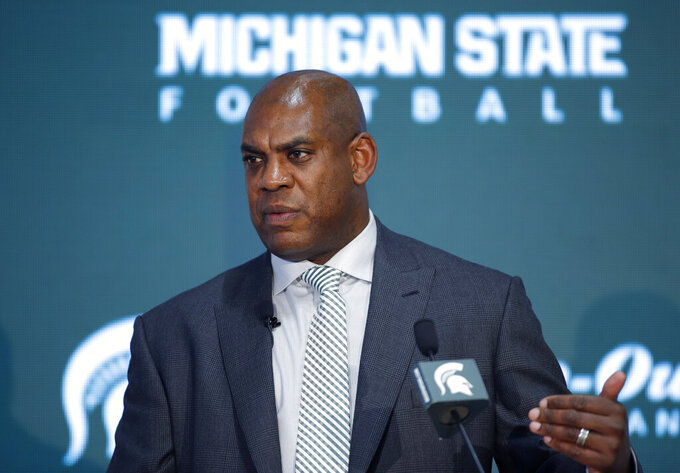 Mel Tucker got a late start at Michigan State. Mark Dantonio's retirement didn't come until February, and Tucker was hired as the new coach shortly after that.

Then Tucker had about a month of normalcy before the coronavirus pandemic made his transition period even harder.

“I didn't know what Zoom was before COVID, and I think we’ve become Zoom experts,” Tucker said earlier this offseason. “Initially, all of our contact was electronic. It was Zoom, FaceTime, text, phone calls, maybe hopping on a video game with a guy and talking with him through a headset, that was how we connected with our players. And that was quite a challenge, but it was a lot of fun."

Now Tucker can work with his players in person, and although the circumstances in his first year as coach have been less than ideal, the program won't be burdened by huge expectations. The last few seasons under Dantonio were difficult, and Michigan State appeared to be in a rebuilding mode well before the virus interfered with this past offseason.

Dantonio won three Big Ten titles at Michigan State and brought the Spartans to heights they hadn't reached in decades, but in his final four seasons the team went just 17-19 in Big Ten play. Last year, Michigan State was 7-6 overall, but the Spartans were blown out by Ohio State (34-10), Wisconsin (38-0), Penn State (28-7) and Michigan (44-10).

Now Michigan State must replace NFL draft picks Kenny Willekes and Josiah Scott. It feels like the Spartans' playoff appearance in 2015 was a long time ago.

That did not prevent Michigan State from landing a coach with Power Five experience, however. Tucker coached Colorado for one season before taking over the Spartans.

“We’re very process driven, and it’s unfolding right before our eyes, and we’re working hard at it every day to cement our culture, continue to drive home our process,” Tucker said recently. “But I do see a significant buy-in from our players in terms of what we’re asking them to do, and that is very, very positive.”

The Spartans have to replace Brian Lewerke at quarterback. Rocky Lombardi and Theo Day return at that position, but they combined for only 24 pass attempts last season. Tucker said early this month that the team was still in “competition mode” at quarterback.

Michigan State's best stretch under Dantonio came on the strength of an aggressive defense that was tough to run on. Last year, the Spartans ranked in the middle of the pack in the Big Ten in total defense, and although defensive lineman Jacub Panasiuk's return should help, the defensive group coming back is an inexperienced one.

Michigan State went through significant injury problems on the offensive line last season, but Elijah Collins still managed to rush for nearly 1,000 yards. He could take some of the pressure off whoever is at quarterback.

The team went into quarantine in July after positive tests, and in early August, Panasiuk announced he was redshirting the season because of COVID-19 concerns. But Panasiuk eventually decided to come back, and he should be a key player after producing five sacks a season ago.

“It made us better coaches when he came back,” defensive coordinator Scottie Hazelton said. “I mean, that’s what you want, a guy who can rush the passer and do some things, and provide a little leadership.”

Offensive lineman Jordan Reid announced in August that he was opting out, and Tucker said recently that had not changed.

Tucker opens the season against the Big Ten's other new coach, Greg Schiano of Rutgers — although Schiano had a successful stint as the Rutgers coach previously before spending time in the NFL and at Ohio State. The Spartans host the Scarlet Knights on Oct. 24, then take on Michigan on the road the following weekend in that big in-state rivalry.

Michigan State was supposed to have a marquee home game against Miami this year, but that obviously isn't happening now that the Big Ten is only playing conference games.