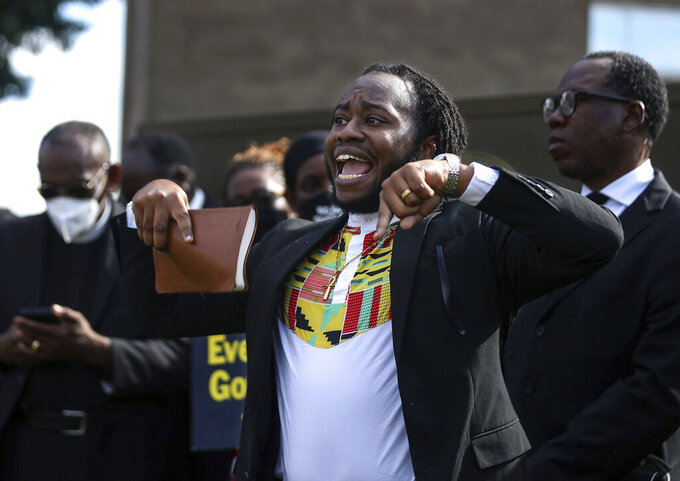 Pastor DiArron M. speaks during a vigil for Pervis Payne outside of the Shelby County Criminal Justice Center on Friday, June 4, 2021 in Memphis. A hearing is scheduled Friday in the case of Payne, a Tennessee death row inmate who has long maintained his innocence and whose lawyers filed a petition saying he is intellectually disabled and should not be executed. (Patrick Lantrip/Daily Memphian via AP)

MEMPHIS, Tenn. (AP) — An expert hired by a state prosecutors' office can conduct a mental evaluation of a Tennessee death row inmate who claims he is intellectually disabled and should not be executed for the slayings of a mother and daughter more than 30 years ago, a judge ruled Friday.

Payne's case has drawn national attention from anti-death penalty activists and includes the involvement of the Innocence Project, which argues for the use of DNA testing in cases claiming wrongful conviction. A group of Payne's supporters, including his father and sister, held a prayer vigil before Friday's hearing in Memphis.

Shelby County judge Paula Skahan ruled Payne attorney Kelley Henry had made a legitimate claim for relief under the new law. The judge and Henry agreed with the Shelby County district attorney's office's request to hire an expert to evaluate him. Prosecutor Steve Jones said the expert is in the process of being hired.

The judge wrote in her ruling that she is “mindful of the parties' due process rights and the seriousness of this issue.”

Executions of the mentally disabled were ruled unconstitutional in 2002, when the U.S. Supreme Court found they violate the Eighth Amendment’s ban on cruel and unusual punishment. But until the new law was passed, Tennessee had no mechanism for an inmate to reopen his case in order to press a claim of intellectual disability.

Payne was sentenced to death in a Memphis court for the 1987 stabbing deaths of Charisse Christopher and her 2-year-old daughter, Lacie Jo. Christopher’s son, Nicholas, who was 3 at the time, also was stabbed but survived.

Payne, who is Black, has always claimed innocence. He told police he was at Christopher’s apartment building to meet his girlfriend when he heard the victims, who were white, and tried to help them. He said he panicked when he saw a white policeman and ran away.

Payne’s case was still under appeal when the Supreme Court ruled that it was unconstitutional to execute the intellectually disabled, but he didn’t claim a disability until after his appeals were exhausted. That involved reopening his case and required a change in state law.

No intellectual disability hearing in Payne's case has ever been held.

Last year, Skahan allowed DNA testing in Payne’s case for the first time. His DNA was found on the hilt of the knife used in the killings, which matches his trial testimony that he cut himself while handling the knife as he tried to help the victims, Henry told the court at a January hearing.

Payne’s DNA was not found on the handle, although partial DNA evidence from an unknown man was. However, there was not enough DNA material to enter it into a national FBI database and attempt to match it to someone else, Henry said. Scrapings from Christopher’s fingernails, collected from the crime scene, could not be located for testing.

Shelby County district attorney Amy Weirich fought the DNA tests. She has said that the evidence overwhelmingly points to Payne as the killer and her office is contesting the intellectual disablity claims.