EXPLAINER: 5 key takeaways from the May jobs report 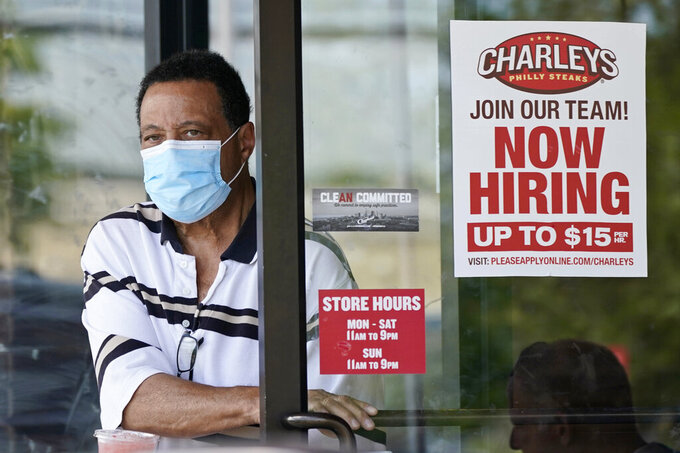 A patron leaves Charleys Philly Steaks restaurant, Friday, June 4, 2021, in Mayfield Heights, Ohio. Hiring in the United States picked up in May yet was slowed again by the struggles of many companies to find enough workers to keep up with the economy's swift recovery from the pandemic recession. U.S. employers added 559,000 jobs last month, the Labor Department said Friday, an improvement from April's sluggish increase of 278,000. (AP Photo/Tony Dejak)

WASHINGTON (AP) — The American job market is in an odd place.

Consider that in May, employers added 559,000 jobs. In ordinary times, that would amount to a blockbuster burst of hiring for one month, and the response would be an outpouring of cheers.

These are not ordinary times. In the wake of a violent recession that paralyzed the economy and triggered tens of millions of layoffs, the nation still remains 7.6 million jobs short of the number it had in February 2020, just before viral pandemic erupted. So the government’s May jobs report Friday registered as a mild disappointment, coming after an even weaker month in April.

In one sense, the modest pace of hiring is surprising: The economic rebound is accelerating, and the need for workers is surging. COVID-19 is quickly receding in the United States — new cases are way down to an average of just over 16,000 a day, from 250,000 in early January — as more Americans are vaccinated.

Yet economists note that the economy is in an awkward place: It's recovering from a devastating crisis almost as fast as it had succumbed to it. In fact, the very speed of the rebound helps explain why job growth remains modest. Businesses are reopening as fast as they can to meet the pent-up demand by consumers to shop, travel, dine out and attend sporting and other entertainment events. As they encounter that surging customer demand, they are struggling to find enough workers and supplies as fast as they need them.

Over the next few months, economists expect the labor shortage — and the bottlenecks in supply chains that have contributed to it — to lift and eventually clear the way for more robust job growth.

“The details of the report again showed a clear impact from labor supply constraints, and we continue to expect stronger job gains later this year,” Jan Hatzius, chief economist at Goldman Sachs, said in a research note.

Here are five takeaways from the May jobs report:

The monthly job numbers have been bouncing around as the economy navigates a bumpy transition from COVID-19 lockdown to boom times. During this transitional period, economists caution against trying to predict hiring patterns from month to month.

“All these employers put up help-wanted signs at the same time," noted Mark Zandi, chief economist at Moody’s Analytics. “It’s taking a few weeks for workers to take the jobs.’’

BACK TO THE OFFICE

As the coronavirus has receded and the economy has reopened, work-from-home Americans have been trickling back to their traditional workplaces. The proportion of job holders who said they teleworked from home declined in May to 16.6% last month from 18.3% in April, extending a sharp drop from 35.4% a year earlier. (The figures include people who worked at home some time during the previous four weeks because of the pandemic.)

Leslie Preston, a senior economist at TD Economics, called the decline in teleworking “another sign that work life is gradually returning to normal.’’

In another signal of encroaching normality, the number of people who said they had decided not to seek work because of the pandemic dropped to 2.5 million last month from 2.8 million in April.

Average hourly earnings rose by a healthy 0.5% in May, on top of a 0.7% increase in April. Last month's wage growth was especially impressive considering that 52% of the added jobs came from the traditionally low-wage leisure and hospitality sector. What that means is that many of these workers are earning higher wages from employers desperate to attract or keep them. Many large chains, including Amazon, Walmart, Costco and Chipotle have begun raising pay.

For nonsupervisory workers in leisure and hospitality — including restaurants and hotel employees — hourly wages rose 1.2% last month from April and 8.8% from a year ago.

Likewise, rank-and-file construction workers, benefiting from a housing boom, enjoyed a 4.4% wage increase in May compared with a year earlier. And amid a surge in online shopping and deliveries, transportation and warehouse workers received an average 3.5% hourly wage increase over the previous 12 months.

PROGRESS FOR THE JOBLESS

For months, employers have been recalling workers they had temporarily laid off after the pandemic hit and forced them to close or scale back their operations. In May, the number of Americans on temporary layoff dropped by an additional 291,000 to 1.8 million — down 90% from a staggering 18 million in April 2020.

Even people who lost their old jobs permanently made progress last month: The number of such people dropped by 295,000 in May to 3.2 million. But that is still up 59% from 2 million in April 2020. Nearly 3.8 million Americans — about 41% of the jobless — have been out of work for six months or more.

FALLING UNEMPLOYMENT FOR PEOPLE OF COLOR

The jobless rates for Black and Hispanic Americans fell sharply last month: 9.1% of Black workers were unemployed in May, down from 9.7% in April. And 7.3% of Hispanics reported being out of work, compared with 7.9% in April. Like the overall U.S. unemployment rate, those figures represented the lowest such jobless figures since March 2020.

Still, Black and Hispanic unemployment remains well above the rate of joblessness for white Americans, which was 5.1% in May, down from 5.3% in April.