EXPLAINER: How India is changing vaccine plan amid shortages 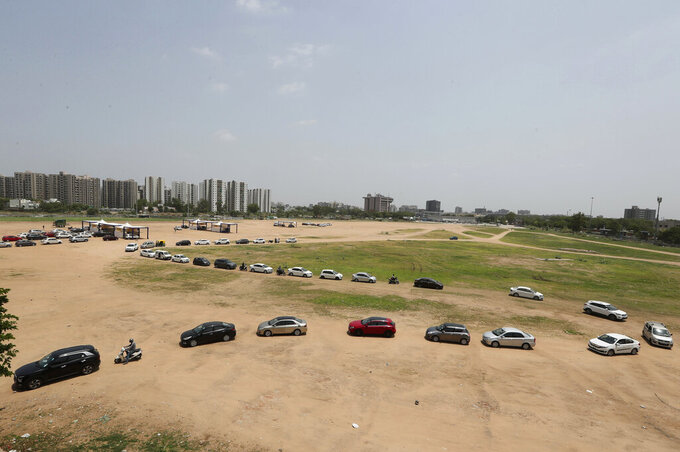 FILE - In this May 28, 2021, file photo, motorists line up to receive Covishield, the Oxford-AstraZeneca vaccine for COVID-19 at a drive-in vaccination facility in Ahmedabad, India. Starting June 21, 2021, every Indian adult can get a COVID-19 vaccine dose for free that was purchased by the federal government. The policy reversal announced last week ends a complex system of buying vaccines that worsened inequities in accessing vaccines. India is a key global supplier of vaccines and its missteps have left millions of people waiting unprotected. The policy change is likely to address inequality but questions remain and shortages will continue. (AP Photo/Ajit Solanki, File)

NEW DELHI (AP) — Starting Monday, every adult in India will be eligible for a free vaccine paid for by the federal government.

The new policy, announced by Prime Minister Narendra Modi last week, ends a complex system introduced just last month of buying and distributing vaccines that overburdened states and led to inequities in how the shots were handed out.

India is a key supplier of vaccines around the world, and its missteps at home have led it to stop exports of shots, leaving millions of people around the world waiting unprotected. Only about 3.5% of Indians are fully vaccinated and while supporters hope the policy change will make vaccine distribution more equitable, poor planning means shortages will continue.

Here's a look at the changes to India's vaccine policy and what they mean.

India has vast experience in running large immunization programs, and each year it distributes 300 million shots to infants and mothers for free. For these programs, the federal government is in charge of buying the vaccines and then works with the states to figure out how best to distribute them.

But the scale of the COVID-19 vaccination campaign is unprecedented. And a massive surge in March pushed India's health system to the breaking point. As hundreds of thousands of people became infected each day and hospitals overflowed with patients gasping for air, the states complained they weren’t getting enough shots from the federal government and clamored for more control over how the vaccines were distributed.

So, starting in May, the federal government agreed to buy just half of all vaccines produced for use in India and continued to give them out for free to health care and frontline workers and those over 45. The other half became available for states and private hospitals to buy directly. These vaccines were destined for people between 18 and 45; they were free if obtained from the states, but cost money if obtained privately.

WHY IT DIDN'T WORK

The states had never bought vaccines before and a limited supply meant they were competing with one another as well as with private hospitals. They were forced to pay higher prices than the federal government could have negotiated, said Dr. Chandrakant Lahariya, a health policy expert.

“That essentially makes it inefficient,” he said.

Private hospitals passed that cost on to people, and amid shortages at government centers, people had to either pay for a vaccine, or not get a shot.

The change in policy also expanded eligibility to all adults. Expanding the criteria despite shortages meant shots weren't always going to the groups the federal government initially said it would prioritize: those with essential jobs and the elderly. Since May, more people younger than 45 have received their first shot than those older than 60. More than 74 million people over 60 remain unvaccinated.

Modi said these decisions were taken to satisfy the states' demands, but the fractured response may have cost lives, said Dr. Vineeta Bal, who studies immune systems at the Indian Institute of Science Education and Research in Pune city.

WHAT HAS CHANGED NOW?

The federal government has now decided to buy a larger portion of vaccines — but it's still not returning fully to its original policy. It will buy 75% of all vaccines made for use in India and likely renegotiate prices. These shots will be given to states and will continue to be distributed for free. Private hospitals can buy the remaining 25% at prices that have been capped and can charge for them.

States will receive vaccines based on their populations, disease burdens and how many people have been vaccinated. They will be penalized for wasting doses.

But supply remains a challenge. Delhi Chief Minister Arvind Kejriwal said: “Where will the vaccines come from is a big question.”

India has placed orders for vaccines still in development, but for the moment it will continue to rely on existing, overstretched suppliers like the Serum Institute of India.