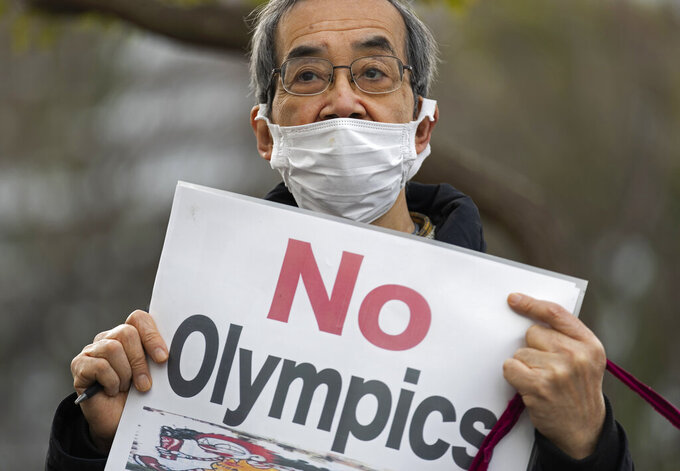 A demonstrator holds a placard protesting the planned Tokyo 2020 Olympic games near a building where Yoshiro Mori was meeting to announce his resignation as the president of the Tokyo Olympic organizing committee in Tokyo on Friday, Feb. 12, 2021. Mori resigned Friday, following sexist comments implying women talk too much. (AP Photo/Hiro Komae)

TOKYO (AP) — Japan's latest Olympic controversy — the reluctant resignation of Japanese organizing committee head Yoshiro Mori over sexist comments — comes as its citizens are increasingly expressing wariness and opposition over Tokyo's hosting of the delayed games as people continue to die from the pandemic around the globe. The Olympics are facing mounting uncertainties, including the state of the virus in Japan, shaky Japanese support for the games and growing demands for gender equality and diversity in a country where men still dominate politics and business.

Q: What did Mori say?

A: Mori, in a Feb. 3 online Japanese Olympic Committee meeting, said “meetings with many women take a long time" because “Women are competitive. When one of them raises her hand, others probably think they have to talk too and everyone says something.” He said the women attending that meeting were “sensible to know their place." His comments came after he was asked about the small number of females on the JOC board compared to a 40% target. Mori said he had heard comments that increasing the number of women would be a problem unless time limits are put in place. He was interpreted as trying to bar women who speak up against those in power.

Q: Did he apologize?

A: Mori was forced to retract his remarks and apologize the next day after the comments were widely reported, but the gaffe-prone former prime minister refused to resign. His blunt attitude at a news conference meant for damage control fueled public outrage. He continued to face pressure from opposition lawmakers, activists and Olympic sponsors. Prime Minister Yoshihide Suga criticized Mori, but the response of his government and ruling party officials was seen as too soft. Hundreds of Olympic volunteers and at least two torch bearers resigned, and an online petition calling for Mori's resignation drew 150,000 signatures.

Q: What does his resignation mean for Japanese gender equality?

A: Mori, despite his apology and initial government and Japanese Olympic Committee attempts to wrap the incident up quickly, was forced to resign because of public opinion, a rare development in Japan, experts say. “I think (Mori's resignation) was possible because it was about the Olympics, a high-profile event that gets global attention,” said Mari Miura, a professor of gender and politics at Sophia University in Tokyo. Japan is ranked among the lowest nations in gender equality, but there has been growing awareness and public discussion of the issue in recent years after the #MeToo movement started abroad. Many now see that speaking up against Mori made a difference, and his example is likely to set a new standard for business and politics, Miura said. “I think it was empowering for civil society ... and contributed to democracy in Japan.”

Q: How do people feel about Japan's push to hold the Olympics?

A: Prime Minister Suga has repeatedly expressed his determination to host the Olympics as “proof of human victory against the pandemic." But media surveys show about 80% of Japanese want the games canceled or postponed further. Many people say the huge costs of the event should go instead to antivirus measures and to help with the continuing recovery from a massive 2011 earthquake, tsunami and nuclear disaster. Many Japanese, especially those in the disaster area, have been turned off by an extremely costly and commercialized Olympics.

Q: How is Japan handling the pandemic?

A: Japan is under a partial state of emergency covering Tokyo and nine other urban prefectures which has been extended through March 7. Vaccines are considered key to holding the Olympics this summer, but inoculations are not starting until next week — two months behind many European countries and the U.S. With priority given to front-line medical experts and elderly people, the general public won't have their turn until around June, meaning that so-called herd immunity would be impossible before the games. Japan's initial reliance on foreign-developed vaccines largely imported from Europe is also causing uncertainty over supplies. Japan has recorded 411,751 coronavirus cases, including 6,774 deaths, as of Thursday.