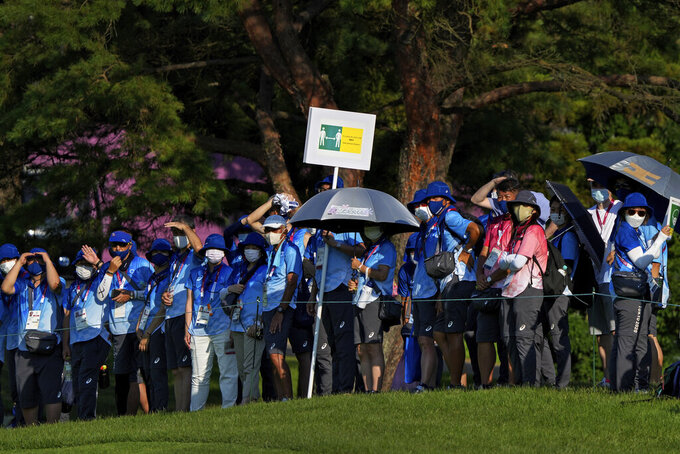 Volunteers wearing face masks to help curb the spread of the coronavirus hold a social distancing sign as they gather in-line to watch the final round of the men's golf event at the 2020 Summer Olympics on Sunday, Aug. 1, 2021, in Kawagoe, Japan. Japan is playing host to the Tokyo Olympics. But the capital, as well as other populous areas, are in the middle of a government-declared "state of emergency" to curb surging COVID-19 infections. (AP Photo/Andy Wong)

TOKYO (AP) — Japan is playing host to the Tokyo Olympics. But the capital, as well as other populous areas, are in the middle of a government-declared “state of emergency” to curb surging COVID-19 infections. What does that state of emergency mean? How is it enforced? We break it down here.

HOW LONG HAS THIS STATE OF EMERGENCY BEEN GOING ON?

Japan is now in its fourth state of emergency. Tokyo has been in that state much of this year. People are getting resigned to it, no longer alarmed by a situation that’s “critically urgent,” which is how the Japanese term translates, but accepting it as a new normal. So even as the nation celebrates medal winners, blaring ambulance sirens can be heard regularly. Tokyo has been racking up record daily cases, totaling several thousand, tripling since the Olympics opened July 23. Experts say that could reach 10,000 people in a couple of weeks.

WHAT IS THIS STATE OF EMERGENCY — OR WHAT ISN'T IT?

One thing it's not is a lockdown. Restaurants and bars are asked to close early and can’t serve alcohol. The idea is that people who consume alcohol and are influenced by it talk in loud voices, and that spreads infections. But some medical experts say that’s unfairly targeting eateries when airborne variants can spread anywhere.

The states of emergency have varied slightly, with earlier ones not banning alcohol. Last year, schools were closed temporarily. The regions affected have also differed. Other areas have periodically been under a less stringent measure.

IS IT REALLY WORKING?

Some would say not. Tokyo’s streets are bustling with people, commuter trains are packed and, despite government-mandated requests for people to work from home, salarymen and salarywomen say their bosses demand they come into the office.

WHAT HAS IT MEANT FOR THE OLYMPICS?

The events are being held without spectators, although the stands aren’t totally empty because team and Olympic officials, as well as reporters, are there. Athletes are tested daily for COVID-19, and others involved with the Games are also regularly tested. Those tests are free. That’s in contrast to the general public, for whom such tests have been hard to get and cost hundreds of dollars each.

The Olympic “bubble” hasn’t been perfect, with about 30 people, almost all non-athlete Japanese workers, testing positive a day. Taisuke Nakata, a University of Tokyo professor who has been studying the effects of the emergency measures on the economy, says that number is insignificant compared to the movement of 126 million Japanese people and how that potentially spreads infections. Nakata believes people’s actions may finally change if the cases keep surging, but he isn’t sure.

Japan has among the slowest vaccine rollouts in the developed world, with about a third of the adult population now fully vaccinated. Although the elderly get priority, people have complained that signing up for the shots, by phone or online, has been frustrating, like winning coveted concert tickets with slots getting filled almost as soon as they open.

One may think Japan, home to the likes of Toyota Motor Corp. and Sony Corp., would be a production powerhouse. But it’s totally dependent on imported vaccines. A Made in Japan vaccine likely won’t arrive until next year, perhaps 2023. Critics say strict drug approval regulations, especially for vaccines, prevent speedy decision-making. The problem is also about the money. Former President Donald Trump’s Project Warp Speed totaled $2 billion. Japan has earmarked some 50 billion yen ($500 million) toward vaccine development.

Philippe Fauchet, who has two decades of experience in the pharmaceutical industry in Japan, serving as head of GlaxoSmithKline and Sanofi-Aventis, says the nation’s conservative risk-averse “insular culture” hurt its response to the pandemic.

Although Japan tends to be an orderly and conformist place, protesters have taken to the streets to oppose the Olympics. They say gathering tens of thousands of people from all over the world sends the wrong message during a pandemic about valuing human life. Dissatisfaction with the political leadership lies deep, with support ratings for Prime Minister Yoshihide Suga nose-diving. The sentiment among regular Japanese, apparent in the quiet defiance of those revelers crowding Tokyo bars in the middle of an emergency, might go something like this: If you’re risking your health to go to work anyway, why not party a little?