EXPLAINER: What US ending Saudi war support means for Yemen 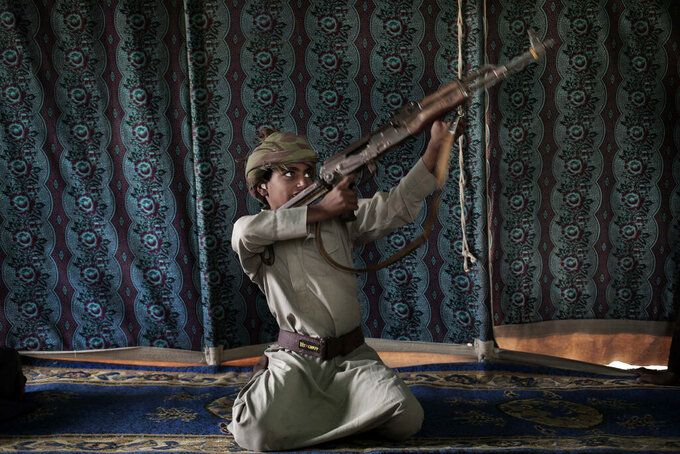 FILE - In this July 27, 2018, file photo, Kahlan, a 12-year-old former child soldier with Yemen's Houthi rebels, demonstrates how to use a weapon at a camp for displaced persons where he took shelter with his family in Marib, Yemen. President Joe Biden's announcement that the U.S. will end its support of a Saudi-led coalition's years-long war against Yemen's Houthi rebels likely will increase pressure on the kingdom to end its campaign there, though reaching an enduring peace for the Arab world's poorest country still remains in question. (AP Photo/Nariman El-Mofty, File)

DUBAI, United Arab Emirates (AP) — President Joe Biden's announcement that the U.S. will end its support of a Saudi-led coalition's yearslong war against Yemen's Houthi rebels likely will increase pressure on the kingdom to end its campaign there. However, reaching an enduring peace for the Arab world's poorest country still remains in question.

The Iran-backed rebels remain firmly entrenched in the country's north and hold its capital, Sanaa. The rest of the country is being held by competing tribal, regional and political alliances, backed overall by the Saudi-led coalition that's been fighting there since 2015.

How those fractious forces respond will be key as the United Nations, the West and regional countries try to find a power-sharing political arrangement agreeable to all sides. Yemen's long-troubled modern history suggests any deal will be difficult to reach and perhaps even harder to stick to.

WHO IS FIGHTING IN YEMEN AND WHY HAS IT BEEN SO BLOODY?

Yemen’s war began in September 2014, when the Houthis seized Sanaa and began a march south to try to seize the entire country. Saudi Arabia, along with the United Arab Emirates and other countries, entered the war alongside Yemen’s internationally recognized government in March 2015.

The war has killed some 130,000 people, including over 13,000 civilians slain in targeted attacks, according to the Armed Conflict Location & Event Project. The aid group Save the Children estimates that 85,000 children under age 5 have died from starvation or disease since the war began. Meanwhile, the coronavirus pandemic rages unchecked as Yemen's health care system has been decimated by the war and the Houthis suppressed information about the crisis.

WHY IS YEMEN AT WAR?

Situated along the southern tip of the Arabian Peninsula, Yemen had been split in the Cold War between a Marxist south and a northern republic. The two nations became a unified Yemen in 1990, fought a civil war in 1994 and later came under the rule of Ali Abdullah Saleh, a strongman who once described governing his nation's myriad of tribal groups, militant groups and alliances as “dancing on the heads of snakes.”

Saleh began losing his grip on power during the Arab Spring protests a decade ago. He ultimately agreed to have his vice president, Abed Rabbo Mansour Hadi, take over. Hadi's government struggled and Saleh, seeing a second chance to regain power, had his forces side with the same Houthis he had battled as president as they swept into the capital in 2014. Saleh ultimately switched sides again to back Hadi but his luck had run out — the Houthis killed him in 2017.

Iran, seeing the opportunity to aid a war of attrition against rival Saudi Arabia, has backed the Houthis. Arab countries, the West and United Nations experts say Iran has armed the Houthis with everything from assault rifles to ballistic missiles, something long denied by Tehran despite evidence to the contrary. Saudi Arabia and its Gulf Arab allies fear the Houthis could grow as powerful as Lebanon's Shiite Hezbollah militant group. The Houthis already launched drone and missile attacks deep into the kingdom.

All the while, Yemen's endemic poverty, lack of water and other resources have worsened. The war merely compounded the misery, and this country of 29 million people is now on the brink of famine.

WHY IS THE U.S. INVOLVED?

There's another conflict hidden inside Yemen's war that directly involves the U.S. America has been targeting members of al-Qaida in the Arabian Peninsula, considered by Washington to be the most-dangerous franchise of the militant group that carried out the Sept. 11 attacks. In 2000, al-Qaida militants attacked the USS Cole off Yemen's port city of Aden, killing 17 American sailors.

Every U.S. president since George W. Bush has conducted drone strikes in Yemen, killing over 1,300 people, including at least 115 civilians, according to the Washington-based organization New America. U.S. forces had been operating in Yemen under Saleh and later left. American special forces troops have deployed in the country in the time since, including a raid early in President Donald Trump's administration that killed a Navy SEAL, al-Qaida militants and civilians.

Meanwhile, the U.S. sold bombs and fighter jets to Saudi Arabia that the kingdom later used in strikes on Yemen that also killed civilians. The Obama administration in 2015 initially offered U.S. targeting assistance to Saudi Arabia’s command-and-control that was supposed to minimize civilian casualties in airstrikes. It didn’t, and Obama ultimately cut back on the program. Under Trump, that assistance continued although his administration later stopped U.S. refueling operations for Saudi jets.

America also has deployed U.S. troops to Saudi Arabia after it came under a drone-and-missile attack in 2019 that temporarily halved its oil output. While the Houthis claimed the attack, the kingdom, the U.S. and U.N. experts believe Iran carried out the attack. Biden made a point to say the U.S. would “continue to support and help Saudi Arabia defend its sovereignty and its territorial integrity and its people.”

WILL THIS END THE WAR?

Biden's announcement appeared designed to put new pressure on Saudi Arabia to end its coalition campaign there. The UAE pulled out its ground forces in 2019 and has been urging a negotiated settlement to the war. Saudi Prince Khalid bin Salman, a deputy defense minister and son of King Salman, wrote on Twitter the kingdom wants to work toward “implementing a sustainable political settlement” in Yemen. The war has been a costly, bloody stalemate for his father, as well as his brother Crown Prince Mohammed bin Salman.

However, previous U.N.-led efforts have yet to end the conflict. Meanwhile, secessionists allied to the UAE have openly battled other troops allied to the coalition. Any peace between the Saudi-led coalition and the Houthis may only see the country divided again in the future.