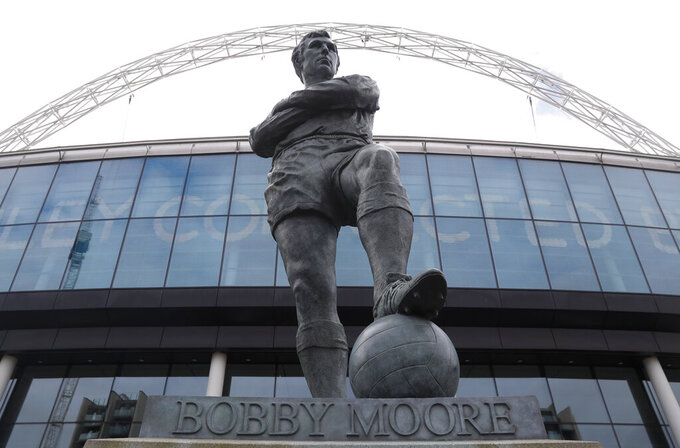 The pandemic-delayed FA Cup final will be named after a mental health initiative spearheaded by Prince William.

The second-in-line to the British throne is concerned about the psychological challenges stemming from the coronavirus outbreak, which has killed more than 40,000 in Britain and seen many people having to isolate for months.

William announced during a video call with the Arsenal squad that the Aug. 1 finale to the English season at Wembley Stadium would be known as the “Heads Up FA Cup final” rather than having the sponsorship of Emirates airline in the title.

“We’re going to really use the final as a moment to promote good, positive mental health for everyone,” the prince said. “It’s quite timely bearing in mind what we’ve all been through with this pandemic.

"I think there’s going to be, sadly, a lot of repercussions from this in society, not just in football, in terms of people’s mental health. Hopefully the FA Cup can be a bit of a pivot that people can rally around.”

The cup final was due to be played in May but the competition was suspended as sport was shut down in England in March to prevent COVID-19 spreading.

It was Arsenal manager Mikel Arteta contracting the virus that led to the Premier League being put on hold. The season is due to resume on Wednesday after 100 days without games.

Arteta has been aware of the need to discuss mental well being with his players, who were unable to go train as a team for more than two months.

“You have to create a safe environment for them to be able to talk to you directly without feeling judged or (worrying) whether that’s going to have consequences for them, whether they’re going to play or not, or my feelings towards them," Arteta said. “This is what I’ve been trying to do over the last 12 weeks, by trying to talk individually so they can raise those feelings, their issues."

William recently appeared in a television documentary showing how his Heads Up initiative is raising awareness about mental health in soccer and encouraging supporters to discuss their problems.

“After several difficult months for many throughout the country, mental health well being is more important than ever," English Football Association chief executive Mark Bullingham said. "Renaming the FA Cup in this way, with millions around the world watching, is our way to help stimulate this discussion.”

Arsenal plays Sheffield United in the quarterfinals on June 28.

Rob Harris is at https://www.twitter.com/RobHarris