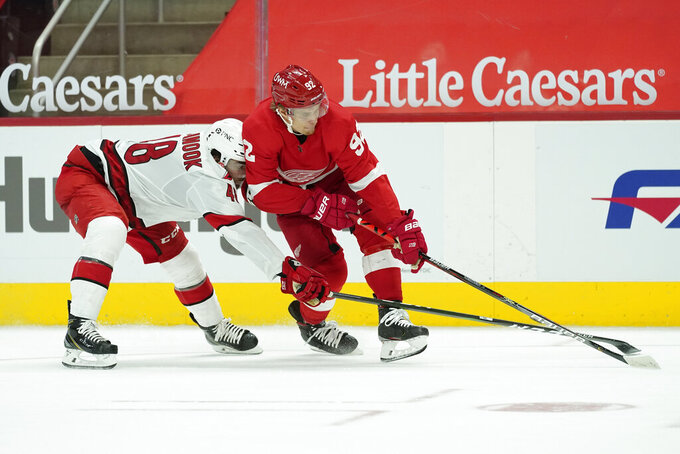 DETROIT (AP) — Robby Fabbri scored the tiebreaking goal with 2:42 left in the third period, Dylan Larkin got his second goal into an empty net and the Detroit Red Wings beat the Carolina Hurricanes 4-2 on Saturday night.

“They’ve got a deep D core over there, but they looked tired out by the end," Larkin said. “We really ground them down."

Fabbri fluttered the puck past Petr Mrazek from the front of the crease off a pass from Filip Zadina behind the net. Zadina also set up Bobby Ryan to score in his Red Wings debut, breaking a scoreless tie early in the second period, after the veteran forward missed the opener with an injury.

“We’ve been skating with (Ryan) for months, so we know what we can do," Larkin said. “It was huge for the whole hockey team for him to get that one.

“He wanted to come here and you could see how fired up he was to put on the jersey."

Larkin scored a tiebreaking goal early in the third just 18 seconds after Carolina went ahead. Detroit's Jonathan Bernier finished with 29 saves in his season debut.

“I thought we were deeper as a team," coach Jeff Blashill said. “We had four lines and six D going. Bobby really helps us with depth scoring."

Vincent Trocheck pulled the Hurricanes into a tie on a power play early in the third and Andrei Svechnikov made it 2-all midway through the final period. Carolina could not tie the game a third time to extend its chances to win.

“If we compete like we did in Game 1, we have a chance every night," Trocheck said. “Tonight, they wanted it more.”

Mrazek had 17 saves after needing to stop just 14 shots to shut out the team that drafted him in the season-opening game for both teams Thursday night.

“You don’t want to make excuses, but (Friday) hurt us," coach Rod Brind’Amour said. “We sat around. Sitting in the hotel and not getting around, that’s part of why we started slow. I’ve got to do a better job of figuring that out.”

Carolina was without center Jordan Staal, who played in the opener, due to the NHL's COVID-19 protocols.

“That’s what it looks like when he’s out of our lineup," Brind’Amour said. “It’s a huge loss. He’s very, very valuable for us.”

The Hurricanes recalled center Morgan Geekie from the taxi squad and he had three shots against Detroit in his third NHL game.

Ryan signed a one-year deal with the Red Wings, shooting to revive his career. He missed more than two months of last season after entering the NHL/NHLPA players assistance program in November, 2019. Upon his return in February, he shared his story publicly in hopes of inspiring others facing similar challenges.

“Any of those guys who go through tough times and bounce back, you’re always rooting for them," Brind’Amour said.

Detroit defenseman Filip Hronek stood in net and stopped a shot in the first period after Bernier was out of position after making a save. The Red Wings blocked seven shots and Bernier had eight saves in the opening period, keeping the game scoreless even though Carolina controlled the puck and the play.

The Hurricanes started Mrazek for a second straight game and likely will want to work James Reimer in soon to help him get sharp early in the delayed season.