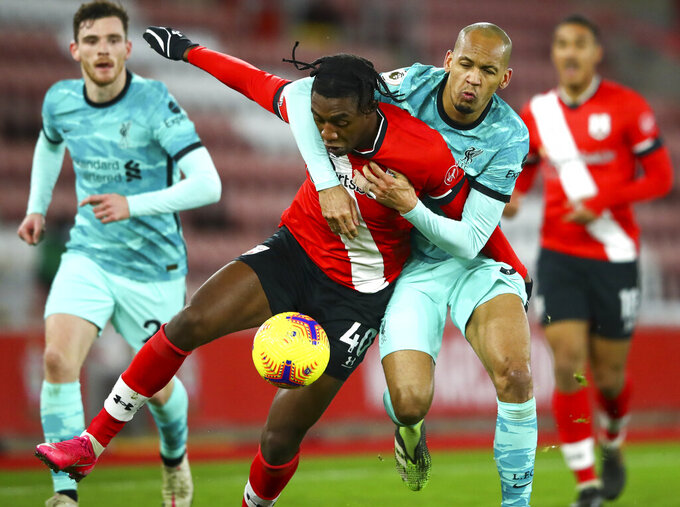 United climbed above Liverpool, its fiercest rival, into first place by beating Burnley 1-0 on Tuesday and looks set to challenge for the title for the first time since the retirement of long-time manager Alex Ferguson in 2013.

Liverpool has a chance to return to the summit when the champions take on United at Anfield on Sunday, but Fabinho said his team cannot be consumed solely with outlasting Ole Gunnar Solskjaer’s resurgent side.

“They are definitely confident and enjoying a good momentum in the league,” Fabinho said in a video interview from his home in Liverpool on Tuesday, before United’s win over Burnley. “They are winning some games that perhaps they weren’t last season, such as against Wolverhampton (1-0 last month).

“However, our focus isn’t exclusively on Manchester United. The main thing is trying to play our football and winning games.”

Fabinho sees Manchester City, also in good form in recent months, as another title candidate and isn’t ruling out a charge by London teams Chelsea and Jose Mourinho’s Tottenham.

“(City) are very well trained and have been doing excellent seasons in the last three Premier League campaigns, so City are one of the contenders,” Fabinho said. “United are another one (and) I have said before that Tottenham and Chelsea are strong and want to go all the way.

“Perhaps Chelsea are going through some ups and down recently, but they are still a strong side. And we know that Tottenham, because of their manager and squad, are in the fight as well.”

Liverpool’s rivalry with United will get added spice in the coming weeks, with a heavyweight meeting in the fourth round of the FA Cup at Old Trafford coming a week after their league match.

“Playing against Manchester United is always a big opportunity, it’s a derby,” Fabinho said. “I think the fans are excited to have the chance to watch two big games in a short period.

“We are keen to improve our results in the FA Cup in comparison to the previous seasons. So we must be fully focused, it’s the only way to beat such a strong rival.”

Liverpool, which ended a 30-year wait for a league title last season, hasn’t won any of its last three league games — its last top-flight outing was a 1-0 loss at Southampton — and Fabinho acknowledged this season has been a struggle amid the pandemic.

“This current season we are seeing many big teams losing points that they normally don’t lose,” he said. “Perhaps the short preseason affected in the beginning, perhaps playing behind closed doors has an influence too.”

Some have questioned whether the league should continue with the new variant of COVID-19 causing surge in cases, both in football and wider society.

“Recently, before these last weeks when the number of cases has increased, the situation was kind of normalized in the training ground. We are being tested for the COVID very often. So we were doing things, like using the restaurant, more or less as normal,” Fabinho said. "But now with these new cases, we have more restrictions, so the restaurant can’t be used and the club is taking the appropriate precautions.

“They are delimiting some paths we must follow at the training ground, sometimes you need to walk around to reach a place beside you. Away from the club they ask us to use masks and gloves, they gave this material. The club is aware it’s difficult to just stop doing everything, like shopping. But they do everything possible to help us.”

Fabinho sees no reason to be concerned about Liverpool losing star forward Mohamed Salah, who said in a rare interview — given to Spanish newspaper AS last month — that “everything’s in the club’s hands” when asked about a potential move to Barcelona or Real Madrid.

“Big players will always have their names involved in rumors,” Fabinho said. “Salah plays (for) Liverpool, one of the biggest teams in the world. So I think it’s normal to see his name linked to other teams, especially from different leagues.

“Anyway, I see him very happy here and pleased with his performances this season. He’s very demanding with himself, he wants to be the best, he wants to help the team and works hard for it. It’s always been the case and it hasn’t changed at all. He keeps scoring goals, which everyone is used to seeing. In the changing room he’s always talking to everyone and making jokes. I don’t see anything affecting him.”