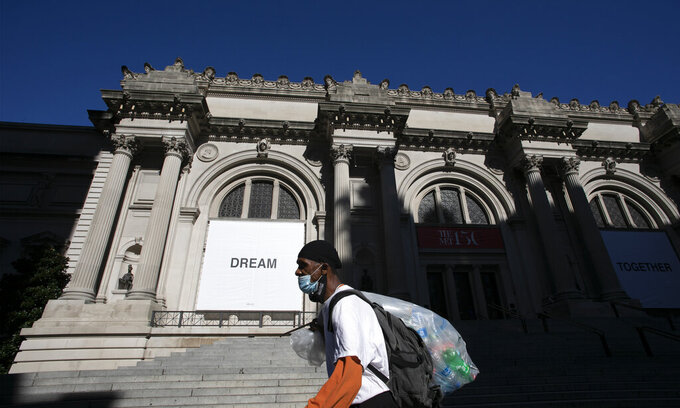 A man walks past a banner by artist Yoko Ono at the Metropolitan Museum of Art, Thursday, Aug. 20, 2020, in New York. Ono's two banners on the front of the museum say "Dream Together." The museum will reopen to the public on Aug. 29, 2020. (AP Photo/Mark Lennihan)

When the iconic T. Rex at the American Museum of Natural History again welcomes visitors, it will gaze down at humans acting a bit differently.

They will still gape up at its massive skeleton, but there will be fewer of them. They’ll stand farther apart and wear masks. Other pandemic precautions will include hand sanitizer stations and one-way signs guiding guests through exhibits.

The museum is like many cultural institutions in the city gingerly reopening their doors, weighing the safety of visitors and staff with the need to educate, inspire and support New York's recovery.

“We have to re-imagine and re-engineer the museum visit,” says museum President Ellen Futter. “We want to fulfill our civic mission. And we think that our mission has never been more important.”

New York City was by far the hardest-hit U.S. city by the pandemic. It’s also home to world-class cultural institutions that have for decades — and city leaders hope will once again — draw millions.

The Museum of Modern Art opens Thursday, and The Metropolitan Museum of Art reopens its Upper East Side home on Saturday. The American Museum of Natural History plans to reopen to the public Sept. 9.

Some of the new rules might make future trips to a museum less spontaneous and escapist, but there are some benefits.

“It’s true that it will be less crowded. It also will be more intimate and it may give people a different view of things. I don’t think that will diminish in the least the sense of the visit,” said Futter.

Whether anyone will come is the big question.

Welcoming back visitors is also a chance to end months of lost ticket sales. Each facility has different financial models but for those that rely heavily on attendance, the pandemic has been crippling. The Natural History Museum alone has lost as much as $120 million.

While MoMA is looking at “significant losses” for up to three years, it has decided not to charge visitors for the first month. “It just felt like the right gesture," said Lowry. "I think once you’ve lost a lot of money, losing a little bit more isn’t really the big issue.”

To add to the financial burden, most museums have been forced to pay for safety upgrades, like more staff, touchless bathrooms and costly air filtration systems.

“Every institution is having to look long and hard at their financial model and scale back, postponing and canceling programs and events while simultaneously pushing forward on all fundraising cylinders," said Regan Grusy, vice president of strategic partnerships at the New Museum.

The pandemic hit only a few months after MoMA reopened in October following a $450 million expansion. Back then, visitors were greeted in the lobby with an enormous Haim Steinbach banner that read: “Hello. Again.” It's been replaced: Now they'll see a Milton Glaser piece that reads “I (HEART) NY.”

“This is a moment to assert the resurgence of New York,” said Lowry. “New York has gone from this huge magnet of tourism to being a city that’s just about itself because the tourists aren’t around. So with all of that, we felt this was a more powerful welcome.”

The Metropolitan Museum of Art was one of the first in the city to close and, with no federal guidance, stepped up to help lead a working group of about 25 museums in the city sharing information and creating protocols.

“The question we all face is, ‘How long will we have to limit the numbers of visitors?’ If the answer is ‘Five years,’ it would be devastating,” said Met President and CEO Daniel Weiss.

His institution has even taken on COVID-19 with art: The Met sells face masks with floral details from paintings in its collection by Claude Monet and Vincent van Gogh. “We're trying to make the best of it,” said Weiss.

The Corona neighborhood in Queens was one the hardest-hit sections of the hardest-hit city. Yet it is home to a museum not built for pandemics — the hands-on, highly interactive New York Hall of Science.

The Hall prides itself on being a place where children engage with the exhibits — controlling mock space rovers, exploring digital environments and experimenting with circuits. It is not willing to change its goals and go touchless or remove exhibitions. It hopes to reopen next spring.

Though the doors are closed, the Hall hasn't been silent. It's helped donate thousands of meals, turned a parking lot into a drive-in movie theater, encouraged research and hosted a mobile testing site on campus.

Like many museums, it has put many new resources and access to its offerings online, accelerating a pre-pandemic trend.

“This is the time to think about the limitless possibilities when time and space mean something completely different,” said Grusy.

When the Hall of Science does open, it will have a new exhibit exploring the different ways cultures experience happiness.

It will be called The Happiness Experiment, and Honey is tickled by the notion. “I love the idea of reopening with an exhibit that’s focusing on happiness.”

Over in Manhattan, the silent T. Rex at the Natural History museum may actually put the pandemic into perspective. It reminds visitors they are part of a churning evolution.

“We’ve seen great challenges and really deeply disturbing times before, but we’ll get through this,” said Futter. “And the museum reopening is part of that for us, for our visitors and for the city. And we’re very excited about it.”