Faceoff between Hanyu and Chen easily goes to Olympic champ 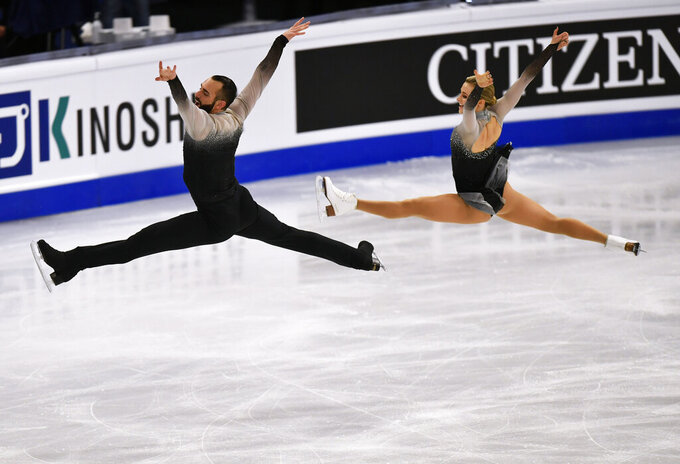 STOCKHOLM, Sweden (AP) — The faceoff between Yuzuru Hanyu and Nathan Chen was no contest.

Japan's Hanyu, looking every bit the champion of the sport, won the short program Thursday at the World Figure Skating Championships, distancing himself from Chen when the American fell on his opening quadruple lutz while Hanyu was sheer perfection.

Hanyu has been the sport's biggest attraction for two Olympic cycles, each of which ended with him wearing a gold medal. He showed why in a short program packed with difficulty, style, artistry and a ton of energy.

His body rotation on his jumps — a quad salchow, triple axel and quad toe loop-triple toe loop combination — was so fast it was almost imperceptible. His musical selection, “Let Me Entertain You,” by Robbie Williams, matched Hanyu's frenetic performance that, had there been spectators on hand, would have left them as breathless as the skater.

“It is something we wanted everybody to enjoy, of course, and we came up with this program,” Hanyu said through an interpreter, though he is fluent in English. “It would become an even better program if we have a live audience and the clapping and cheering. Everybody is tuning in on the internet and TV, and I can actually feel that, and I am accepting all that energy on the ice when I am skating this program.”

No, there weren't fans on hand at the Ericsson Globe because of the coronavirus pandemic. Had they been, they certainly would have littered the ice with the Winnie the Pooh dolls that have become a Hanyu trademark. Renowned coach Brian Orser, a Pooh bear in hand holding a yuzu fruit (a Japanese citrus) by the sideboards, leaped high with every brilliant element by his skater.

“About today's performance, I am overall very satisfied, but there is still lot of room for improvement that I know,” Hanyu said. “This music is full of energy and choreography and I think I was able to put out all of that on the ice today.”

There were no celebrations from the Chen camp. The two-time defending world titlist hasn't lost a competition since the 2018 Olympics. But he's now more than eight points behind Hanyu's 106.98 points. And Hanyu's countryman, 17-year-old sensation Yuma Kagiyama, is between the two favorites in second place.

Chen, winner of the past five U.S. titles, struggled early in his program, similar to what happened at the Pyeongchang Olympics. He rallied Thursday, however, by sticking a triple toe loop on the back end of his quad flip so he would have a required combination. And his spins and footwork were strong and intricate.

But the fall did him in.

“I made a big mistake right off of the bat,” Chen said. "I had to figure out how to regroup. Mistakes happen. I’m glad I had this opportunity to learn from and move forward.”

As for rallying to a third consecutive world crown — no American has managed that since Scott Hamilton's fourth in a row in 1984 — Chen wasn't thinking that way.

“Medals are things that are out of my control. I feel like I am putting myself in the wrong mental state if I focus on that," he said. "I’m going to take some time to analyze what happened with the quad lutz and do it better.

"Whatever the results are, I want to skate better, be better.”

Beyond the top tier, it was a flop-fest for several of the top men: Olympic silver medalist Shoma Uno, American Vincent Zhou and China's Jin Boyang.

Zhou, a bronze medalist at the 2019 worlds — the event was canceled last March because of the pandemic — had one of the worst skates of his young career. Zhou fell on his quad lutz, under-rotated on his combination quad salchow-triple toe loop and then fell on a triple lutz. Looking bewildered by such a poor performance, Zhou plummeted to 25th and did not qualify for the free skate on Saturday.

“Clearly that’s not a result that I even wanted to consider coming into this competition. It’s disappointing," Zhou said. "To me, it feels like I let down my teammates and myself, but dwelling on those things is only going to make me feel worse. I’m probably going to be miserable and then not dwell on it. I can’t let today get to my head.”

Uno crashed hard on his triple axel, while Jin, a two-time world bronze winner, fell on a quad lutz and then messed up the second jump in his combination. Uno wound up sixth, Jim was 19th.

Ever-entertaining American Jason Brown, who doesn't have the jumps of the top men but is masterful in all other aspects of skating, was seventh.

Russians Anastasia Mishina and Aleksandr Galliamov, in their first worlds, were spectacular in capturing the gold medal. Their complex technical elements for the free skate, including exceptional lifts capped by Mishina riding Galliamov's back for nearly half the rink, were accompanied by lots of vigor in a routine to Queen music.

That performance lifted them from third place and past two-time world winners Sui Wenjing and Han Cong of China, who were plagued by several mistakes on side-by-side jumps.

“We’re really surprised to come in first," Mishina said. "I don’t know what to say for the moment because we don’t understand it yet.

“Thanks to everybody who supported us. Maybe we didn’t have anyone here but we know a lot of people watched on television and we felt the support.”