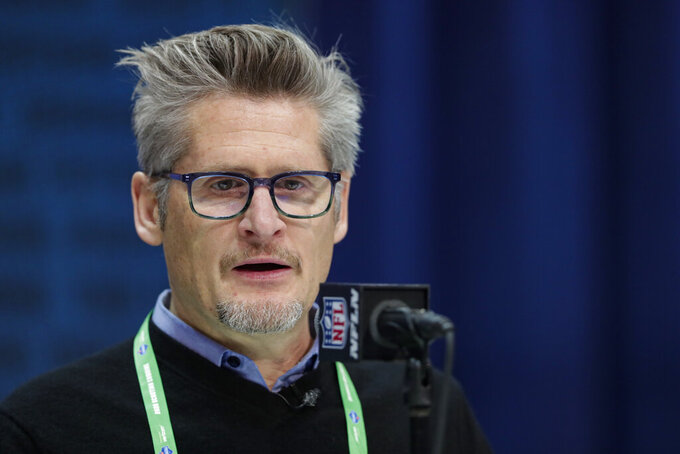 FILE - In this Feb. 25, 2020, file photo, Atlanta Falcons general manager Thomas Dimitroff speaks during a press conference at the NFL football scouting combine in Indianapolis. Dimitroff will be operating his 13th NFL draft as the Atlanta Falcons' general manager from the solitude of his home, following the mandate placed on each team by commissioner Roger Goodell. Dimitroff has made a trade in each of his 12 previous drafts. Don't bet against the trade-happy GM extending that streak this year. (AP Photo/Michael Conroy, File)

ATLANTA (AP) — “Trader Tom” is facing a new challenge as the coronavirus pandemic pushes the NFL draft away from war rooms and into a new virtual world.

Thomas Dimitroff will be operating his 13th NFL draft as Atlanta Falcons general manager from the solitude of his home.

Following the mandate placed on each team by commissioner Roger Goodell, Dimitroff will be the only team official at his home during the draft.

Dimitroff has made a trade in each of his 12 previous drafts. Even in this time of sheltering at home, don't bet against the trade-happy GM extending that streak in next week's draft.

Draft-day communications may be awkward, but Dimitroff said, “I don’t think it’s going to dissuade people necessarily from trading.”

“You can imagine the outcry,” Dimitroff said. “No one wants to limit. Everyone wants to trade. It is a trade league now with this general manager group. It’s not like back in the old days where people sat a little bit more stoically on the approach."

The Falcons have the No. 16 overall pick following their second consecutive 7-9 finish. Coach Dan Quinn saved his job with four straight wins to finish 2019. The pressure is on Quinn and Dimitroff to make the playoffs in 2020.

Dimitroff already has had a busy offseason. He addressed one of the team's pressing needs by acquiring tight end Hayden Hurst in a trade with Baltimore. The Falcons gave up one of their two second-round picks in the trade, which came after the team cleared salary cap room by cutting four veterans, including running back Devonta Freeman and cornerback Desmond Trufant.

Dimitroff then used the cap space to sign outside linebacker Dante Fowler to a $48 million, three-year contract and r unning back Todd Gurley to a $6 million, one-year deal.

After drafting right guard Chris Lindstrom and right tackle Kaleb Gary in the first round in 2019, the Falcons could take a defense-first approach. The additions of Gurley, Fowler and Hurst leave cornerback as perhaps the team's most pressing need.

“That’s definitely one of the topics that Thomas and I have spent a lot time on,” Quinn said when asked about the team's need at cornerback.

Among cornerbacks who could be available at No. 16 are Florida's CJ Henderson and Alabama's Trevon Diggs.

Following the release of Trufant, Atlanta's top cornerbacks are Isaiah Oliver and Kendall Sheffield, added in the 2018 and 2019 drafts, respectively.

The Falcons, who ranked near the bottom of the league last season with 28 sacks, could draft an edge rusher to complement Fowler. They also could look for help at defensive tackle, where Grady Jarrett and Tyeler Davison are probable starters. On the offensive line, left guard and a swing tackle are areas Quinn said remain “a big focus for us.”

MORE HELP AT RUNNING BACK

The Falcons could add depth at running back after signing Gurley. The decision could be complicated because Gurley has a history of problems with his left knee, even though he played in 15 games in 2019. The Falcons and other teams cannot give physicals to free agents during the coronavirus pandemic.

The Falcons have Ito Smith, Brian Hill and Qadree Ollison returning at running back. Ollison (6-1, 232), a fifth-round pick in 2019, gave the Falcons a big back. Dimitroff said the team still could add “another back in the draft that potentially has speed.”

Dimitroff is worried about having to trust technology while wondering what might happen if he encounters Internet problems. He wants to know what would happen “if I’m on my cellphone talking to ... the league office about ready to give my pick and it goes out, how much leeway are they going to give us."

He even joked about another safety concern: how to handle hecklers who show up at his house.

“I have this vision of five guys with Hazmat suits outside my house wandering around and trying to dissuade the fan base from heckling outside on the sidewalk,” he said.