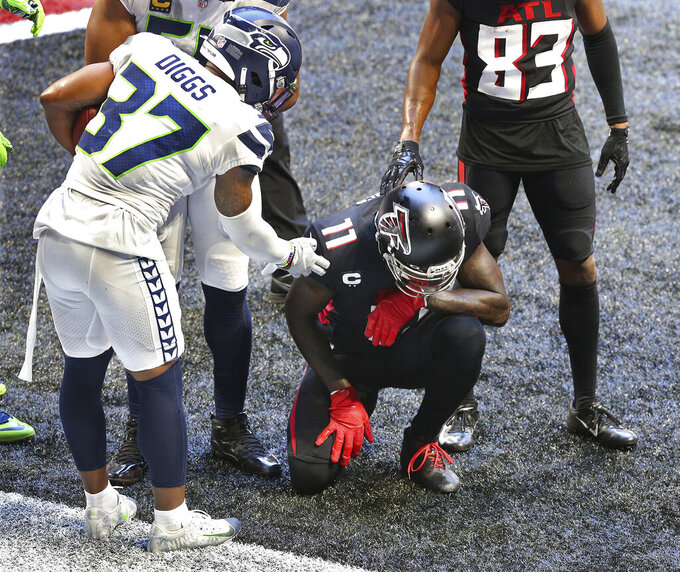 The winless Atlanta Falcons will be playing without star wide receiver Julio Jones for Sunday’s game with the unbeaten Chicago Bears.

Among the other notable inactives around the NFL for Sunday's early games, Tennessee receiver A.J. Brown will miss his second straight game with a knee injury with the Titans at Minnesota. Tennessee outside linebacker Vic Beasley Jr., a key offseason acquisition, makes his Titans debut after missing the first two games with a knee injury.

For the Vikings, rookie cornerback Cameron Dantzler misses his second straight game with a rib injury, and another starter, Mike Hughes, is out with a neck injury. That leaves Holton Hill and rookie Jeff Gladney as the top two cornerbacks on a depleted, struggling defense.

The Patriots will be without starting center David Andrews and rookie linebacker Josh Uche when they host the Raiders after both were placed on injured reserve. Running back James White also will be out for the second straight game following the death of his father.

Andrews missed practice all week with a hand injury and Uche was hampered by a foot injury. Andrews spent the 2019 season on IR with a blood clot issue in his lungs but started the first two games of this season.

The Raiders will be without speedy rookie receiver Henry Ruggs III because of injuries to his knee and hamstring. Ruggs was ruled out along with starting right tackle Trent Brown and linebacker Nick Kwiatkoski.

Brown has been sidelined by a calf injury since leaving the opener at Carolina after one series. Kwiatkoski injured his pectoral muscle later in that game and will miss his second straight week.

In Buffalo’s game with the Los Angeles Rams, Bills linebackers Tremaine Edmunds (right shoulder) and Matt Milano (hamstring) returned after missing one game. Both were listed as questionable on Friday. Veteran tight end Lee Smith was active for the first time this season with starter Dawson Knox out with a concussion.

For the Rams, running back Cam Akers has been ruled out because of a rib injury, while running back Malcolm Brown is active after hurting his left pinky finger last weekend.

In the Texans-Steelers game, Houston has made defensive tackle Ross Blacklock inactive a week after the rookie second-round was ejected from a loss to Baltimore for shoving after the whistle, a move that drew condemnation from his teammates.

The Steelers will have Pro Bowl right guard David DeCastro active for the first time this season. DeCastro missed the first two games because of a left knee injury. Wide receiver JuJu Smith-Schuster, who sat out practice early in the week with a knee issue, will also play for the unbeaten Steelers.

The Cleveland Browns will at least have one of their projected starting cornerbacks against Washington as Denzel Ward will play against Washington after being listed as questionable with a groin issue. Ward worked out on the field before the game and was cleared to go.

Cleveland’s other starting cornerback, Greedy Williams, will miss his third game with a shoulder injury sustained in training camp. Defensive end Olivier Vernon is out again with an abdominal injury.