Fall from pinnacle is a rapid one for Liverpool, Klopp 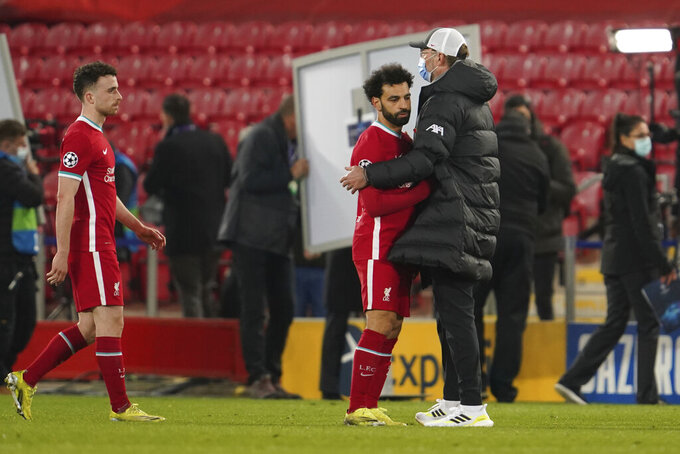 LIVERPOOL, England (AP) — Even when his players were basking in the afterglow of ending Liverpool’s 30-year English title drought, Jürgen Klopp was quick to temper the giddiness.

“When you think you have reached the pinnacle,” the Liverpool manager told them last July, “you are already on the way down.”

It has turned out to be a long way down this season.

Those few weeks last year when Liverpool reveled in simultaneously being English, European and world champions seem a distant memory.

World domination can be so fleeting. No wonder Klopp tempered any talk of building a dynasty after lifting the Premier League trophy for the first time last July.

It will be surrendered, almost certainly to Manchester City, before there was even a chance to parade it in front of fans, as pandemic restrictions persist.

The trophy cabinet will be empty again by the end of this season. Real Madrid made sure of that by ending the pursuit of a seventh European Cup on Wednesday.

A rare positive in this season of shortcomings by an injury-ravaged defense was the inexperienced Nathaniel Philipps helping to prevent the Karim Benzema-led attack from scoring at Anfield. But it was Liverpool’s own blunted attack that impeded the task of overturning the 3-1 first-leg loss to reach the semifinals of the Champions League.

How Mohamed Salah will rue not adding to his 28 goals this season, denied by goalkeeper Thibaut Courtois and his inability to find the target in the 0-0 second leg. How expected perhaps of Roberto Firmino to squander chances — as happened a minute into the second half — when you’re a forward with just one goal in 20 games.

How much longer will Salah want to stick around to be part of a squad rebuilding, especially when there’s little sign of significant investment to give the Egyptian support up front or protection at the back?

The net outlay of around 40 million pounds ($55 million) proved inadequate to build on the title win compared to pre-season strengthening by the teams that have ended up as England’s remaining Champions League semifinalists — Chelsea and Manchester City.

While the foundations for City’s quadruple chase were funded by Abu Dhabi’s sovereign wealth and Chelsea witnessed another spending splurge by Russian billionaire Roman Abramovich, Liverpool’s ownership group from the Boston Red Sox took a more restrained approach during the pandemic.

Diogo Jota and Thiago Alcantara, two of the main summer signings, were only deemed worthy by Klopp of playing the last half-hour against Madrid on Wednesday.

Look now at the Premier League and Liverpool is sixth in a standings it won by 18 points last season as Manchester City coasts 11 points in front of Manchester United.

The story of the collapse can overlook the fact Liverpool was in first place in the second half of the December. City has made up being eight points behind Liverpool to surge 22 point ahead of a side whose injury-depleted resources became too stretched to cope with the demands of a season without breathing space due the pandemic-compressed schedule.

The warning signs were there when Liverpool was humiliated 7-2 by Aston Villa in the fourth match of the title defense. Then again in the 19th round when Burnley won 1-0 at Anfield. The end of Liverpool’s 68-game unbeaten home run came with another 10 days remaining in the transfer window but only cheaper attempts at a quick-fix were made to fill the void left by center backs Virgil Van Dijk and Joe Gomez being long-term injury absences.

Eight of their last 15 league matches were losses, but a trio of successive victories have put Liverpool back in sight of the top four, with a gap of only three points now to close. More than a $100 million is riding on Liverpool doing so. But beyond the necessity of collecting the UEFA windfall by returning to the Champions League is the potential loss of prestige and key players not wanting a season of toils in the Europa League.

The challenge is for Klopp and the team he labeled “mentality monsters” is to rediscover that spirit.

“I think we are not in a bad moment,” Klopp said. “We have to keep fighting. We want to be in the Champions League next year but in the moment we still have to pick up more points than a lot of other teams.”

A team so dominant a year ago is now playing catchup. Klopp has to find a way of ensuring his words after the Premier League title glory of 2020 don't prove prescient.

“It’s not the only thing I want to talk to the boys about when I meet them in 20 years’ time,” Klopp said.