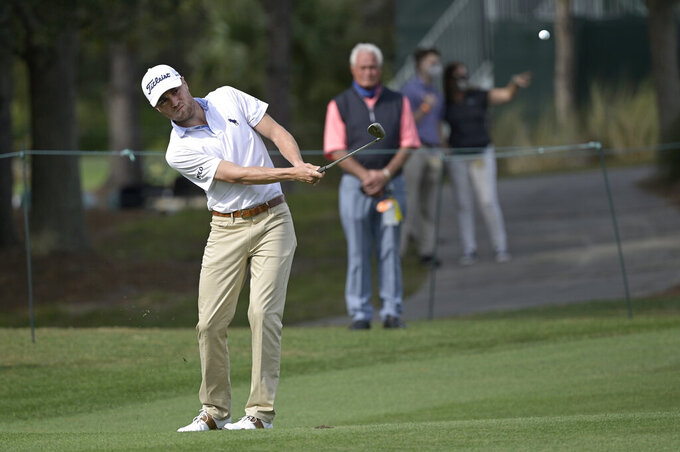 Justin Thomas hits onto the 18th green during the final round of the PNC Championship golf tournament, Sunday, Dec. 20, 2020, in Orlando, Fla. (AP Photo/Phelan M. Ebenhack)

KAPALUA, Hawaii (AP) — Xander Schauffele already is a footnote in PGA Tour history as the first player to post the lowest score in a stroke-play tournament without getting credit for the win.

He wouldn't mind being another asterisk at Kapalua.

No one has ever gone more than a year without winning and ended the drought at the Sentry Tournament of Champions. Winning is the only way to get to Maui at the start of the year, so Schauffele and 15 other players ordinarily wouldn't be here. Except that 2020 was no ordinary year.

Because the COVID-19 pandemic shut down the PGA Tour for three months, the winners-only field at Kapalua was expanded to include anyone who made it to the Tour Championship.

“I got an asterisk for winning the Tour Championship that counted in certain things and not in others,” Schauffele said. “I'm all about entering weird categories, I guess. This is what I do.”

Schauffele finished at 15-under 265 at the Tour Championship, the lowest score by three shots. But the FedEx Cup finale now has a staggered start based on the standings, and top seed Dustin Johnson (who started at 10-under par) was crowned the champion. Schauffele only received first-place world ranking points, but no trophy.

Part of him believes he earned his spot at Kapalua. And part of him is just happy to be here.

“It's called the Tournament of Champions. I'm fortunate and lucky to be here,” he said. “You should win to be here. It's a bonus for winning. I always want to be here and we'll do everything in our power to be here.”

The 42-man field is the largest in tournament history by adding players who reached the FedEx Cup finale, a list that includes two players — Scottie Scheffler and Abraham Ancer — who have never won on the PGA Tour.

Another addition is Billy Horschel, who would like to see the one-time criteria stay that way. Horschel said such a proposal has been presented to the Player Advisory Council.

“I think it's good, something they should do permanently,” Horschel said.

He believes it would benefit the title sponsor, Wisconsin-based Sentry, along with the field next week in Honolulu. Horschel said the tour has crunched numbers and in a normal year, it would add eight to 10 players to Kapalua. He also said a reduction to three FedEx Cup playoff events makes it harder to reach East Lake, and those players should be rewarded.

Whether it goes any further than the PAC is doubtful.

The tour has contemplated an expanded field over the years, such as giving a two-year exemption to Kapalua for winning a tournament. Sentry, in its fourth year as the sponsor, likes the exclusivity of being the toughest field to make all year.

Besides, the name of the tournament would have to change. “Tournament for really good years” doesn't hold much appeal.

It fits for Schauffele, who did everything but win (even with the low score at East Lake).

He needed two putts from 35 feet on the final hole last year to win at Kapalua, only to three-putt for par in 30 mph gusts. That led to a three-man playoff won by Justin Thomas. He also had chances at Colonial and Shadow Creek.

And he's lucky to be back at Kapalua in other ways. Schauffele tested positive for the coronavirus a week before Christmas, and he finished the self-isolation in time to make the trip to Maui.

“I got COVID, and the reason I'm here is because of COVID, so there's always a couple ways to look at it,” he said. “But yes, it is very strange to play in a Tournament of Champions without an official win.”

Kapalua also is the first tournament for Johnson since he won the Masters on Nov. 15. He decided not to play in the Mayakoba Classic and arrived last week on Maui to start shaking off the rust. Johnson and Thomas have played every year since 2016, the longest active streak for the winners-only event.

For others, Kapalua is a welcome return.

Sergio Garcia, who won the Sanderson Farms Championship, returns for the first time in 15 years. The former Masters champ has been eligible before, though like several Europeans, he often limited travel because he started his new year in the Middle East. Stewart Cink hasn't played in 11 years.

“It's always great to start the year in Maui because it's Maui, but also it means that you've done something that's worthy of an invite here,” Cink said.

Adam Scott returns for the first time since 2014. He has missed previous years from playing in Australia deep in the year and needing something of an offseason. Because of the pandemic, Australian tournaments were canceled. Scott has been in Switzerland with his wife and three children, and only recently stopped over in the Bahamas to start practicing.

He moved up his practice so he could spend the afternoon surfing, but later was spotted on the putting green.

“No waves,” he said, though clearly not the end of the world.