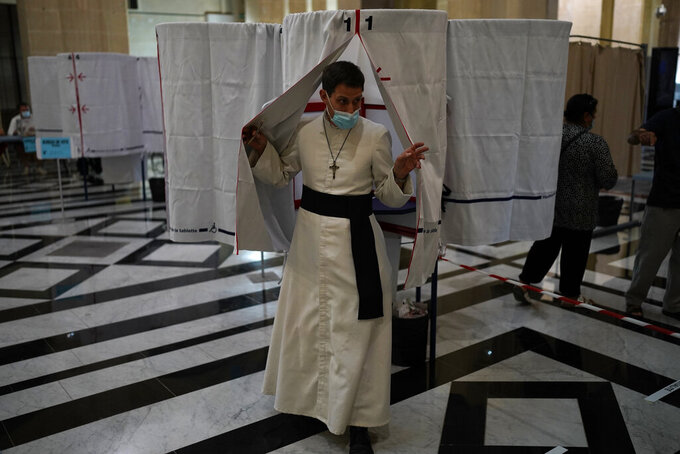 Priest Eloi Gillet leaves the voting booth as he votes for the regional elections in Marseille, southern France, Sunday, June 20, 2021. The elections for leadership councils of France's 13 regions, from Brittany to Burgundy to the French Riviera, are primarily about local issues like transportation, schools and infrastructure. But leading politicians are using them as a platform to test ideas and win followers ahead of the April presidential election. (AP Photo/Daniel Cole)

What was meant to be a vote centered on local concerns like transportation, schools and infrastructure turned into a dress rehearsal for next year's presidential vote, as would-be presidential hopefuls seized on the regional campaign to test ideas and win followers. Macron's rivals on left and right notably denounced his government's handling of the pandemic.

The wrangling appeared to turn off some voters, and less than 34% showed up, according to polling agencies. Politicians across the spectrum pleaded with the stay-at-home voters to wake up for the decisive second round June 17.

Le Pen called the low turnout “a civic disaster that deformed the electoral reality of the country, and produces a misleading vision of the current political forces.”

The result is a clear setback for Le Pen's National Rally, though it came in second place in most regions, according to early official results and polling agency projections. It is hoping to win control of a region for the first time to boost her decade-long effort to legitimize a party long seen as an anti-democratic, anti-Semitic pariah.

It had been riding high in pre-election polls and had steered campaign discourse toward its favored subjects of policing and immigration – though both are issues handled by the central government and not regional councils. The party dominated the first round of the last regional elections in 2015, but collapsed in the runoff as parties and voters banded together against it.

The result is also a deep embarrassment for Macron, whose young Republic on the Move party had hoped to establish a regional foothold for the first time but failed to excite voters.

Projections from three polling agencies show the conservative Republicans party, which currently runs seven of mainland France's 13 regions, won the most overall votes Sunday, at between 27-29%.

They were followed by the National Rally at 18-19%, then the Socialist Party and its allies, the Greens party, Macron's Republic on the Move and far-left France Unbowed. Early official results from each region reflected a similar breakdown.

Parties that win more than 10% of the vote advance to the runoff, which will determine the number of seats each party gets on regional councils.

Many polling stations stood largely empty as voting kicked off in schools and community centers from Marseille on the Mediterranean coast to Le Touquet on the English Channel. Those who did show up to vote had to stay masked and socially distanced and carry their own pens to sign voting registries.

The posturing by potential presidential contenders frustrated voters like Patrice Grignoux, a 62-year-old tech consultant casting his ballot in Paris.

“The presidential election is a world in itself,” he told The Associated Press. “When you take Brittany or the Paris region, it’s totally different. The north is also completely different. ... There are issues you find at a regional level but have nothing to do with national issues.”

A key battle was in the Hauts-de-France, a swath of northern France that includes the port of Calais, where five of Macron’s government ministers joined the campaign – but his party didn't even reach the runoff, according to early results.

Another race to watch is the region that includes Provence, the French Riviera and part of the Alps, where National Rally candidate Thierry Mariani appeared to have a slimmer-than-expected lead over the conservative incumbent. Mariani has said he wants more police and no more public funding for groups promoting individual communities, which many see as targeting Muslim associations or LGBTQ movements.

The virus played only a minor role in the voting. As infections have ebbed and vaccinations spread, the French government recently reopened long-shuttered restaurants, shops and travel possibilities. Beginning Sunday, the prime minister scrapped an unpopular overnight coronavirus curfew, just in time for the election.