Farmer who donated mask to New York honored with degree 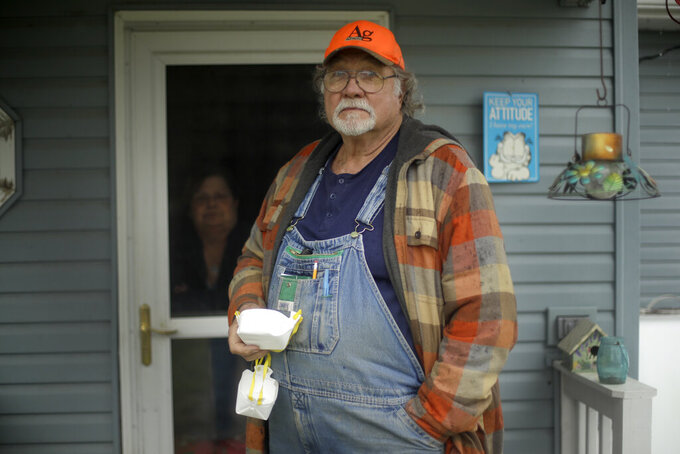 Dennis Ruhnke holds two of his remaining N-95 masks as he stands with his wife, Sharon at their home near Troy, Kan. Friday, April 24, 2020. Dennis, a retired farmer, shipped one of the couple's five masks left over from his farming days to New York Gov. Andrew Cuomo for use by a doctor or a nurse. (AP Photo/Charlie Riedel)

A degree has been bestowed upon a retired Kansas farmer who shipped one of his five N-95 masks to New York Gov. Andrew Cuomo despite worries amid the coronavirus outbreak for his wife who has one lung.

Kansas Gov. Laura Kelly and Kansas State University President Richard Myers awarded the bachelor’s degree Tuesday to Dennis Ruhnke, of Troy, Kansas. Ruhnke was just two credits away from earning his degree in 1971 when he left school after the death of his father so he could help take care of his mother and the family farm.

Kelly said that Ruhnke “perfectly encapsulates K-State’s democratic mandate to be of service to people.”

Ruhnke wrote last month in a hand-written letter that also was signed by his wife, Sharon, that the mask was left over from his farming days. He asked that it be given to a nurse or doctor.

Cuomo read the entire letter at one of his daily briefings. He described Ruhnke's action as an example of courage and generosity in dark times.

Ruhnke has said he was surprised at the public attention.