In fashion: No. 8 BYU interested in wins, not style points 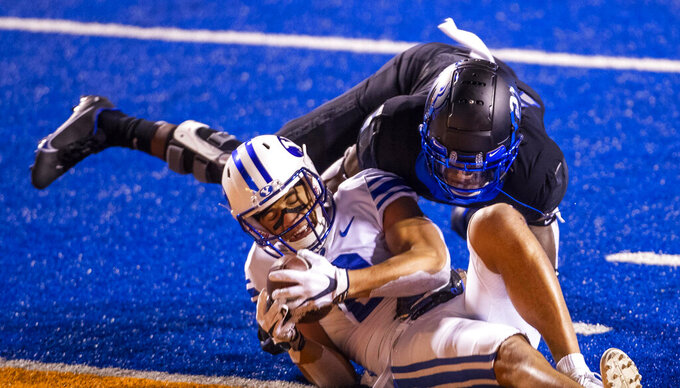 Kalani Sitake teased that his sense of style includes clothing given to him for free and that has some form of “BYU” branded on it.

The Cougars coach just isn’t into fashion or statements.

That’s why any assertion that No. 8 BYU needs to beat North Alabama, a 47 1/2-point underdog, with “style points” on Saturday at home to impress voters wasn’t exactly an in vogue notion for him.

“We want to be at our best and whatever the scoreboard shows, I think if we’re at our best, we can live with the results,” Sitake said. “Whatever happens and how everybody evaluates it, they can see it however they want.”

With another strong showing, the Cougars (8-0) can make a compelling case for a high ranking by the selection committee, which will release the first College Football Playoff rankings of the season on Tuesday.

After that, it's the waiting game.

At the moment, the Cougars aren't scheduled to take the field again until Dec. 12 against San Diego State.

That's a long layoff and another reason to leave the decision-makers with a lasting impression this weekend.

Not that BYU is paying too much attention to its rise. The Cougars are focused on the task at hand as a win puts them in elite company. They're trying to join the 2001, ’84 and ’79 teams as the only ones in school history to begin 9-0.

“As far as expectations and all those things, that’s just background noise,” senior defensive lineman Zac Dawe said. “We understand what we need to do. Every single game is special. So it doesn’t matter who we play, doesn’t matter what time or the circumstances, we need to play every game at our best."

The Lions (0-3), who are in their third season of a four-year transition to Division I and the Football Championship Subdivision, will be facing a ranked FBS opponent for the first time in program history. North Alabama did play at Liberty on Oct. 3 — falling 28-7 — but the Flames weren’t ranked at the time.

“This will be the best football team that any UNA team has faced in the history of the program, hands down,” North Alabama coach Chris Willis said on the school’s website. “This will be a tremendous challenge for our guys in all phases of the game. They have some of the best skill players in the country. They have tremendous size and speed on the defensive front and their offensive line is powerful.”

Only the families of players and coaches will be permitted into LaVell Edwards Stadium in accordance with the state of Utah’s increased measures to curb the spread of COVID-19.

“Just to play in front of our loved ones and our family, it’s special,” Dawe said. “We know that people are still supporting us from their social distanced homes."

Sitake said COVID-19 testing within the team is “doing good” even as cases spike around the state. In Salt Lake City, the Utah Utes recently had games against Arizona and at UCLA canceled due to the virus.

“This thing is unpredictable," Sitake said. “They're doing as much as they can.”

Asked how he minimizes his potential exposure to the virus, offensive lineman Chandon Herring responded: "So I’m not the most social person in the world. I go to class. I go to football and I'm at home. I live in the basement. So I didn't necessarily have to change too much.”

BYU QB and Heisman Trophy hopeful Zach Wilson ranks in the top four in yards passing (2,512) and touchdown passes (22). He eclipsed 2,000 yards passing in a season in fewer attempts than any other Cougars quarterback, according to research by the school.

North Alabama's 1,681-mile trip to Provo marks the sixth-farthest excursion the Lions have made for a football game.

It’s also the second time they’ve traveled to Utah. They made their debut as an FCS program by beating Southern Utah 34-30 in Cedar City on Sept. 1, 2018.

“We're anticipating getting their best shot,” Sitake said. “You've heard me say this over and over again — we need to make sure they get ours as well.”